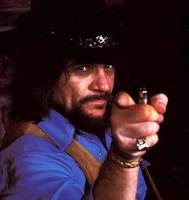 Some of the new “Outlaws” in country music will have you believe that getting some mud on their tires or drinking a little too much is tantamount to years of paying dues and sewing your true Outlaw oats like the original Outlaws did. So here’s ten reasons why today’s “Outlaws” will never live up to the legacy of one of the biggest country music Outlaws, Waylon Waymore Watashin By God Hoss Tecumseh Jennings.

1. Walking Off The Tom Snyder Show

In September of 1998, Waylon was scheduled to appear on the Late Late Show hosted by Tom Snyder. Going into the taping, Waylon was already a little bit sideways with the situation because he thought he deserved a full hour slot, but instead the show’s producers had him share the show with Dr. Laura. When Dr. Laura’s segment began to eat into Waylon’s time even more, he walked off the set, leaving Tom Snyder hanging.

It was early 1972, and Waylon Jennings wanted control of his music. He hired a New York lawyer named Neil Reshen—the same lawyer that helped Willie Nelson get out of his RCA contract—to renegotiate his with the Music Row giant.

“It was down to a $25,000 sum, and they we’re not going to give it to me. We were sitting there, not a word spoken, and the silence got unbearable. After a while, I couldn’t take it anymore. ‘Chet,’ I said, reaching over to a bowl on his desk, ‘where’d you get these peanuts?’ Neil glared at me. ‘Shut up, Waylon.’

You could hear a clock tick in the room. It got even quieter. Minutes passed. I rose up, never said a word, walked out. I went to the bathroom to take a leak. When I came back, Neil greeted me in the hall. ‘You’re a fuckin’ genius,’ he said.

“It was Kris Kristofferson’s night; he was a shoo-in for several categories. I had been scheduled to perform ‘Only Daddy That’ll Walk The Line.’ They said they were strapped for time, and they wanted me to cut the song to one verse and chorus. I said, ‘Why don’t I just dance across the stage and grin? Maybe do one line. That’ll give you a lot of time.’ They told me to not get smart. Either I did it or I got out. They said, ‘We don’t need you.’ I decided that was true, and I left.”

“Now they needed me again, because I was up for Best Male Vocalist, Song of the Year (‘I’m A Ramblin’ Man’), Album of the Year, and Entertainer of the Year. As I walked in with Jessi [Colter], scratching at my tuxedo, her telling me I should have hit them, Neil [Reshen] came over to me. ‘You won Male Vocalist,’ he whispered. ‘Jessi didn’t win anything.’ So much for secrecy. If nobody’s supposed to know the awards before they opened the envelope, how did word get around? My heart went out to Jessi, and though my first instinct was to get the hell gone, I thought that maybe by staying I could raise some of the larger problems that faced country music, such as its closed-mindedness and suspicion of change.

“I tried to be nice in my acceptance speech, thanking everybody for their support, though I knew that block voting and mass trading between the big companies—we’ll give you two hundred votes for your artist if you give your four hundred votes to our writer—probably had more to do with it than anything else.” 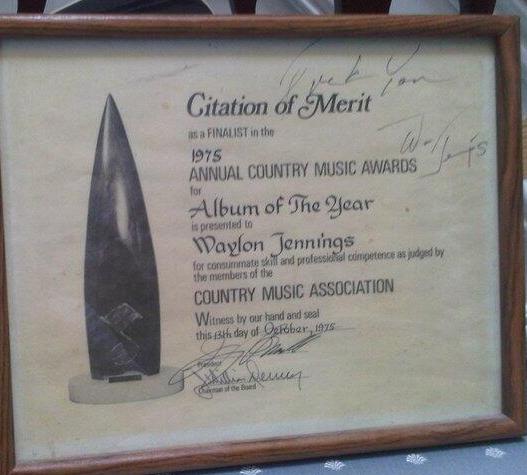 Because real Outlaws have the balls to show their gentler side.

“Joe Galante from RCA once called me and said, ‘Clint Black really likes you. Can we go to lunch and you can tell him some old Waylon and Willie stories?’ We met up with his manager, Bill Ham, and I started recounting. I told him of all the phones I used to destroy, dialing a number, putting it to my ear, and walking off. He listened to tales of Hillbilly Central and Dripping Springs, and Joe would keep encouraging me, saying, ‘Tell this story, Waylon, tell that one.'”

“After I got through talking, Clint pushed back from the table. ‘I can let you know one thing I’ve gotta do,’ he said. ‘I’ve got to get rid of this goody-two-shoes reputation I’ve got.’ Both Bill and Joe looked at him in horror. ‘No, no! We just wanted you to hear the stories!'”

8. Starting Up A Motorcycle in a Hotel Room At Midnight

For Waylon’s birthday in 1979, former Buddy Holly Cricket Joe B. Mauldin tracked down a vintage 1958 Ariel Cyclone motorcycle that used to belong to Buddy Holly, and put it inside of Waylon’s hotel room as a surprise.

“I walked into my hotel room after the show and saw it sitting there. What else could I do? I swung my leg over it, stomped on the kickstarter, and it burst into roaring life. First kick. It was midnight, and it sounded twice as loud bouncing off the walls of that hotel room. I knew Buddy wouldn’t mind.”

“You never do know where the stones you throw will land. One time, I was at an awards show, and I heard a voice behind me saying, ‘Mr. Jennings, you’re like a god to me.’ I turned around and it was Billy Ray Cyrus, offering his hand for me to shake. All I could think of was, if I’m your god, what does your devil look like?”

10. Writing and Recording “Are You Sure Hank Done It This Way?”

All quotes from Waylon – An Autobiography.