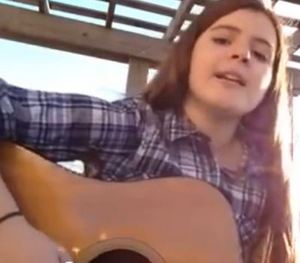 The country song protesting the direction of country music has in many respects just as much tradition and lineage in country music now as many of the genre’s other defining elements. From Waylon Jennings’ #1 single “Are You Sure Hank Done It This Way” in 1975, to the song “Murder on Music Row” that was the CMA Song of the Year in 2001, to Dale Watson and Hank Williams III’s recent chest-pounding protest songs, as long as the business of country music has been trying to veer the music off of its true path, there’s been artists willing to take a bold stand and speak out against it.

In many ways the country protest song has become so prolific in its own right, sometimes they can trend toward cliche in a somewhat similar vein to the songs they are looking to criticize. But to see such sentiment coming from a 15-year-old songwriter and performer in an original composition speaks to both the depth and degree of country music’s current wayward trajectory, and the wisdom and talent of the songwriter and performer penning such a tune.

Williamson Branch is a bluegrass and country band from Nashville, and their 15-year-old fiddle and guitar player Melody Williamson recently wrote a song called “There’s No Country Here.” Despite her age, Music Row would be wise to remove themselves for their laundry list clatter and listen to what the future of country music has to say about where country music is headed.