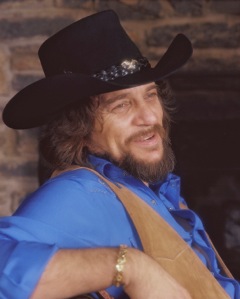 If you’ve ever wanted to own a piece of Waylon Jennings, you’re about to get your chance.

Guernsey’s Auctions out of New York City is getting ready to liquidate a massive 2,000-piece collection of items owned by Waylon Jennings from his Arizona estate, with the proceeds from the auction going to the Phoenix Children’s Hospital. The items are being offered for sale by Waylon’s widow, Jessi Colter, who was married to Waylon for over 30 years. The auction is set to transpire on October 5th at the Musical Instrument Museum in Phoenix.

What can collectors expect from this rare chance to own a piece of authentic Waylon Jennings memorabilia? Well for starters, there’s a pair of ornate leather boots once worn by Hank Williams that are adorned appropriately with a Phoenix on the front, and an ‘H’ in the middle for “Hank”. There’s also an authentic set of Willie Nelson’s famous Indian braids given to Waylon in 1983 by his long-time Outlaw friend to celebrate Waylon’s newly-found sobriety. There’s also the original contract signed by Waylon that officially formed The Highwaymen supergroup with Willie, Kris Kristofferson, and Johnny Cash, and a letter to Waylon from John Lennon. There’s also a leather-clad Telecaster being sold (though not the main one Waylon played). But the crown jewel of the collection will be the Ariel Cyclone motorcycle previously owned by Buddy Holly, and given to Waylon Jennings as a birthday present in 1979. 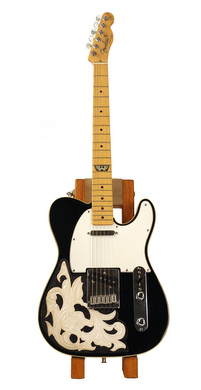 Waylon Jennings played bass for Buddy Holly right before he died in the plane crash in 1959 that was later memorialized in the Don McLean song “American Pie”. Waylon was supposed to be on that flight, but gave his seat up to The Big Bopper. 1 1/2 years before in May of 1958, Buddy Holly and his original Crickets flew in to Dallas’s Love Field airport on a connecting flight back to Lubbock after a big tour. But instead of flying, the three decided to purchase motorcycles and drive back.

“Then they went over to Miller’s Motorcycles, which specialized in English bikes,” Waylon recalled in his biography with Lenny Kaye. “There, Joe B, and J.I. (Allison) bought a Triumph each, a TR6 and Thunderbird, respectively, while Buddy picked out a maroon and black Ariel Cyclone, with a high compression 650cc Huntsmaster engine. They paid cash, bought matching Levi jackets and peaked caps with wings on them, and rode home through a thunderstorm.”

Then in 1979 for Waylon’s 42nd birthday, the two remaining Crickets Joe B. and J.I. tracked down the 1959 Ariel Cyclone, bought it back, and had it hand delivered to north Texas where Waylon found it sitting there in the middle of his hotel room after walking off stage that night.

“What else could I do? I swung my leg over it, stomped on the kickstarter, and it burst into roaring life. First kick. It was midnight, and it sounded twice as loud bouncing off the walls of that hotel room. I knew Buddy wouldn’t mind.”

The motorcycle was eventually put on display at Waylon’s home in Arizona.

Though Waylon was originally from Littlefield, TX, his Phoenix history runs deep. Waylon got his start as a solo performer at JD’s in Phoenix. Owner Jimmy D. Musiel pattered his club around Waylon and his Waylors as the house band. Waylon’s Arizona estate in the Phoenix suburb of Chandler is where he spent much of his time, and where he passed away on February 13th, 2002.

An auction catalog with detailed descriptions and pictures of each item is expected to be made available to the public for $32 from Guernesy’s later in August, and the items in the auction will be available for preview in Phoenix at the Musical Instrument Museum starting on October 3rd. Out of the 2,000 items, there will also be 500 lots, or groups of items that will be auctioned together. Telephone and online bidding will also be available.

Along with making the Phoenix Children’s Hospital lots of money, let’s hope some of the more important items end up where they can enjoyed not just by the high bidder, but by all of Waylon’s fans.