First off, I want to give recognition to the other two candidates for the Saving Country Music 2011 Album of the Year. Austin Lucas‘s album A New Home in the Old World is excellent, and probably my “favorite” album of the year, meaning the one I’ve listened to the most. Twang Nation named it their Top Pick of 2011, and I can’t argue with that. And Hellbound Glory won last year, and was nominated this year for the superb Damaged Goods, and with the strength of Leroy Virgil’s songwriting there’s no reason to think that every year they put out an album, they’ll be the perennial frontrunner for the award. 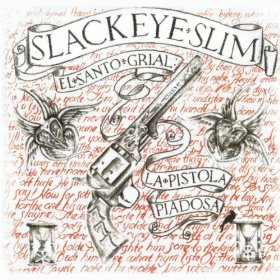 In the end though, you can’t deny the masterpiece, the magnum opus that is Slackeye Slim‘s El Santo Grial, La Pistola Piadosa. This was one of those years when one artist shot the moon, released an album that was years and years in the making, tirelessly and patiently crafted, and so bold in it’s vision and goal that it just can’t be denied.

I’ll start by admitting to it’s shortcomings, one of which is not to say it is some rehashed, spaghetti-Western soundtrack as some might conclude after a quick sniff, or not listening into the second half. What it is saddled with is a lack of accessibility, and accessibility is something that ideally a Saving Country Music Album of the Year would have, to act as an ambassador for what independent / underground country can be. Also ideally this award would go to an artist or band that spends more time out on the road, that is taking more risk for the music so they may be in a better position to benefit from accolades. 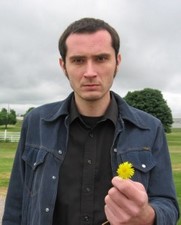 But it is not like Slackeye Slim is some newcomer studio wizard with no skins. He been around as long as most, and participated in the now legendary “Murder in the Mountains” tours in Montana which went a long way in forging a true underground network in country and roots music. And even though this album may not be accessible from a traditional standpoint, by defying genre or label, it broadens it’s audience beyond preconceived pockets of appeal. I can see folks who just like good music of any form really getting into this album, because it may not just be the best in 2011 in regards to independent country and roots or the country and roots worlds in general, it may be one of the best in all of music.

Any mild concerns one might have with El Santo Grial can be immediately swept off the table by it’s overwhelming strengths; the strength of songwriting, the grand vision and approach, the arrangement and instrumentation. Graham Lindsey should also be given special recognition for helping with this album. El Santo Grial sets such a high bar, it may be years before something impresses us like this again, and you have to go back years, for me all the way back to Hank3’s Straight to Hell in 2006 to find a rival, or peer.

I’ve given many albums two guns up, and have and will hand out many Albums of the Year. But there’s only two albums I’ve reviewed that I’ve ever felt confident enough to refer to as masterpieces, and Slackeye Slim’s El Santo Grial, La Pistola Piadosa is one.