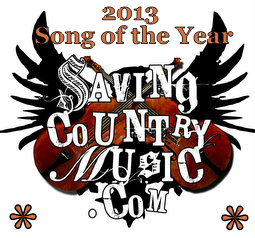 When you sit down to assemble a list of candidates for Song of the Year, you almost start to tremble in the face of so much creativity, inspiration, and insight, and grow humbled by how fortunate we are to live in such a bountiful time for music. Candidates for Song of the Year can’t just be songs we enjoy, they are songs that make you change the way you see the world, or change the way you see yourself.

Honorable mentions go to just about any song on John Moreland‘s Album of the Year candidate In The Throes. There were a few on the Brennen Leigh & Noel McKay‘s Before The World Was Made that nearly made it. Hank3‘s “Broken Boogie” was on the bubble, and would have made it in a year with a less-crowded field, and so would songs from some of 2013’s breakout female songwriters like Ashley Monroe, Caitlin Rose, Valerie June, and Brandy Clark, whose “Stripes” could have very well made it if the candidates were extended beyond the already hefty field of 10.

Written by Adam Hood and Brian Keane, “I’ll Sing About Mine” appears on 2012”²s Small Town Family Dream, but was released as a single with a new video in early 2013. It was 2013’s first strong Song of the Year candidate, and very well may be the best.

“The great thing about “I’ll Sing About Mine” is the non-judgmental, even-keeled manner with which it delivers its message. It takes a lot of patience and a lot of heart to say what this song says without flying off the handle or flipping birds. It makes its point with as few pointed words as possible”¦ It understands that really, few words need to be said, because deep down every human knows what’s real and what isn’t. They just have to be reminded, and then the momentum of the truth will do the rest.” (read full review)

There are so many artists, so many songs and albums out there today, for any individual artist to stand out, they darn near have to stand on their head and turn somersaults to get our attention. It’s sad but true, but that’s what Matt Woods does with “Deadman’s Blues.”

Written by Brandy Clark and Shane McAnally, “Songs About Trucks” is 2013’s most cunning protest song. But it’s a protest song that offers a little something more.

“Once again a member of the Texas music scene has delivered a song that gives voice and reason to how the rest of us feel. Wade Bowen’s “Trucks” aims its big, diamond-plated bumper at the incessant references to tailgates and four wheel drives in modern pop country songs and slams on the gas. At the same time, it practices what it preaches, making sure to instill some story and soul into the song along the way, instead of just being a vehicle for protest.” (read full review)

Lindi Ortega can melt your heart and make you feel the pain of a song like few others, and the beauty of “Tin Star” is the personal nature of the narrative, and how Lindi delivers it’s humble message with such loving care. She coddles this song like one would a malnourished kitten that shows up on your doorstep, or and old pair of scuffed and dusty boots found at a thrift store that she then nurses back to health and vitality, polishes and buffs up to shine to present to the world proudly.

“It’s admittedly hard to hold on to your objectivity when this raven from the Great White North rises in song and such a wave of emotion and beauty grips you that your rationality is sent reeling and all your senses are completely submerged and made submissive to her sway. Lindi Ortega is a creature of the darkness. She highlights the beauty in the world not by shining a light on it, but painting the rest black until the beauty is all that is left. She cherishes life by celebrating death. She makes you feel joy by bringing you to tears. She is the antithesis to an obvious, transparent world, all freshly fallen snow and onyx biting, contrasting, revitalizing the attention to life and its many dark beauties simply by her presence.” (read full review of the album Tin Star)

I’m nominating “Monte Carlo” here officially, but it has a companion song “Out Of These Blues” that is also on High Life and that pairs with it so perfectly, and is also written by Robison’s sister Robyn Ludwick. If someone asked me to play them an example of quintessential Texas country music, these would be the songs I would choose. Texas country masterpieces.

“Can’t say enough about these tracks, the excellence in songwriting they achieve, and Charlie’s ability to interpret their stories perfectly through song. They’re both very similar, and different all the same in the way they convey a feeling of forlornness, but still are imbibed with such a warm sense of memory that a sad story leaves you filled with a happy feeling. The way the chorus of ‘Monte Carlo’ strings you out for so long, hanging in the bubbly moments only the best music can attain, you wish this song could go on forever, and it’s so good it probably could.” (read full review of High Life)

Austin Lucas proves he’s worth the label as one of 2013’s breakout artists with this lead single from his New West debut, Stay Reckless.

“Whether electric or acoustic, Austin only knows one way to perform a song: with 100% passion, until the song’s inspiration manifests right there on stage and coats every word. Even if you hate the lyrics, or can’t connect to the story of ‘Alone In Memphis,’ it is written perfectly to pull the emotion right out of Austin every time and spill it out amongst the audience in a moment of shared reflection and commiseration on one of the most fundamental failings of the human condition our inability to feel stable without the company of another.

“Great songwriters know how to write to their strengths, and that is what Austin does in ‘Alone in Memphis.'” (read full review)

Due to a technicality in Saving Country Music’s vast and complex bylaws, even though this song was considered for Song of the Year in 2012, since it was released on an album this year, it qualifies to be considered again.

“The magic of “Life Ain’t Fair” is the way it trivializes all the issues it raises by simply pointing out the obvious: that life’s unfairness is inherent, and complaining about it or using it as an excuse to not pursue your dreams is foolish. It’s cynical and inspirational all at the same time, and that feat of acrobatics can’t be performed without some acute dexterity and prowess with the pen.” (read full review)

It’s a shame that the best songs tend to come from the deepest despair, creating the paradoxical, and sometimes self-destructive existence that many of the most talented and storied songwriters live. As JB Beverley says about “Disappear On Down The Line”:

“I was in my home, totally isolated and alone, my woman had left, I’d buried my friends, and all the proverbial voices of doubt and chaos, and all this negative stuff was fueling my mind at the time. I use the parable that the demons were dragging me down. Granted, there weren’t literally ghouls in the room tugging me through the floorboards, but as far as the emotional, spiritual, and mental direst and in some instances torment I was under, it was very real.” (read full interview)

Holly Williams “Drinkin’” from The Highway

This is one of those songs every other songwriter beats themselves up for not writing. Beautifully complex in its simplicity, both enigmatically deep and pleasantly colloquial, Holly Williams proves the Williams’ bloodline is still virile with an unconventional tune with universal impact on the weary soul yearning for respite. Where has Holly Williams been? She may have taken the roundabout way to finding herself, but she’s here now, and our ears couldn’t be happier.

“Where Holly Williams’ career and releases left her neither here nor there before, now she has found her voice, has found her place, and that place is amongst the talented women doing what they can to return the greater country music world to a place of substance.” (read full review for The Highway)

Trying to pick one song from Jason Isbell’s album Southeastern to represent on this list is like asking a rainbow its favorite color. So if you think another song is more worthy, you’re opinion is probably warranted, so just put your chips on “Elephant” in its stead.

“‘Elephant’ is just downright unfair. Though this trend of token Cancer songs dotting nearly every country album released in the past few years is alarming, Isbell’s offering is far from a saccharine and sappy vie for radio play. It is a complete deconstruction and compromising of the emotional guards protecting a listener’s heart told in shockingly-real language, allowing the chemicals of empathetic response to run pure.” (read full review of Southeastern)