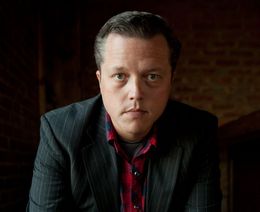 On Monday night the Twitterverse blew up around the occasion of songwriter Jason Isbell recording an upcoming episode of Austin City Limits. The taping was streamed live online, and drew a remarkable amount of attention and praise from the online participants who took the time to tune in. Usually music confined to the online format is at such a distinct disadvantage, it is barely worth your time, and though Austin City Limits’ production value is world-class, this wasn’t what made the event special. Jason Isbell is quite the capable singer, and since he started out as a guitarist for the Drive By Truckers, it’s hard to denounce his musicianship either. His band The 400 Unit was sensational as well, and so was his wife Amanda Shires who sang and played fiddle for the set. But none of this is why the event became a singular experience for those who tuned in.

It was Jason Isbell’s songs and his songwriting that made so many online watchers walk away with one of those feelings you get after watching a stellar movie—where your mind gets so immersed in the experience it is hard to return to the real world. Jason’s songs are also why the event was able to cross traditional barriers of genre and taste. Jason Isbell is on a meteoric rise right now, and even though he finished off the night’s performance with a mostly instrumental cover of The Rolling Stones’ “Can’t You Hear Me Knocking,” Isbell’s ability to evoke story is at the center of his success.

Another artist who is seeing success in 2013 is Sturgill Simpson. I once dubbed Sturgill the “Stevie Ray Vaughn of Country Music” because of his incredible guitar playing. But one of the keys to Sturgill’s rise has been his decision to set the Telecaster down and retool his music to be more about his songs.

Everywhere in the independent music world you’re seeing songwriters who have struggled for years finally starting to get signed to record labels and releasing career-caliber albums: Valerie June, Caitlin Rose, Austin Lucas, Amanda Shires, and the list goes on from there, and they are all in the middle of this emerging and relevant rise of independently-minded Nashville songwriters that more established songwriters like Jason Isbell and Justin Townes Earle are the leaders of. Whereas other sectors of the music industry seem to be gripped by the fear that digitization and streaming may ultimately doom the business of music, talented songwriters are benefiting from the search for the next writer to break out with bold and fresh material, and a renewed belief by the independent industry that songwriting is important, even if it is marginally profitable. Nobody wants to pass up the next Jason Isbell.

The biggest divide between active and passive music listeners might be the conscious awareness of songwriting. Passive listeners just subconsciously connect with a song either physically or emotionally without giving it much thought, while active listeners attempt to determine why. Popular music consistently offering less and less choice and substance is not hindering this trend, it is enhancing it as many listeners are fleeing the mainstream ranks for more thoughtful music, and in turn are becoming aware of what truly makes a song worth hearing. Even ABC’s new prime-time drama Nashville broaches the subject of how songs are written on a regular basis—many times delving into great detail on the process—making consumers more enlightened and engaged about how a song is constructed and why songwriting is important.

The Nashville show has also become a new outlet for original songs as the industry attempts to address the dramatic glut of songwriter material worthy of a wider audience. Many Nashville songwriters in this new, up-and-coming crop were featured on the series’ inaugural season, including Caitlin Rose, Lindi Ortega, and Shovels & Rope. Sales of music may be declining sharply, but royalty rates, especially for songwriters whose material appears on television and movies, remain substantial. And this songwriter resurgence is not just confined to the independent music world. Even in the mainstream, songwriters with more substantive material like Kacey Musgraves and Ashley Monroe made their big debuts in 2013. David Letterman has been featuring more songwriters on his show, including ones who’ve never had a network TV break like Ray Wylie Hubbard, Dale Watson, and Pokey LaFarge.

For every era in music, there is a defining element that sets the standard of what is tasteful and relevant. It could be the presence of a powerful guitar riff, a certain style or tone to the music, a specific thematic thread like feelings of melancholy or happiness, or even a stylistic visual element that has little to do with the music itself. In 2013, in the independent music world and beyond, that defining element appears to be the well-written song.