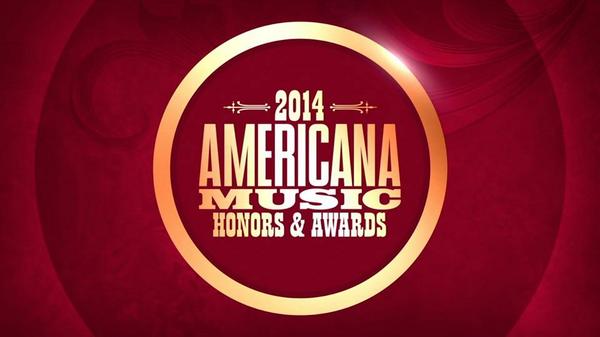 Winners of the 2014 Americana Music Awards

It will be hosted by Jim Lauderdale, and Buddy Miller will lead the house band.

Normally if you can’t be in attendance, you can’t participate in the AMA’s, but this year NPR will be streaming the event. So pull it up and follow along with us as we chronicle the night’s events and give our knee jerk reactions to winners and performances. Be ready to refresh often, and don’t be afraid to pipe up in the comments section.

Set to perform on the night are:

Winners of the 2014 Americana Music Awards

10:16: Jason Isbell is the big winner of the 2014 Americana Music Awards, but really so are all of the younger artists that the awards stepped up to honor this year, while also doing an excellent job paying tribute to past greats from a diverse swath of the Americana world. Sturgill Simpson and The Milk Carton Kids were also big winners, and this will give a boost to their growing careers. There were some great performances, but I will keep referencing back to Marty Stuart, JD Souther, Keb Mo, and their great introductions to worthy artists.

The night was beset with technical difficulties, in the presentation, the sound, and in the live stream, and unusually so from what we’ve seen from the Americana Awards in recent years. But this shouldn’t be harped on either. Overall the night did its job of shining a spotlight on artists that do not get recognition from the mainstream music industry.

10:10: Well that’s a wrap! I’m going to make one more encapsulating post and recap the winners, and then we’ll call it a night. Thanks to everyone for stopping by, and reposting and commenting, etc. etc, and sorry for the technical difficulties at the beginning of the LIVE blog. It was a night of them!

10:08: Everyone on stage for “Get Rhythm.” (sorry, pictures getting grainier and grainier) 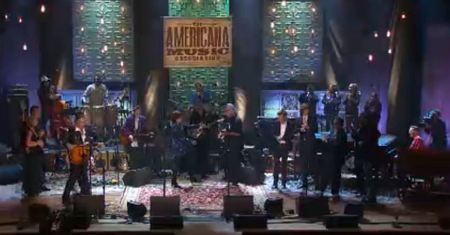 10:02: Everyone comes out on stage for a rendition of Johnny Cash’s “Get Rhythm.”

10:00: Jason Isbell: “The people in this room make the best music in Nashville. Proud to be a member of this particular family.” 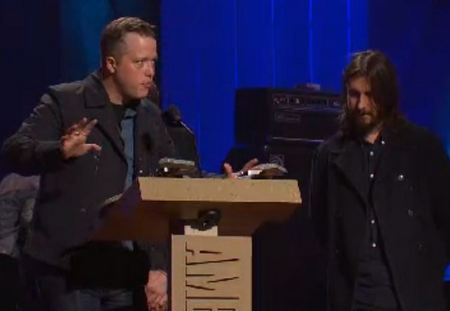 9:55: Lucinda Williams & Josh Ritter miss their fist cue to come out on stage to present the Album of the Year award … Here they come.

9:54: Great performance by Jackson Browne. This depth of songwriting is what is missing in most music today.

9:52: They give Jackson Browne a second song, and he invites his friend JD Souther to the stage to join him. 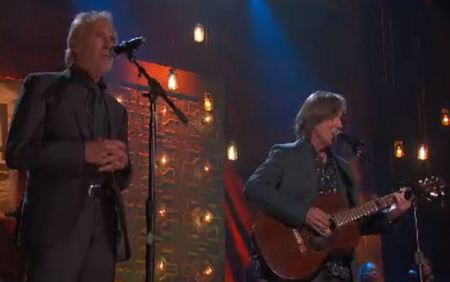 9:46: Been absolutely astounded by some of the introductions to music greats tonight. Marty Stuart and JD Souther especially. Look forward to hearing them again and getting them in print.

9:43: Jackson Browne takes time to tune before his performance—another awkward pause in the presentation. Somebody backstage did not check that? But once Jackson gets started, he does excellent as you would expect.

“It’s part of the American character to say what you believe … Commercialism has never been a friend of free speech.” 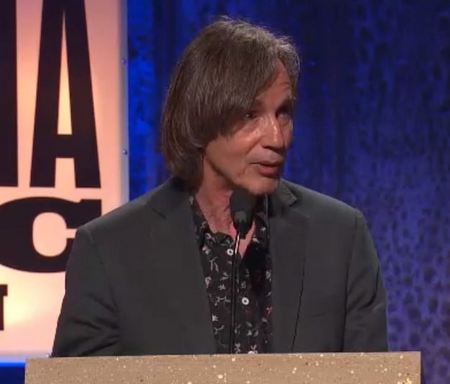 9:36: Once again the teleprompter goes out for JD Souther. This has been a chronic problem all night.

9:33: JD Souther comes out to present the “Spirit of Americana Award, Free Speech in Music” award to Jackson Browne. He tells a story about living in Echo Park in LA with Jackson, knowing Warren Zevon, and getting mugged when you have no money.

9:31: Sturgill Simpson is very humble in accepting his award. “There’s to many people I could thank, so I’ll just thank my family.” 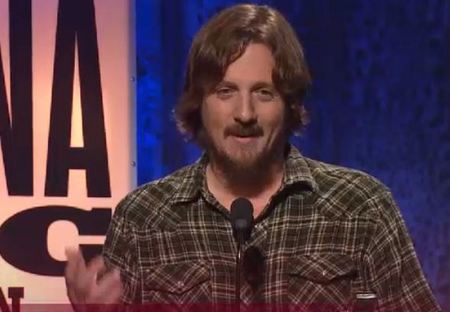 9:28: WINNER Shovels & Rope present the Emerging Artist of the Year to Sturgill Simpson.

9:22: Jason Isbell thanks his producer Dave Cobb, and his Manager Traci Thomas, who are two very important people in Americana. 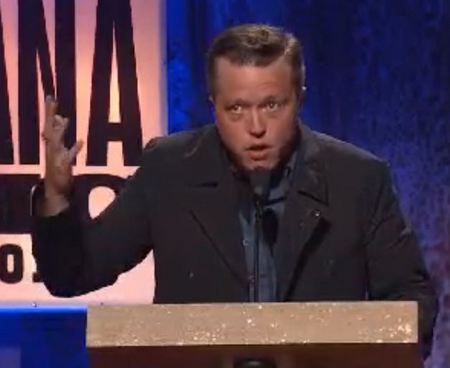 9:21: WINNER The Americana Artist of the Year goes to Jason Isbell.

9:18: Marty Stuart just gave one of the best tributes to anyone I have ever heard. It happened to be for Jimmie Rodgers. I will have to run it down in full and transcribe it in the future. “Every time a train passes, so does he. He’s a part of you, he’s a pert of me.” He gives the introduction with a lamp glowing on a stool. It was a train lamp given to Marty Stuart from Hank Snow. This presentation gave me shivers. Two guns up Marty! 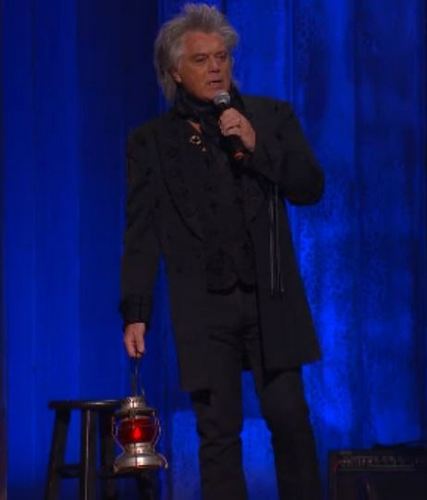 9:07: Once again, the sound causes fits on stage as Paul Thorn comes out to introduce Cassandra Wilson. He’s telling an excellent story about gospel music in white and black churches in Tupelo, MS. This presentation has been a little rough in places.

9:05: St. Paul over-gesticulating and over-singing on the Americana stage. And for the record, I still like their music. But come on. 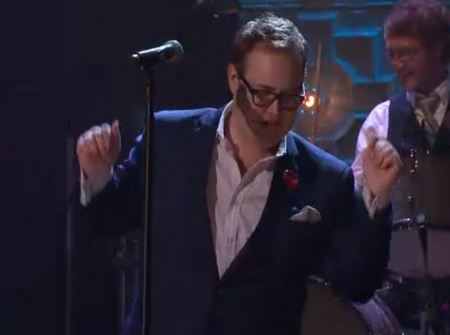 9:03: Alright, this is my opportunity to give my unfettered opinion of St. Paul & The Broken Bones: I think they are the whitest band I have ever seen, despite their skin deep “soul.” My best comparison is if that dancing guy that did nothing esle from the Mighty Mighty Bosstones got his own band. Sorry. People love them because they’re nerds, and that’s really, really cool right now.

9:00: John Paul White introduces St. Paul & The Broken Bones to the stage, who happen to be on John Paul’s record.

8:58: Emmylou Harris when presenting Vocal Duo or Group Award. “So good to be in the Ryman Auditorium. So glad they didn’t tear it down.” Emmylou was seminal in preserving it when she cut a live album at the Ryman in the mid 90’s when the venue was shuttered. 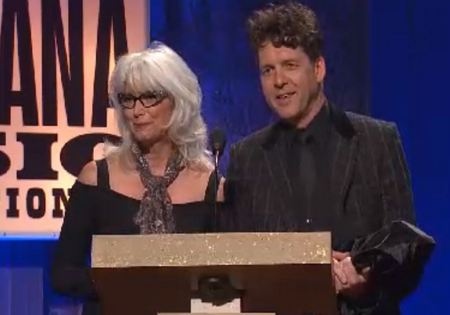 8:55: WINNER Joey Henry and Emmylou Harris present the award for Vocal Duo or Group of the Year to the Milk Carton Kids.

8:52: The Milk Carton Kids doing the world-class acoustics of the Ryman Auditorium proper justice. The ghosts are awakened. 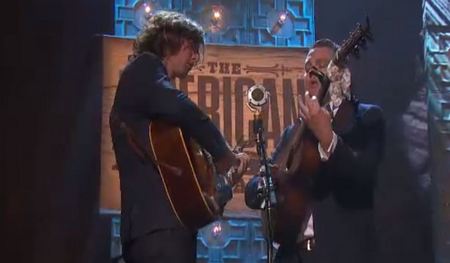 8:50: Sarah Jarosz jumps right off the stage to introduce The Milk Carton Kids.

8:47: The Milk Carton Kids do a 4-minute comedy routine to introduce Sarah Jarosz to the stage.

8:40: Jason Isbell accepting his Song of the Year award: “Happy birthday to Hank Williams, has anyone said that yet? If it wasn’t for him, we’d be doing this at a old burned out Kmart in Murfeesboro.” 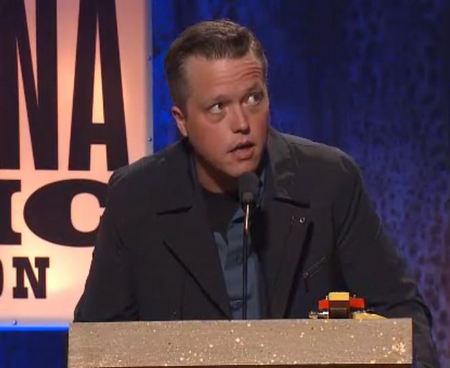 8:34: WINNER Rhett Miller and Amy Ray present the Song of the Year to “Cover Me Up” by Jason Isbell.

8:33: Beyond being an award winning songwriter, Jason Isbell is one of the most stunning performers of our generation. He killed it. 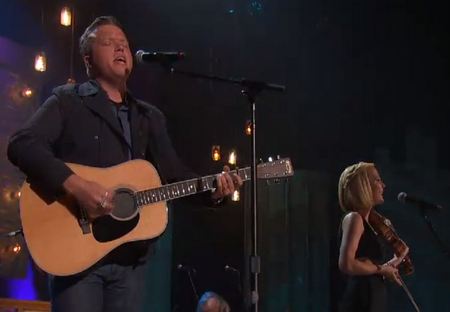 8:28: Jason Isbell, the current King of Americana Music, takes the stage to perform his Song of the Year nominated “Cover Me Up” with his wife Amanda Shires-Isbell.

8:26: Patty Griffin and Robert Plant performing “Ohio.” Was kind of a shaky performance, but it’s still cool to see the frontman of Led Zepplin paying attention to such worthy music. 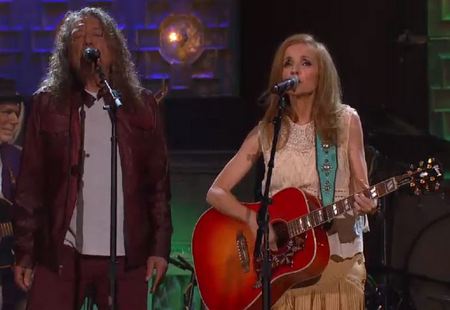 8:21: Americana couple Robert Plant and Patty Griffin take the stage. I love Robert Plant, but he’s kind of taking away from this performance with his wonky harmonies.

8:16: Sound has been inconsistent and farty all night. Just got really bad with the lead guitar during the Taj performance.

8:13: Keb Mo presenting the Lifetime Achievement Award for Performance to Taj Mahal. “He was world music before there was ever such a thing.”

Taj didn’t open his eyes during his entire acceptance speech. Because he’s cool like that.

8:09: Keb Mo comes out to present an award. “The music of my people, became the music of all people. The blues only seems simple. It’s only easy to play badly.”

8:07: Rosanne Cash performing with Buddy Miller and the Americana band. 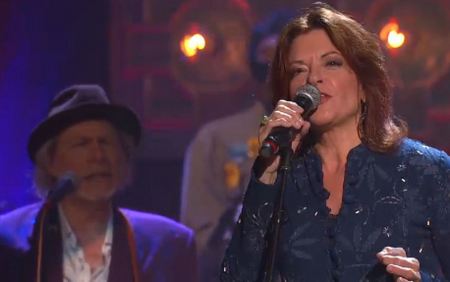 8:00: Robert Ellis playing “Only Lies” for the Americana crowd. The song is up for “Song of the Year.” 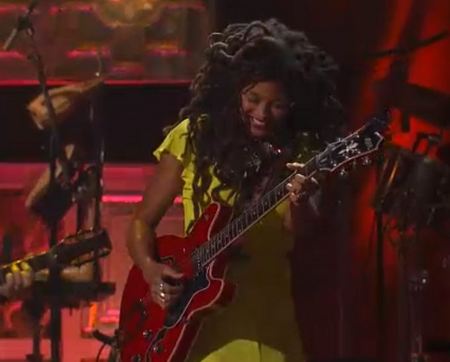 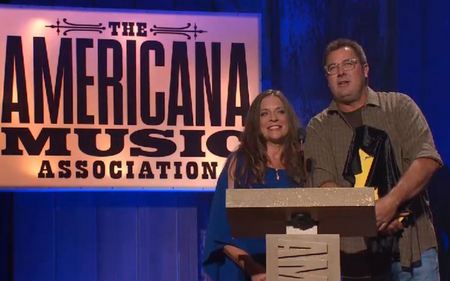 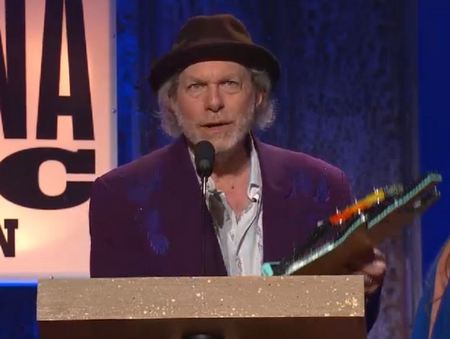 7:51: WINNER: Carlene Carter and Vince Gill show up to present Instrumentalist of the Year to Buddy Miller.

7:49: Check out the badass Nudie suit on Hurray for the Riff Raff as she sings “The Body Electric.” 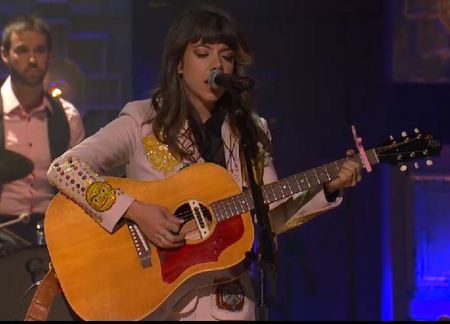 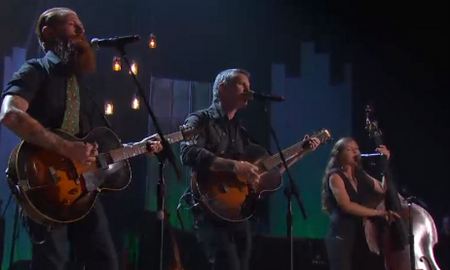 7:40: The Devil Makes Three takes the Americana Music Awards stage! I remember seeing these guys in a 50-person capacity bar a decade ago. They’ve been doing it a long time, and it’s great to see them finally recognized.

7:38: Flaco JimÃ©nez and Ry Cooder performing an 80-year-old tune together on the Ryman stage.

7:34: While we were down, Kacey Musgraves and Angaleena Presley presented Loretta Lynn with the Lifetime Achievement for Songwriting! And then Loretta Lynn performed for the Americana crowd. 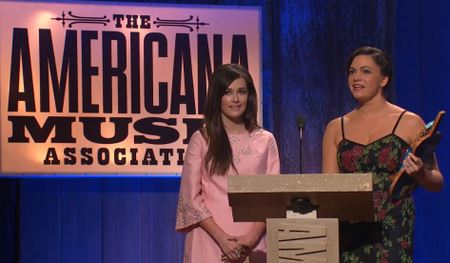 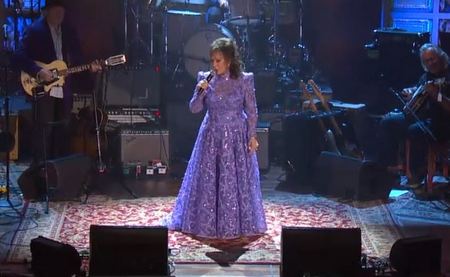 7:31: Ry Cooder is presenting the Lifetime Achievement Award as an Instrumentalist to accordion player Flaco JimÃ©nez!

7:30: Sorry folks, historic, catastrophic error with the site RIGHT as the awards were staring. We’re back up now, and hopefully have everything squared away.

6:52: Valerie June & Loretta Lynn hanging out before the awards, from The Tennessean’s Shelley Mays

6:50: Picture from Hurray For The Riff Raff of New Orleans from earlier today during practice. “Who dares me to yell ‘who dat’ if we win?” 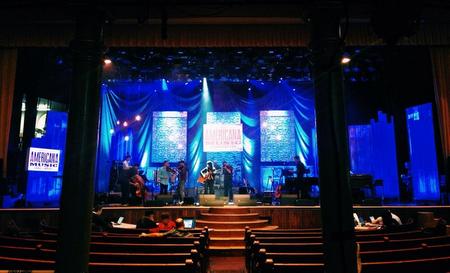 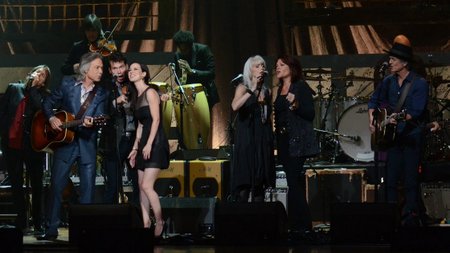 6:46: One of the cool parts about the Americana Music Awards is the house band led by Buddy Miller. Be on the lookout for Ry Cooder, John Leventhal, Don Was, and who knows else who may hop up on stage.

6:45: The Americana Music Awards hand out Lifetime Achievement distinctions each year in four different categories. This year the honorees are:

6:45: Here’s a quick rundown of the nominees if you’ve not seen them yet: