2015 Nominees for Saving Country Music’s Song of the Year 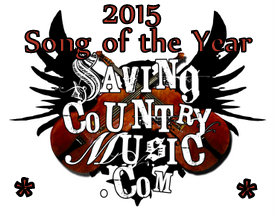 Being willing to go where a song takes you is the challenge in the heart of every music lover. Hopefully one of these songs released in 2015 will take you some place you want to be, or somewhere you’ve never been before. These songs were selected on their own merit, not from the strength of the artist or album from where they came. As the most basic expression of music, songs are arguably the most important thing to recognize in music.

PLEASE NOTE: A “Song of the Year” candidate is not always that catchy tune you can’t take off of repeat. It is a songs that can change your life, or change the world. No order to the list below was intended or should be implied. Please feel free to leave your opinions and suggestions about what the best song of 2015 is down below. Reader feedback will factor into the final selection, but this is not a simple vote tally, so tell us why you were moved by a certain song.

**READ: 2015 Nominees for Saving Country Music’s Album of the Year**

And that’s what Beverley does in “Phone Calls From My Uncle” a song he wrote specifically for Veterans Day. It’s a simple recording, just J.B. and his guitar, and Big Geo Ballentine accompanying on slide, but it really captures the incredible burdens enlisted men and women face throughout their lives, and the tolls those burdens take. The song is sparse, but Beverley fills it out by finding the heartbeat of the song, and spacing everything perfectly until you’re hanging on every word, and really feel the gravity of what is said especially when it reaches its conclusion. (read full review)

Some of the greatest songs are the ones that remind us of the most memorable times in our lives, good and bad. They encapsulate a memory, and stimulate the very shivers that we experienced when the original moment happened. “David” explores a dark moment in reflection, and though it tells a story that is very specific and personal to the narrator, it stirs up our own recollections of tragedy and loss in a way that can’t helped but be felt very personally.

“David” reminds one of Johnny Cash’s “Highway Patrolman” written by Bruce Springsteen, but that is not necessarily a bad thing.

Brennen Leigh and Sunny Sweeney – “But You Like Country Music”

You can’t get away from the political divisiveness these days, and the issue only promises to get worse as the United States Presidential election proper looms large in the not so distant future.

But that’s what’s so great about music. It’s a world away from the rancor of political discord (Steve Earle and Toby Keith notwithstanding). It’s something that can help you take the edge off of whatever has your head tied up in knots, and bring people of differing viewpoints and backgrounds together. Or as Brennen Leigh and Sunny Sweeney say, “A love of country music conquers all.” (read full review)

There comes a time in every songwriter’s career where the fire begins to subside from the belly, and they fail to find the same potency of words that marked their once high-flying careers. It’s an inevitable reality of life for all of us that the skills and talents that once used to be so readily available at out fingertips will begin to fade away. That day looms large in the future for every soul, but for one songwriter, his ability to stave of complacency and a cessation of his skills has been remarkable. Maybe because his career was never marked by the sweet taste of mainstream success. Maybe it’s the mark of good genes. But Ray Wylie Hubbard keeps delivering songs most 20-somethings wish they could compose, and along with the impact of the songs themselves, the effortlessness of Hubbard’s delivery seems almost ethereal. (read full review)

“Geography, and the artifacts that clutter up the lives of low living characters are so cunning in how they’re conveyed by McMurtry. The breadth of knowledge McMurtry brings to his subjects never fails to impress, especially in a song like ‘Carlisle’s Haul’ about fishing commercially out-of-season to help solve a neighbor’s financial woes, showing James’s propensity to use character to illustrate both sides of a political issue, and speaking to the root causes which are more common to all than they may appear on the surface.”

Dawes – “All Your Favorite Bands”

This indie rock band from L.A. is not who many would consider proprietors of music that would fall under the country music umbrella, but as friends and confidants of many of the artists from the independent country and Americana world, they’re honorary country music close cousins. No matter your musical stripes, all audiofiles can unite behind the idea of wanting your favorite bands and artists to continue to make the music that has grown to become so meaningful in your life. What takes the title track from Dawes 2015 record to the next level is how they integrate every music fan’s wish into a gesture to another.

“Then Justin Townes Earle hits you with ‘Day and Night,’ maybe his magnum songwriting opus, or at least it should be considered in that company from his body of work. The less Justin Townes Earle does in a song, the better the music gets. Sure you have to have some songs help cleanse the palette with a full band experience, and set the contrast for the quieter moments. But alone or with a lone accompaniment is where he positively shines.”

from High on Tulsa Heat

“For those tragic songphiles who were done with popular music by late adolescence, started rummaging through their parents’ record collections and taking suggestions from older siblings and cousins about what was cool, and seem to be engaged in a lifelong pursuit of the essence of the listening experience this is the manna, this is the potent stuff that still makes you feel like a listening virgin when you’ve built up such an insatiable tolerance and addiction over the years so that only the purest stuff will puncture you with its raw emotion.”

Many songs could have been picked from the choir that is Moreland’s excellent songwriting effort High on Tulsa Heat, but the imagery of “American Flags in Black & White” is what sets this entry apart.

Evan Felker of the Turnpike Troubadours may not be the greatest songwriter of our time, but he is the greatest songwriter of our time at writing a story built around a breakup. The entire Turnpike Troubadours franchise has grown out of such songs. “7 & 7” from Diamonds and Gasoline,  “Good Lord Lorrie” and “Gone Gone Gone” from Goodbye Normal Street, and now “The Bird Hunters” from their self-titled release all fit this model. Such boldness to put a 5-minute waltz-timed song as the very first track, but it’s the song that sucks you in the most.

Love & Theft – ‘Whiskey On My Breath”