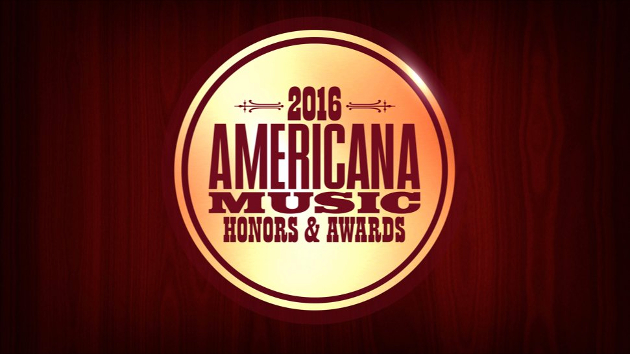 Welcome ladies and gentlemen to Saving Country Music’s 2016 Americana Music Awards LIVE blog! As the festivities stream live from the Ryman Auditorium in Nashville (link below), we’ll tag along to leave our observations, keep up with the winners, discuss the performances, and share what happened for those folks who missed it. You can’t be here, but hopefully this is the next best thing. So get your refresh fingers ready, and feel free to share your thoughts below in the comments section.

Watch the Awards on SCM Live

Artist of the Year: Chris Stapleton

Song of the Year: “24 Frames” by Jason Isbell

Album of the Year: Jason Isbell’s Something More Than Free

Instrumentalist of the Year: Sara Watkins

10:00 – My general observation of this year’s awards is they probably had the most star power of any Americana Awards, and the presentation was smooth and enjoyable. Interesting to see Chris Stapleton walking away with an award after he’s swept the industry awards, but he still showed up and was a complete gentleman accepting it. Once again it’s a big Americana night for Jason Isbell as he continues to be the current “King of Americana.” It was also a huge night for Jim Lauderdale, and only fitting this capped the night off.

9:54 – Well that’s it folks, thanks for following along! I’m going to compose some final thoughts, run down the winners, and call it a night. THANK YOU for following along, liking, commenting, reposting, or just reading. Alson make sure to check out my pictures from the rehearsals.

9:51 – Billy Bragg and Timothy B. Schmit also on stage, and the McCrary Sister take a stanza. Jason Isbell hangs out backsgae just in case they all die and Americana music needs to be repopulated.

9:48 – Lucinda Williams, Parker Millsap, Milk Carton Kids, others comes out to join in to “Will The Circle Be Unbroken.”

9:46 – The Nitty Gritty Dirt Band take the stage to honor the 50th Anniversary of “Will The Circle Be Unbroken.” Also see Margo Price, Steve Earle, Bonnie Raitt, and others ambling out.

9:43 – Tell me Jim Lauderdale isn’t a man full of happiness and love in this moment. 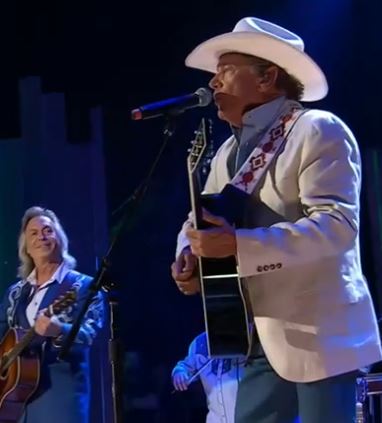 9:38 – Jim Lauderdale on George Strait : “You were my benefactor. You were the reason I could make a living.”

9:35 – Jim Lauderdale gets emotional accepting an award. What a big honor to receive it with George Strait standing on the stage with him.

9:32 – George Strait gives a big handshake of legitimacy to Americana. 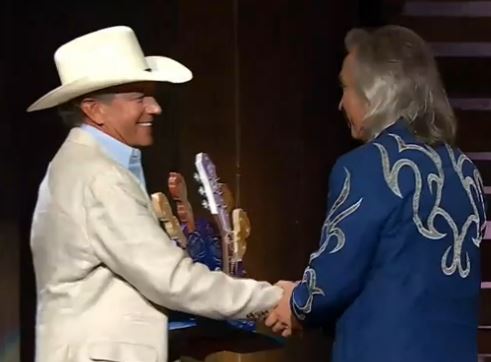 9:30 – George Strait is presenting the WagonMaster Award to Jim Lauderdale. The award has only been given out twice. Of course, Strait has recorded multiple Lauderdale songs over the years. And we get to hear King George Strait say “String Cheese Incident” (with a laugh of course) when naming off the scores of other performers Jim Lauderdale has written for.

9:27 – Isbell compares Americana to the opposite of a bucket of crabs. Then the crowd goes crazy as they realize that King George Strait himself just took the stage.

9:25 – Another Standing O for Isbell. Told you we’d be seeing a lot of him tonight.

9:24 – The 2016 Americana Album of the Year is Jason Isbell’s “Something More Than Free” produced by Dave Cobb!

9:22 – John Prine comes out to a standing ovation. He’s handing out the Album of the Year. “I can’t read shit,” Prine says as the crowd laughs.

9:21 – A faceless Chris Stapleton, and Gunnar soaking up some Americana face time. 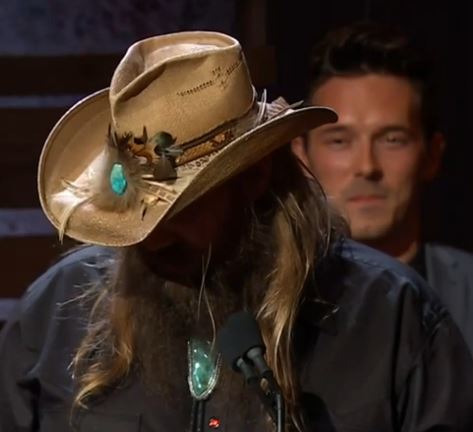 9:19 – Wow, and Chris Stapleton is in the house. There was some question if he would be. The dude wins everything.

9:17 – So Gunnar from the “Nashville” show (don’t know his real name) comes out with Wynonna, saying “This is Wynona Ryder, right?”

9:12 – Some of the latest Lucinda Williams albums have been a little hard to get into for me, but this song “Dust” is haunting. The line “Even your thoughts are dust” is just so damn depressing, and Lucinda knows how to deliver it like none other.

9:10 – Jim Lauderdale, the captain of the ship. He introduces Lucinda Williams. 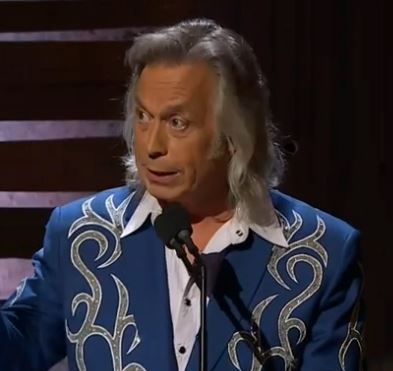 9:08 – Heh, Buddy figures out Dave Cobb was overlooked and gives him a shout out. Of course Cobb has quite a few Americana Awards under his belt as a producer.

9:00 – Catching up, that was Aoife O’Donovan and Sarah Jarosz singing backup for Parker Millsap.

8:57 – John Leventhal introduces William Bell ahead of his Lifetime Achievement Award for Song.

8:54– …and yes, after Bob Weir accepted his award, he totally randomly looked around the stage like someone had been performing in The Grateful Dead his entire life.

8:53– Randomly, the presentation has been super smooth and slick this year. Last year there were some hiccups, but they got all the wrinkles ironed out this year. Good show and a great lineup. 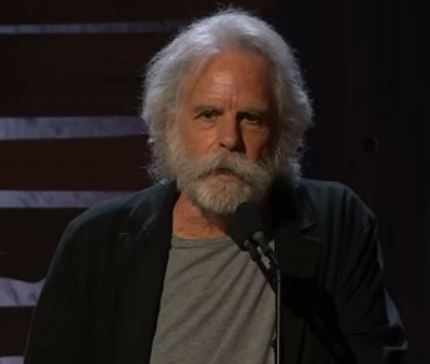 8:43 – Jack Ingram introducing Bruce Hornsby. “I’m never prepared for the weight of this room.” By the way, Ingram’s latest album is great, and going too far under the radar.

8:41 – Jason Isbell thanks Amanda Shires. “She was standing next to me but George Strait came by and I lost her.” 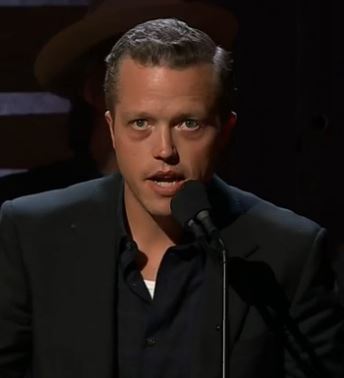 8:37 – Timothy B. Schmit and Jack Ingram comes out to present the Song of the Year. I think Jack Ingram is drunk, partially because I saw him take multiple shots on the red carpet.

8:35 – I know a lot of folks see The Lumineers as “Ho Hey!” hipster frap, but I think this “Angela” song is exquisite, and the perform the hell out of it. Everybody in the Ryman is clapping along. Everyone. Infectious without sacrificing emotion.

8:33– Jed Hilly touts that Billboard now has an Americana chart, and then introduces The Lumineers who topped it while topping the all-genre Billboard 200 at the same time.

Jed Hilly compares the awards and the fest to a barn raising. “I can’t count the people who have contributed to put this together.” 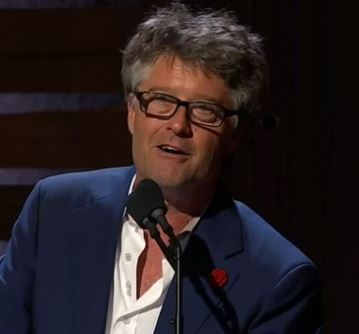 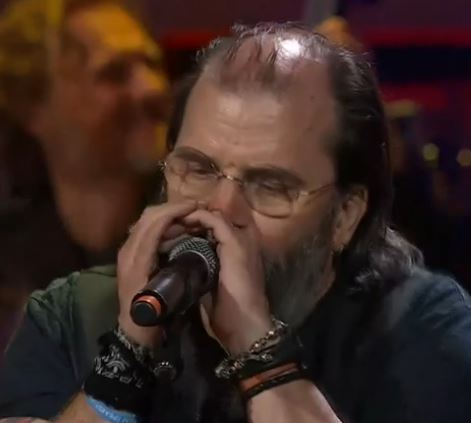 8:25 – Steve Earle and Buddy Miller come out to perform “I Let The Freight Train Carry Me On.”

8:19 – Holly Williams comes out to present the Emerging Artist of the Year award.

8:15 – Hard country comes to the Americana stage in the form of Margo Price singing, “Tennessee Song.” When I first saw her on the red carpet, I swear I thought she was Lee Ann Womack. 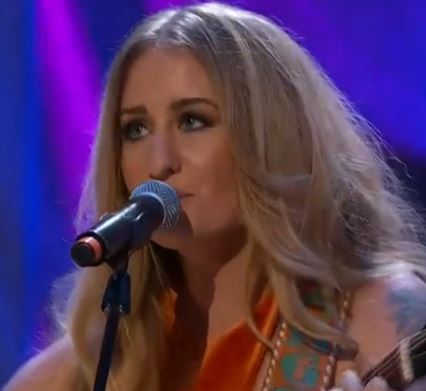 8:12 – John Moreland. “Standard Deluxe” on his hat. A poignant oxymoron? 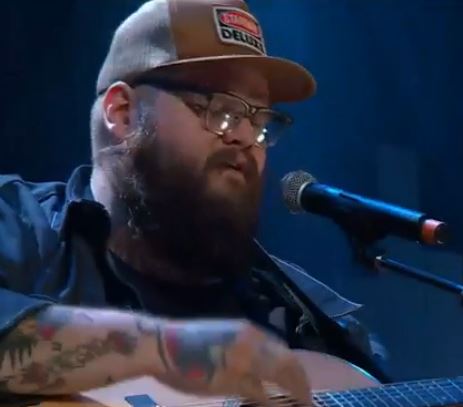 8:09 – John Moreland performs “American Flags in Black & White” backed by Buddy Miller and a stripped-down version of the house band. Good harmonies from Buddy Miller. I normally don’t like Moreland with accompanyment, but this is great.

8:04 – Billy Bragg takes the stage to sing the Woody Guthrie song “I Ain’t Got No Home.”

8:02 – Lucinda Williams reads a quote from Woody Guithrie. It’s this famous (and great) one:

I hate a song that makes you think you are not any good. I hate a song that makes you think that you are just born to lose. Bound to lose. No good to nobody.No good for nothing. Because you are too old or too young or too fat or too slim. Too ugly or too this or too that. Songs that run you down or poke fun at you on account of your bad luck or hard traveling. I’m out to fight those songs to my very last breath of air and my last drop of blood. I am out to sing songs that will prove to you that this is your world and that if it has hit you pretty hard and knocked you for a dozen loops, no matter what color, what size you are, how you are built, I am out to sing the songs that make you take pride in yourself and in your work. And the songs that I sing are made up for the most part by all sorts of folks just about like you.

8:00 – Lucinda Williams comes out to accept the Americana President’s Award for Woody Guthrie.

7:58 – Billy Bragg then draws a convincing line between the punk songwriters of the 80’s and Woody Guthrie, who the is the recipient of the next award.

7:55 – Billy Bragg thanks Joe Henry for the “eulogy.” And then gives America hell for letting British boy Tom Hiddleston “stand on this very stage and impersonate Hank Williams.”

For the record, not sure if Hiddleston ever did his impersonation at the Ryman.

7:48 – Jason Isbell. Something tells me this isn’t the last time we’ll see him tonight. He might be at the awards show podium after not too long. 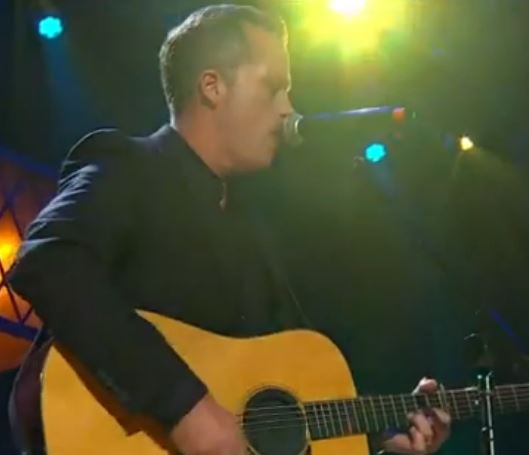 7:47 – Jason Isbell is one of the few allowed to play with his own band, which includes Amanda Shires who had her van burgled a couple of days ago in Chi-town. Keep an eye out for a missing thesis. I’m sure it’s worth a load at a pawn shop.

7:45 – Jim Lauderdale introduces Jason Isbell. Oh, and awesome, he’s singing “If It Takes a Lifetime,” my favorite song from his last album, and arguably the most country of his Americana career.

7:40 – The Indigo Girls come out to present the duo/group of the Year award. 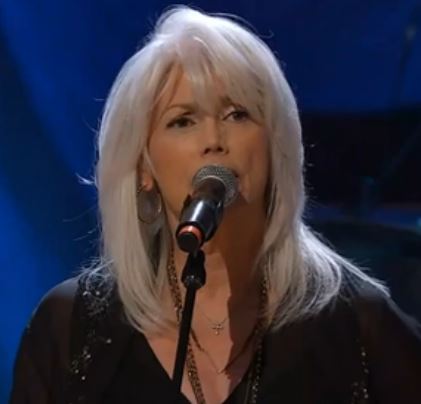 7:38 – The great Emmylou Harris and Rodney Crowell take the stage to perform “Bring It On HOme to Memphis.” A lot of Memphis blues in the presentation so far.

7:34 – Jim Lauderdale is explaining the rules of the awards, and playing promoter for the Americana Music Association. Asking people to join, he says in a sarcastic tone, “What have you got to lose?”

7:31 – The Milk Carton Kids. BTW, wanted to post pictures of Dwight, but his publicist was cracking a whip over everybody about no photography anywhere. 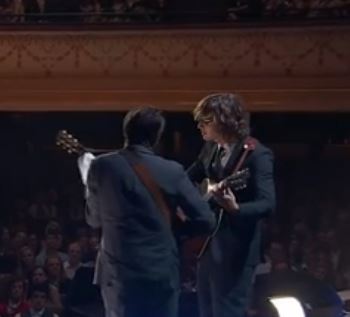 7:25 – Joe Henry comes out and awkwardly vamps for four minutes to introduce The Milk Carton Kids.

7:22– It might be bluegrass, but Dwight’s still wearing the signature skinny jeans and has the lower waist wiggle going on.

7:20 – Sam Outlaw comes out to introduce surprise performer Dwight Yoakam. Dwight’s playing a bluegrass version of his song “What I Don’t Know” off his new album out Friday.

7:19 – Sara Watkins is not on the premises, so her brother and performers Sean Watkins comes out to accept the award. He says he’ll text her and let her know about it.

7:18 – The 2016 Americana Instrumentalist of the Year is Sara Watkins!

7:13 – Bonnie Raitt singing to the rafters of the Ryman. 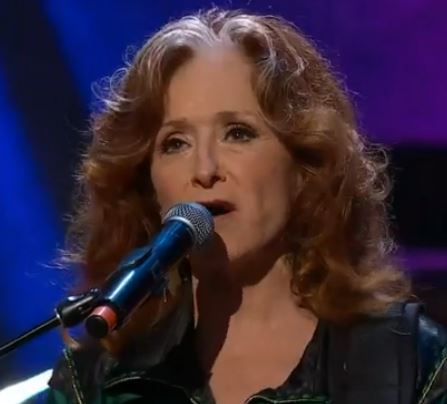 Wow, this performance is LOUD. But who’s gonna tell Bonnie Raitt to turn down?

7:05 – Shawn Colvin takes the stage. For years I only knew her as the woman who sang the 90’s earworm “Sunny Came Home,” but her body of work is much deeper, and she’s clearly well-respected by her musical peers.

7:03 – Shawn Colvin accepting her Trailblazer Award. She said it was an honor to receive it from another trailblazer, Bonnie Raitt. 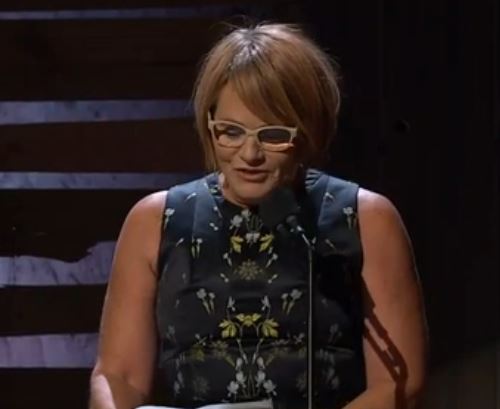 6:59 – Bonnie Raitt walks out on stage in green, and the crowd goes crazy. She calls Americana a collection of feet that “don’t fit quite right into shoes off the shelf.”

6:56 – Nathaniel Rateliff and the Night Sweats are wearing “International Dickweed” jean jackets. So there’s that.

6:54 – Jim Lauderdale takes the podium to say that the previous musical tributes were a symbolic torch passing, making sure that the circle remains unbroken. Nathaniel Rateliff and the Night Sweats take the stage. 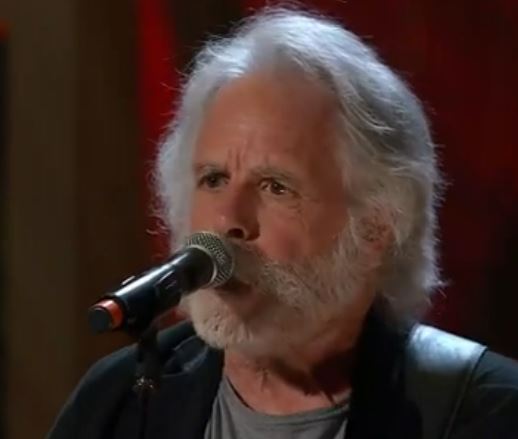 6:48 – The Grateful Dead’s Bob Weir takes the stage singing Merle Haggard’s “Mama Tried.” As Deadheads can attest, they covered the song on the live “Steal Your Face” album, maybe 1972. The Grateful Dead, just like Gram Parson were HUGE in making country music cool on the West Coast. Cool to seem him perform this. 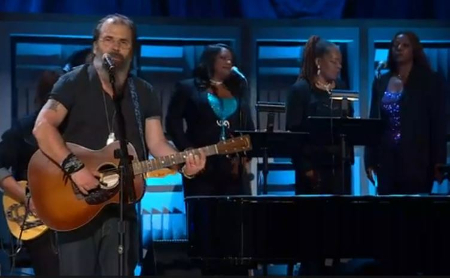 6:43 – Steve Earle singing Guy Clark’s “Desperadoes Waiting For A Train”. These first few performances have been for artists that have died in the last year.

6:40 – This is Joe Henry singing “Freedom For The Stallion”

6:37 – The show opens with Alison Krauss, Buddy Miller, and others singing a hymnal a capella. The Ryman falls to a complete hush. The song is “Gloryland.”

6:25 Some Pictures from the Red Carpet: 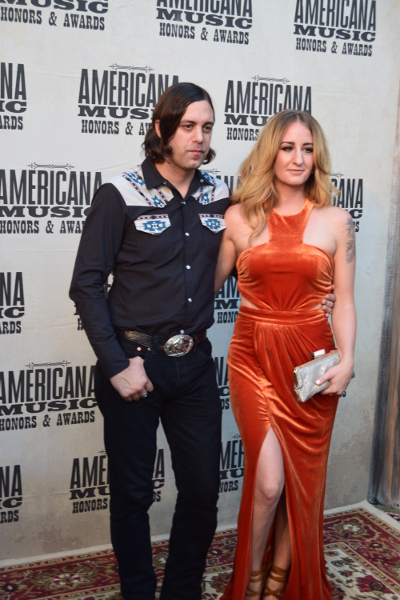 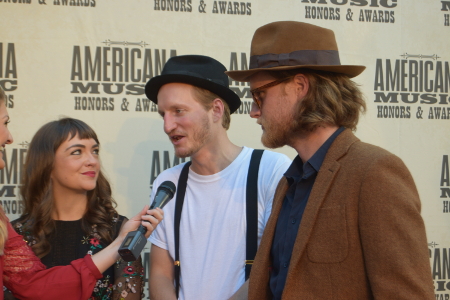 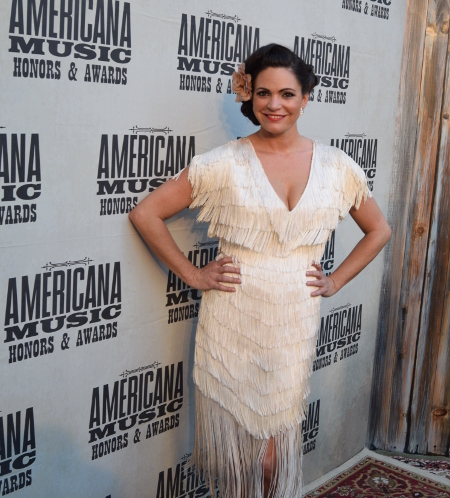 Jason Isbell and Amanda Shires, for some reason holding a stencil of Margo Price. 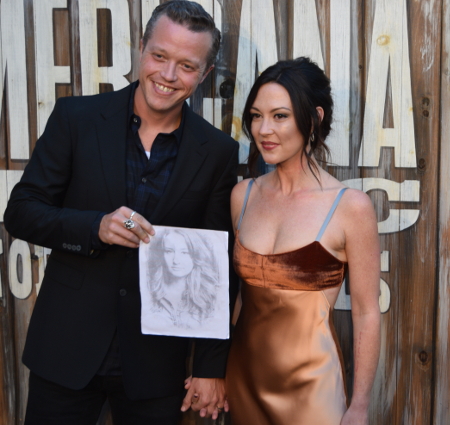 Amanda Shires showing off her back ink. 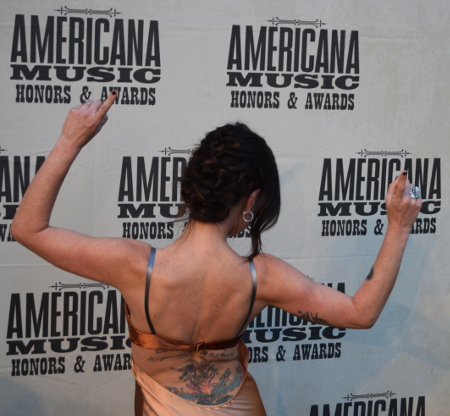 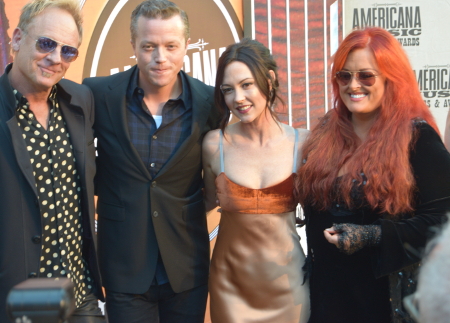