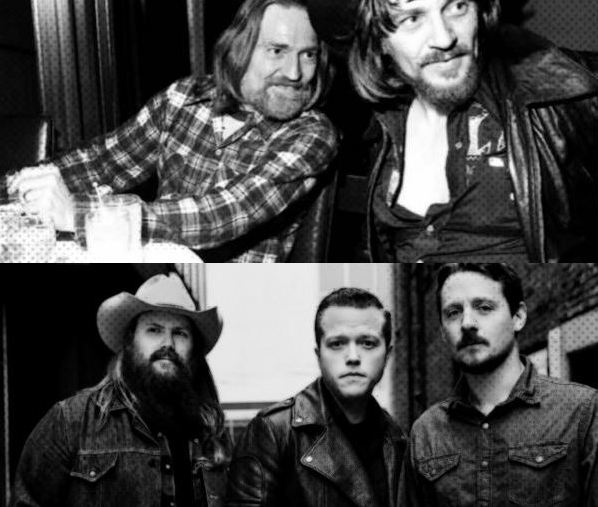 The country music Outlaw movement didn’t happen overnight either. It took years and years of gnawing away at the obtrusive oligarchy that had set up shop on Music Row to get to the point where many of the genre’s most prominent stars could call their own shots, and the music could finally open up to new ideas and fresh faces. Before Willie and Waylon were the biggest thing country music had ever seen, Bobby Bare had worked behind the scenes to gain control of his own music, and pave the way for bigger names. Kris Kristofferson reset the stuffy mindset of what a hit song and a hit songwriter could be. Tompall Glaser and his renegade Hillbilly Central studios took the power of recording music out of the hands of the few and put it back into the hands of the artists. And Waylon Jennings took the songs of an unknown songwriter named Billy Joe Shaver and recorded an entire album of them.

And then 1975 came around, and all of that hard work, all of the perseverance from many folks concerned about country music and what it had become under the Countrypolitan regime began to break through. 1975 was the year of Willie Nelson’s Red Headed Stranger. It was the year of Waylon’s #1 song “Are You Sure Hank Done It This Way.” It was the year Jessi Colter had a #1 with “I’m Not Lisa,” and Merle Haggard racked up four #1 singles himself. And then Waylon Jennings shocked everyone by walking away with the CMA award for Male Vocalist of the Year, and the entire country music industry was stood on its head. Does that sound familiar at all?

The task has seemed so insurmountable, and the progress has been so slow, and since certain objectives still remain unfulfilled, many of us have failed to notice that country music is being saved right below our very noses. And even more exciting, this upcoming year holds a tremendous amount of opportunities for further progress.

Where once it was Willie, Waylon, Tompall, and Colter, now it’s Sturgill, Stapleton, Isbell, Dave Cobb, perhaps Brandy Clark and Holly Williams, and half a dozen other noteworthy artists receiving incredible traction, and all making measurable headway into the way things are on Music Row, and opening up the music like never before. That doesn’t mean this new generation is comparable to the older one in historical stature, or even talent. That’s for time to decide. But what is for certain is that folks that have control of their own music are on a dramatic rise, while the establishment, though still certainly dug in, feels a step behind, outmoded, and almost silly-looking when they take the stage and pretend the appeal for beer and truck songs will hold out forever.

Revolution isn’t pretty, and it’s rarely heralded in with complete and total victory. In 1975, the “Nashville Sound” was still very much alive, and there were still holdouts hoping that the old ways of producers like Chet Atkins and Billy Sherrill picking songs for artists, and telling stuffy salaried studio musicians exactly what to play would last for years to come. The existence of the old guard in country music was never totally eradicated. In fact it would hold on to just enough power to rear its ugly head to prominence a mere half decade later. Part of the Outlaw legacy is that they never finished the job. Willie left for Texas, Tompall and Waylon had a falling out, and Tompall closed up shop. Remember, 1975 was the year John Denver won the CMA for Entertainer of the Year as well. Rome wasn’t built in a day.

But what we have in 2016 is that same sense of optimism in the air that was swirling around in 1975. In the first week of the year, Chris Stapleton once again has the #1 record in all of country music, as he has virtually every week since he virtually swept the CMA Awards in early November. And there’s no signs of stopping him, with a high-profile appearance on Saturday Night Live up ahead, and a Grammy Awards night upcoming that could be even bigger than the CMA Awards.

2016 will likely see the release of a new record from Sturgill Simpson. There’s the possibility that Isbell and Stapleton could join him later in the year with new releases. Brandy Clark and Holly Williams have new albums coming. Producer Dave Cobb’s concept album Southern Family could become a rough equivalent to Wanted: The Outlaws—officially released in January of 1976, but still very much a result of the 1975 revolution. Wanted: The Outlaws went on to be country music’s first ever platinum-certified album. The way Southern Family looks to bridge popular artists like Miranda Lambert and Zac Brown, with artists like Jason Isbell and Holly Williams, could integrate and elevate independent music like never before. But remember, artists like Sturgill Simpson and Brandy Clark are now major label artists, as is Chris Stapleton, and the stakes have been elevated like never before. Dave Cobb is the epicenter of this whole thing, just like Tompall’s Hillbilly Central was the Outlaw revolution’s ground zero in the 70’s.

If anything is holding the new wave of momentum back, it’s a very small, but very strident and vocal minority of fans who are untrusting of anything successful, or anything having to do with the country industry proper, and are unwilling to throw their weight behind Stapleton and others. It’s true that the success of Sturgill Simpson and Chris Stapleton will undoubtedly breed copycatters and interlopers, but is this necessarily a bad thing? Meanwhile, Music Row is not standing flat footed, but have been retooling with a new crop of young traditionally-minded talent that look to release their own wave of new music in 2016—folks like Mo Pitney, William Michael Morgan, and Jon Pardi. One of the differences between 1975 and 2016 might be the breadth of how dramatic the changes might be, affecting most every sector of country music. Chris Stapleton has already proved the new wave can dominate the awards shows, which once were though to be completely off limits to music of substance.

If there’s any hold out to the old ways of doing business, it’s radio. But just like Bro-Country, in 2016, radio feels like a bloated and antiquated oligarchical institution with a crumbling foundation ready to fall at any moment. iHeartMedia and Cumulus are up to their eyeballs in debt, and seem to be delusional about their prospects, especially with their plans of salvaging their business models on the back of commercial country. Radio still matters no doubt, but at this point it’s become niche programming for rabid super-consumers who don’t know what to do, what to buy, or what to listen to without someone telling them. Let the Florida Georgia Line’s and Luke Bryan’s run to the safe haven of corporate radio right before it implodes, which at this point is inevitable. The only question left is, when? Possibly more than anything else that Jason Isbell, Sturgill Simpson, and Chris Stapleton have accomplished, they’ve proven you don’t need radio for success.

Sorry to inform you though, but pop country isn’t going anywhere. As much as we may want to shake our tiny fists at him, Sam Hunt has touched a nerve, just like Chris Stapleton and Sturgill Simpson did. Pop has always been a part of country from the very beginning. But what 2016 has the chance to usher in is a new era of balance, where all artists living under the big tent of “country” music are allowed to thrive; where Chris Stapleton can compete with Sam Hunt for New Artist of the Year, and actually win because he’s the better nominee, and is actually country. Where if a towering legend of the genre like George Strait is taking his final bow, he’ll be bestowed with Entertainer of the Year.

And perhaps something that can be different in 2016 is we can make sure to learn from the mistakes of the past, and make sure to set substantive country music on the path of sustainability, where it’s always part of the mainstream landscape instead of see-sawing back and forth every 25 to 35 years in unnecessary conflicts where insults fly and we have to declare a culture war on our fellow country music fans. The idea that artists should be able to record their own songs, use their own players, and that the best, not just the most commercially-successful music should be championed and honored should not be a foreign concept we have to fight for, but something that is embraced by everyone in the industry for a more sustainable future immune from trend crashes and free of constant infighting.

It shouldn’t be about if you’re mainstream or independent, traditional or contemporary, or played on the radio. It should be about the quality of the music. And now that the independent labels of country like Thirty Tigers, Sugar Hill, and others are continuing to find more and more market share, they deserve seats at the table that was once only earmarked for the select few of Music Row’s major labels.

It’s not going to be speedy, it’s not going to be pretty, and it will never be absolute. And even if a grand level of success is achieved, vigilance for years to come will still be necessary to make sure the historical precedence of immediately backsliding after successes doesn’t repeat itself. But country music can be saved, and is being saved, and will be saved with a lot of effort, a little bit of luck, some realistic pragmatism among core fans, and a dash of positivity about the outlook for the future.