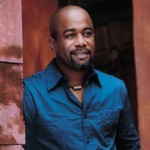 On Tuesday night (10-2-12) Brad Paisley popped out of the crowd at the Grand Ole Opry and surprised everyone by presenting former Hootie & The Blowfish frontman turned pop country star Darius Rucker with an invitation to become the Grand Ole Opry’s newest member. The invitation came a week after Gaylord Entertainment’s $210 million sale to Marriott International was approved by shareholders.

As a frame of reference, you can cull through the vast Saving Country Music archives, and aside from maybe a passing comment, you will find no ill will towards Hootie around here, no negative reviews or features of any sort. No matter what you think of the man, he’s generally kept his nose clean over the years, understanding that he is privileged to be amongst the mainstream country ranks, and no, not because of his race.

The problem with this invitation is that he is a country interloper, a carpetbagger who came to the genre like so many others to save a dying pop rock career. And we don’t even know how long he will stay. He said in late July that Hootie & The Blowfish are reuniting and recording new music. But here we are, handing Hootie country’s most coveted invitation with a lifetime guarantee when there’s so many other artists out there so much more deserving.

And the invitation is so obvious. It’s a headline maker. How about showing the man some respect by letting him earn the invitation, as opposed to using him as a prop for a publicity blitz? It is good that the Opry finally has another black member, but not that it is being done this way.

And after sleeping on this list, 6 other names that probably deserve to be on it somewhere:

And just in case you were wondering where Hootie would be on my list? Well, you have to fast-forward pretty far…

724. Limahl – The guy that sang the theme song to The NeverEnding Story. This dude:

I tried to be practical when making my list, but if all things were equal (and taking into consideration the Opry’s family friendly environment), here are some names from the underground/independent country world that would deserve an Opry nod:

Who would you like to see in the Grand Ole Opry?