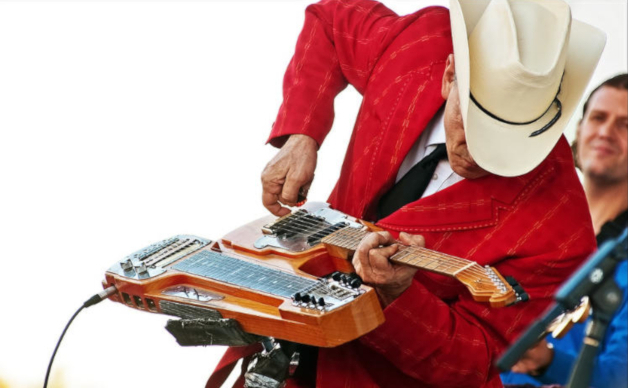 The reward is now up to $3,000 for the return of the legendary “Big Red” guit-steel guitar owned by country music performer Junior Brown. Burglarized from a vehicle parked at a hotel in North Attleboro, Massachusetts near Providence, Rhode Island on Sunday, October 6th, the legendary instrument that combines an electric guitar with a full-sized lap steel has been the signature of Junior Brown for nearly 35 years, and is one of the most iconic instruments in country music history.

A few days after the guitar was taken, Junior Brown offered a reward of $2,000 for the return of the legendary instrument. Earlier this week, a veterinarian named Trey Armstrong and his wife from Monahans, TX offered up an additional $1,000 for the return of “Big Red,” and the Martin-brand Shenandoah acoustic guitar owned by Junior’s wife, Tanya Rae Brown, that was also stolen in the incident.

“We usually bring [the guitars] into the hotels, and we’ve been a little careless lately, and that’s what happens when you’re careless,” Junior told Saving Country Music on Monday, October 7th. “They broke a window and got into our rental vehicle, took my guit-steel and Tanya’s guitar … It’s like a special old friend, done a lot of shows with it. I just hope the guy doesn’t jet spooked since it’s so hot, and toss it in the river or something. That is what I’m concerned about.”

In the meantime Junior Brown has been playing the guit-steel known as “Old Yeller” that had been on display in an Atlanta museum. Given to Junior Brown’s booking agent Bobby Cudd as a gift many years ago, it was the only other non replica guit-steel to be had at the moment. The museum shipped the guitar to Houston to be reunited with Junior Brown where he played his first show after the theft at the Mucky Duck on October 10th. Meanwhile the original builder of the guit-steel, Michael Stevens, is working on a replacement guitar for “Big Red” while the search continues.

“He’s got another one on the shelf that he may be able to fix up for me, put a paint job on it and some electronics,” says Junior Brown. “But of course like any instrument that you’ve been with for a long time, it has a lot of sentimental value.”

The unique sound Junior Brown was able to achieve with the guit-steel made him a cult legend around his 1993 record Guit With It released on Curb Records. Songs like “Highway Patrol” written by Red Simpson, and “My Wife Thinks You’re Dead” have since become classic country standards. Junior Brown is a regular on the country music club circuit, and is revered as both a player and a singer for his signature deep voice.

Junior Brown’s “Big Red” guit steel is as important a piece of country music history, and it’s loss would be shared by the entire country music community. Anyone who has information about the guitar is asked to contact the North Attleboro Police Department at (508) 695-1212.