.357 String Band is Breaking Up

Milwaukee, Wisconsin’s .357 String Band, one of the stalwarts and one of the first full-time bands in the underground country movement, has decided to call it quits. Their high-octane “streetgrass” approach to traditional bluegrass music made them one of the top-tier live and recorded acts in all of underground country, and afforded them a big following in Europe as well. Their album Fire & Hail was the Saving Country Music Album of the Year in 2008, and the band is where underground country All-Star Jayke Orvis got his start. 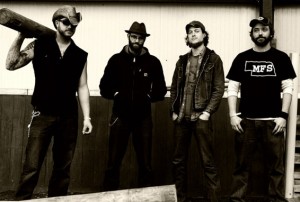 According to the announcement from the band’s Facebook page, the decision was made when songwriter and banjo/fiddle player Joe Huber, who released a solo album last year Bury Me Where I Fall, decided to leave the band.

Keep an eye out for solo projects/tours/etc, and we may occasionally make an announcement or two on here. Thank you all so much for the support over the years, it has meant the world to me. I hope to see you all at one or both of the shows next weekend, so we can celebrate 7 years of Streetgrass, whatever the hell that means…..

Word is guitarist, songwriter, and front man Derek Dunn has a solo album in the works, and is planning a tour to Florida and back this Winter. Stay tuned to Saving Country Music for any further developments.

The band went through some high profile drama in June of 2009, when they let go mandolin player Jayke Orvis. Jayke went on to make the first record on the Farmageddon Records label It’s All Been Said, and join the band The Goddamn Gallows. He was replaced by Billy Cook. The .357 String Band has also toured as the backup band to Bob Wayne.

It truly breaks my heart to read this news. The .357 String Band was one of the elite acts of underground country, one of the best bands to see live, and possibly the best ambassadors and examples to the rest of the world of the type of quality in songwriting and musicianship that the independent country boasts. Their music, influence, importance are truly irreplaceable.