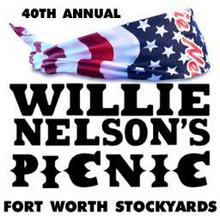 Happy 4th of July everyone, and welcome to Saving Country Music’s LIVE blog of the 40th Annual Willie Nelson’s 4th of July Picnic! This year the picnic is being held in the historic Ft. Worth Stockyards at Billy Bob’s Texas, the “World’s Largest Honky Tonk.”

In between barbecuing and shooting off Black Cats, please check back as we post pictures, observances, and a play-by-play of the Picnic in hopes that you can variously experience a little bit of the magic from one of country music’s oldest annual events.

11:43 PM – Thanks so much everyone for stopping by! We may have some final summation notes tomorrow. Happy 4th!

11:37 PM – As suspected, the event ended with a grand finale of lots of Willie’s friends coming up on stage to sing gospel songs. It started with “Will The Circle Be Unbroken,” turned into “I’ll Fly Away,” then went to “Roll Me Up And Smoke Me When I Die,” and finished up with “I Saw The Light.” Jamey Johnson, Gary Allan, David Allan Coe, Dallas Moore, and many of Willie’s family members all added harmonies to the affair. Willie also gave both Daid Allan Coe and Jamey Johnson opportunities to lead the choir. Excellent ending. 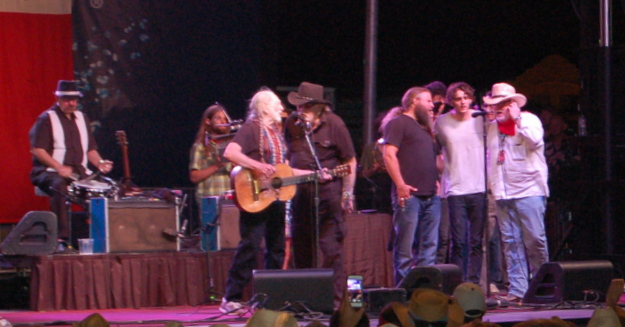 10:27 PM – With all the star power on site, you never know what kinds of collaborations could happen near the end of Willie’s set.

10:08 PM – Willie Nelson playing “Night Life,” fireworks going off all around, weather is great. All is right with life in Texas right now!

9:20 PM – We got Gary Allan for another 30 minutes or so, and then Willie Nelson, and who knows what kind of stage surprises as the stars congregate to finish off the night. Thanks everyone for reading!

9:12 PM – Right now Gary Allan is proving that you can still have mainstream appeal, but write sincere, heartfelt songs.

Remember those pictures from the Pittsburgh Kenny Chesney / Eric Church concert? Well look at the grounds of Willie’s picnic after an entire day of revelry. 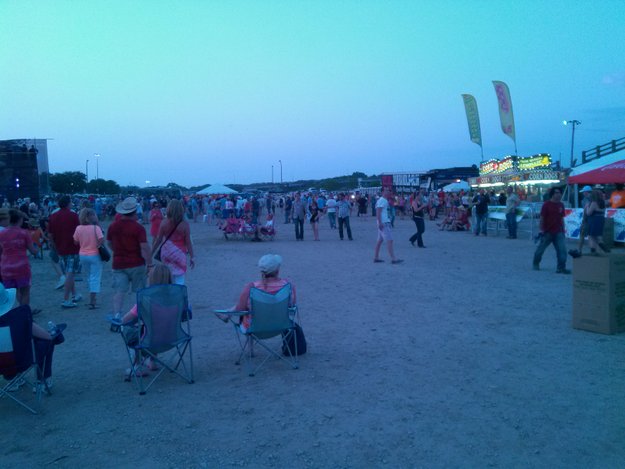 9:08 PM – Sorry for all the Justin Moore ranting folks! I really do want to like the guy, but the fake Outlaw stuff is where I draw a line, at the sainted Willie Nelson picnic no less. I had fallen asleep on this guy after naming his last album the worst in country music history, which I stand by. He has talent, but you can’t get more fake. Here’s a fuzzy picture of this asshat from as close as I was willing to get. 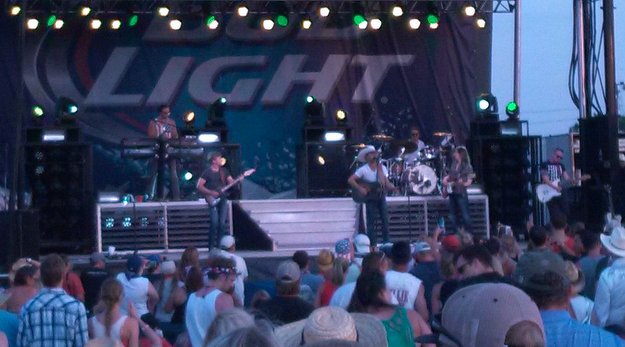 8:33 PM – The best part about Justin Moore’s set is when it ended. Thank God. Gary Allan up next, and them Willie. I seriously feel traumatized.

8:30 PM – I would rather watch Taylor Swift than Justin Moore. Nice! Now he’s playing to a drum machine! Quite possibly the worst country music artist in history. I have a belly full if venom for this guy, and it keeps growing every second.

8:22 PM – And now he’s singing the theme to Monday Night Football. After an entire  day of real artists, Justin Moore is all cliches, the same stupid tricks all these pop country dudes do, trying to get the crowd to sing the lyrics for him and sway their hands back and forth. He’s Scott Borchetta’s little 5 foot, 3 inch Fake Outlaw robot.  Nothing redeeming here, and the scary thing is, for some of these people it is the highlight. And now he’s shit talking Nashville. This guy is bullshit. I may have to rush the stage.

8:17 PM – Justin Moore singing “Bait A Hook” at Willie’s picnic is like a fish out if water.

7:53 PM – Can’t say enough about Ryan Bingham. Not sure if he was just on it today, if the crowd was right, if the big sound system that can gooble some artists up complimented him, but man, he nailed it. Excellent band behind him as well. Two guns up! 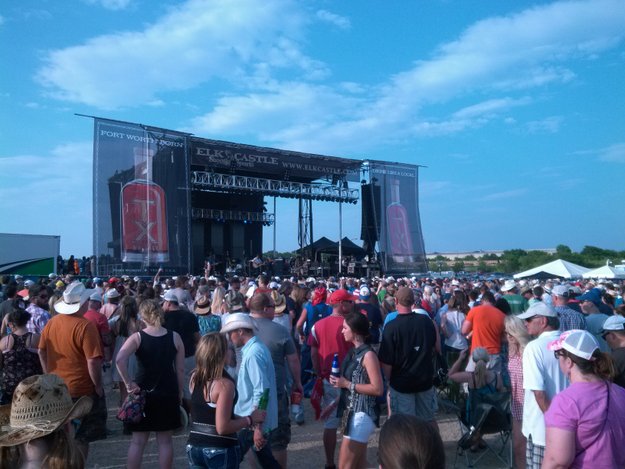 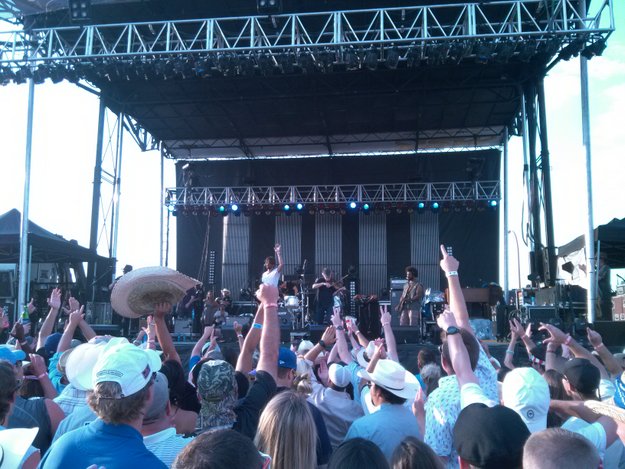 7:35 PM – The Justin Moore set seems like a good time to get something to eat. Don’t particularly care for Outlaws like him.

Actually we’ll give him a fair chance. After we get something to eat.

7:00 PM – Ryan Bingham has a knack of imbibing epicness into his music. Great live performer.

6:55 PM – Massive crowd for Ryan Bingham. All of the day shows inside Billy Bob’s are all done, so most everyone is outside soaking in the sun.

6:45 PM – Dale Watson just finishing up inside Billy Bob’s. Heading outside with the rest of the throng for Ryan Bingham. 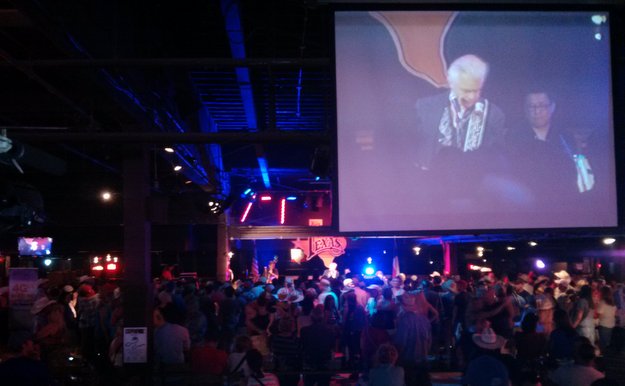 5:57 PM – The incomparable Leon Russell, all dressed in white!

5:53 PM – David Allan Coe and his David Allan hair! My original intelligence was right and Ray did not make it. Hope he is doing well! Will have some more in-depth stuff about what David said RE his recent auto accident soon (and yes, that was the best pic I could get. The sway of humanity in front of the stage was crazy). 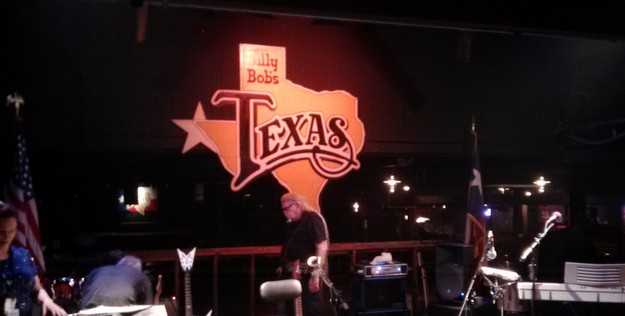 5:45 PM – I’m telling you folks, Billy Joe Shaver pus on one of the best country shows out there. Excellent songs, and a natural showman. Never get tired of seeing him live.

5:30 PM – David Allan Coe finally started to play at 5 PM, and started with a very passionate speech I look forward sharing with y’all soon. Back outside now taking in the incomparable Leon Russell.

5:18 PM – Big update coming up. So many folks here, internet got sketchy!

4:35 PM – Welp, not exactly sure what’s going on. David Allan Coe is set up, but may not play until 5 when he’s scheduled. Meanwhile Asleep At The Wheel is playing outside, with Jamey Johnson coming up, and I’m stuck in a crush of humanity in front of the Coe stage. Could be somewhere worse 🙂 Got a ton of pics to upload as as I can!

4:10 PM – Jumped inside Billy Bobs to see Ray Price at 4 PM and I’m staring at David Allan Coe setting up. If you don’t want to miss him, you better get in here. Meanwhile Asleep At The Wheel is jamming outside. Inside, outside completely packed.

3:47 PM – Billy Joe Shaver: “I’m still here. It’s better to be seen than viewed. So drink up, because it doesn’t matter what goes in your mouth, it matters what comes out.”

3:30 PM – Finally make it inside to catch the beautiful Amber Digby. Completely missed The Quebe Sisters, but you shouldn’t if they come through town. Amazing band!

And now we trek back outside to catch Billy Joe Shaver!

3:08 PM – I won’t lie, Kris Kristofferson had a slightly difficult set. The sound was funky, and he forgot some words. But if he did not deliver the best version of “Sunday Morning Coming Down” I’ve ever heard, I’ll eat my hat. 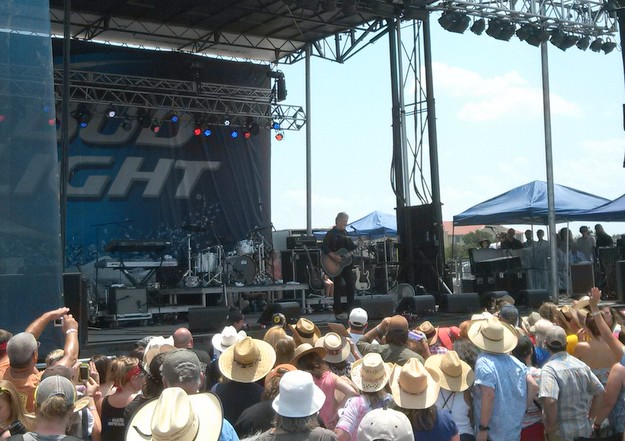 2:45 PM – Randy Rogers right after Kris Kristofferson set: “It sure is hard to get good opening acts these days.”

2:30 PM – Nevermind about Ray Price not playing. Word is he performs at 4 PM in Billy Bobs.

Cool moment on stage when Jamey Johnson came out on stage to help Kris Kristofferson remember some lyrics.

2:10 PM – Kris Kristofferson! The shade came out right as he started. Then so did the sound Gremlins. Then the sun came out again. “I hope it sounds better out there then it does up here.”

2:05 PM – Okay folks from here on out there’s three stages going instead of two. I’ll do my best to keep up. Can someone eat lunch for me? No tomatoes.

2:00 PM – Johnny Bush killing it on the north stage, singing “Leave My Momma Out Of This.” Tommy Alverson and T Jerrod Bonta on stage with him! Kris Kristofferson  coming up!

1:38 PM – Ray Wylie Hubbard says he doesn’t count the years by New Years, but by Willie’s 4th of July Picnic. He’s played just about every one Willie has had. He called up some Dirty River Boys to play with him.

1:35 PM – If you don’t know the name Sonny Throckmorton, check him out. Great songwriter, and a member of the Songwriter’s Hall of Fame. 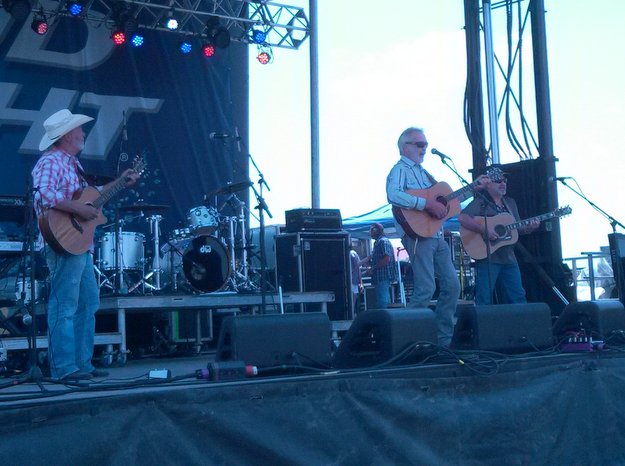 1:30 PM – Seeing a lot of cool folks in the crowd. Saw the Quebe Sisters mulling around who are playing inside Billy Bob’s in a little bit, ans SCM reader/commenter Scott Hartley. 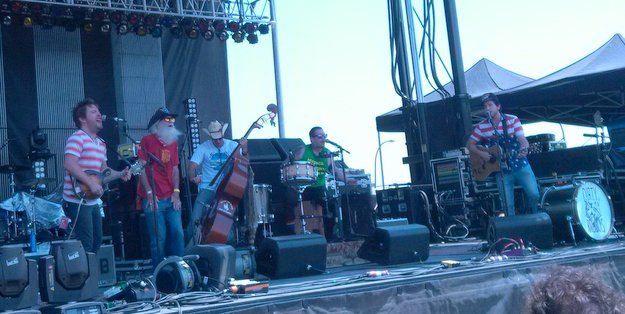 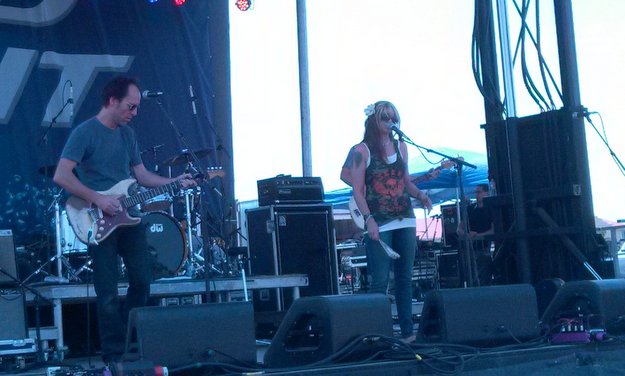 12:50 PM – So the way the grounds are set up, there’s two huge concert stages, one at the south end, and one at the north end of a big field. In the middle is a VIP skybox. It looks pretty empty in here at the moment, but the grounds are huge, and the lines to get in aren’t getting any shorter. By tonight it will be pretty packed. Along the sides are food/beverage vendors. 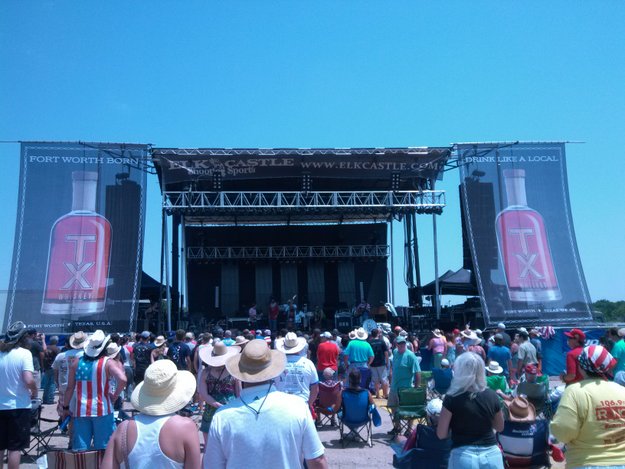 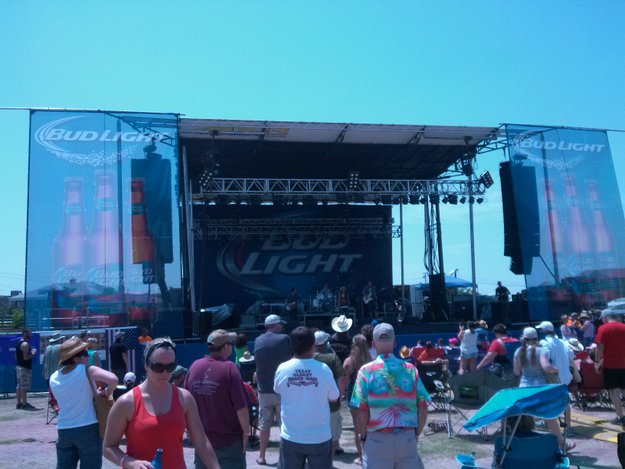 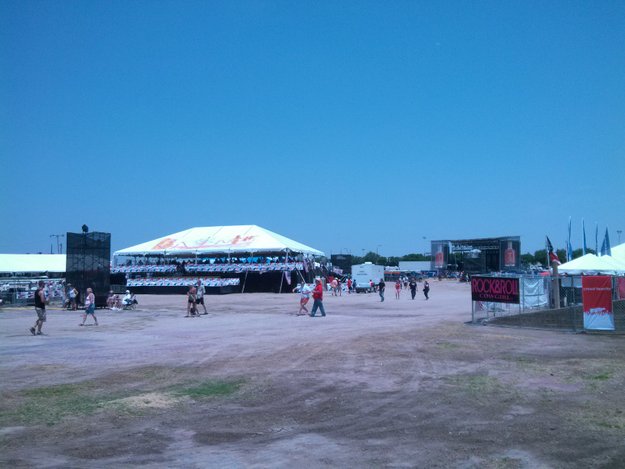 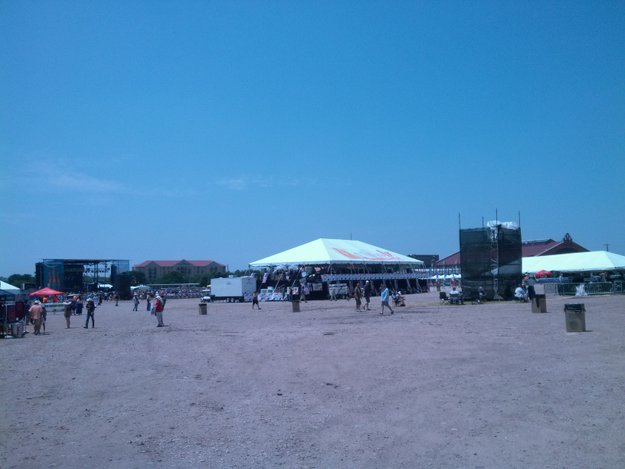 12:45 PM – Paula Nelson now rocking out on the South Stage, with Ray Wylie Hubbard coming up! About to dump down a mess of pictures!

12:07 PM – Dirty River Boys killing it on then main stage as folks continue to file in. These dudes are threatening to blow up this year!

11:58 AM – Ray Price was originally scheduled to play today, but as some of you may know he’s been under the weather, so I believe Sonny Throckmorton is filling in for him.

11:42 AM – Snaking lines as long as a city block to get in as the first band the Dirty River Boys sound test on the main stage.

11:00 AM – It is usually unbearable to be outside in Texas for any length of time in early July, but today it is foretasted to be an unseasonably cool 93 degrees.

10:55 AM – Check out this lineup folks! Like they have to do with the State of the Union addresses, Merle Haggard is being sequestered in an undisclosed location off site, so just in case something happens we still have a country legend left. 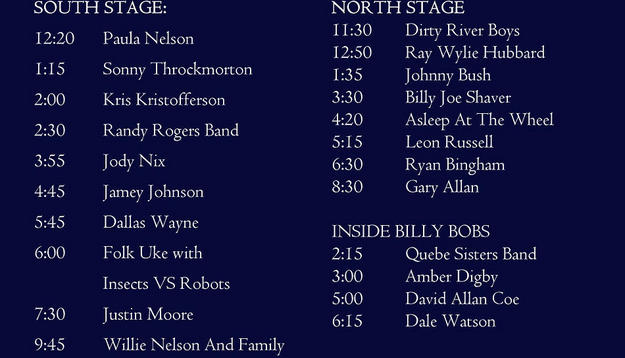 10:45 AM – To prime your pump for the event, here’s some quick facts about the Picnic: 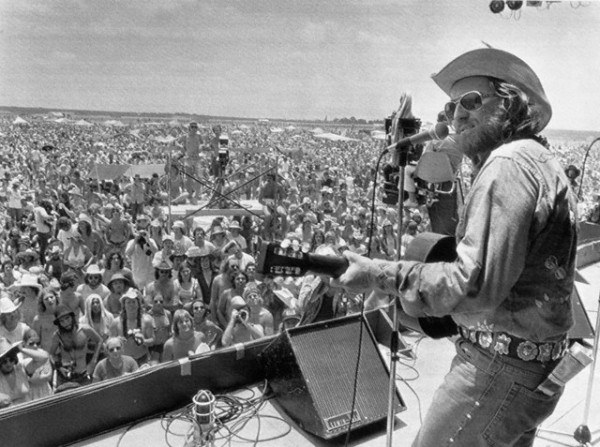