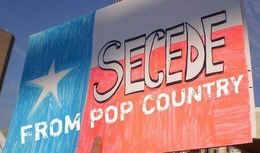 There’s nothing worse than inadvertently coming within ear shot of one of those songs—the idiotic country music laundry list / checklist ditty, or even worse when the performer is inclined to get all hip-hop on your ass and start rapping the lyrics over a drum machine beat. Even when you do your level best to avoid corporate radio, they’ll sneak up on you at the grocery store, come spilling out of some douche-mobile stopped beside you at a red light, or show up in some commercial when you’re watching the boob tube. If you’re anything like me, they can stimulate a strong negative physical reaction that can only be cured by the good stuff—true country music.

The select songs below aren’t country protest songs per se, though they may have those elements. They’re simply songs of a very personal nature with authentic themes told in real language, that speak to being unable to relate to an inauthentic world, and how to value the things in life that are real. Hopefully if you find yourself bent over and fighting back a gag reflex from Class A country checklist exposure, these songs will help cure what ails you.

As bad as the country rap songs are, the videos cause even more cultural corrosion by portraying an adulterated view of true rural people trying to hold on to their agrarian identity. Bare midriffs, buxom gyrations, and badass cars are no match for the curves and character of real country faces served cold. Neither is the caricaturish, shallow, and materialistic portrayal of rural life in country rap compared to the sense of family and community, and the fulfillment of hard work that accompanies true country living. All of these things are embodied in the song and video for Josh Abbott Band’s “I’ll Sing About Mine,” written by Adam Hood and Brian Keane. (read song/video review)

The “laundry list” song formula doesn’t have to be used for the dark purpose of creating a corporate culture based on artifacts and behavior. Naming off artifacts of the country can be a great way to convey the beauty of life through illustrating it’s simplicity. Without question Willy’s “Life Is Beautiful” is a laundry list song; a laundry list song that schools all of it’s counterparts by simply being honest, and thankful. (read song review)

The idiocy on display during a country radio segment is enough to fill one with self-doubt about the entire direction of humanity, especially these long-belabored laundry list songs coming from country’s top male performers. You listen, and say to yourself, “If I hear another song about trucks, I’m going to shoot myself.”

But the beautiful part about music is that as much as it can be the culprit for personal angst, it can also be the antidote. Wade Bowen’s “Trucks” aims its big, diamond-plated bumper at the incessant references to tailgates and four wheel drives in modern pop country songs and slams on the gas. At the same time, it practices what it preaches, making sure to instill some story and soul into the song along the way, instead of just being a vehicle for protest. (read song review)

The miraculous thing about “Life Ain’t Fair & The World Is Mean” is how many subjects Sturgill touches on while saying so little. This ridiculous “new Outlaw” movement in country, how famous country sons dominate the independent country landscape, the way mainstream labels and producers manipulate artists, and how the system is rigged against authenticity; all these subjects are touched on in a song that when you really boil it down is actually a very personal story about Sturgill and his struggles and choices, and coming to grips with the inherent injustices in life and saying “that’s okay.” (read song review)

I think it is important when we talk about saving country music, that we don’t work from a position of envy. In truth the joke is on them. They may have the big money, the control of the radio stations and the media. But we have each other, and true themes mined from real life experiences. Let them have their fake world, we have real music. But “Wish” isn’t necessarily an anti-Nashville song, it is more about the singer realizing that he shouldn’t be envying people living fake lives when he has something true already. (read song review)