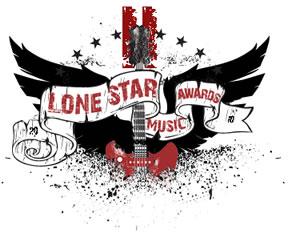 Welcome ladies and gentlemen to Saving Country Music’s LIVE blog of the festivities transpiring as part of the 6th Annual Lone Star Music Awards. The event will be at The MARC (formerly the Texas Music Theater) in beautiful San Marcos, TX, just south of Austin. I’ll be doing my best all night to keep you informed of all the events, performances, and winners. You should get those refresh fingers stretched out, and don’t be shy to pipe up below in the comments section if you have your own observances you would like to share.

This event is not planned to be televised or broadcasted, so I’ll do my best to immerse you in the experience through words and pictures.

10:50 – Alright folks, things are wrapping up here at The Marc! I’ll be recapping the winners and then I will be out of here to the after party at the Cheatham Street Warehouse. Reckless Kelly is closing out the night playing Tom Petty.

Thanks to everyone for following along!

Overall it was an excellent night of some great country music of all colors. So many great musical takeaways on the night. It’s great to be turned onto some new names, and see some deserved names get recognition. It is especially good to see Jason Isbell get some recognition. He was so screwed at the Grammys, it’s good that someone is recognizing what he’s doing, even if it is folks in Texas who he’s once removed from. I think it shows the character of Texas music fans (who voted on these awards) to see he deserved it, as well as giving recognition to Kacey Musgraves who after all, is from the state.

Overall my biggest takeaway might be the very first performers, Zane Williams & Kylie Rae Harris. They made a huge impression. So did Chris King, and William Clark Green. I would have preferred that the organizers would have allowed performers to play a few extra songs, or had something else planned when they began running ahead of schedule, or just finished early. It sapped a little of the enrgy from the place. But overall, it was an excellent night of Texas music fellowship.

10:37 – Everyone who left early is missing out. Reckless Kelly is proving why the deserve the headliner spot. 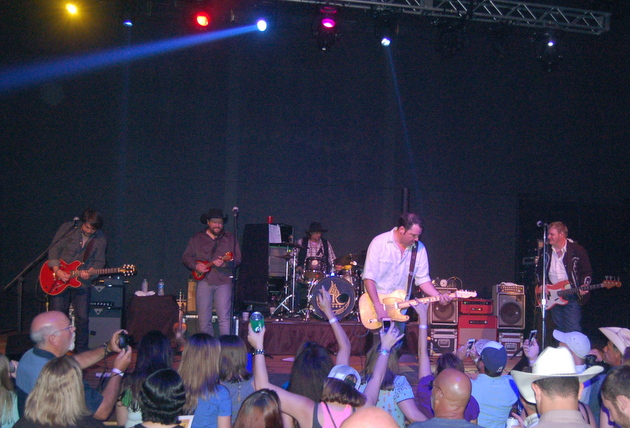 10:28 – Another picture of Joe Ely with Reckless Kelly because they were so badass. 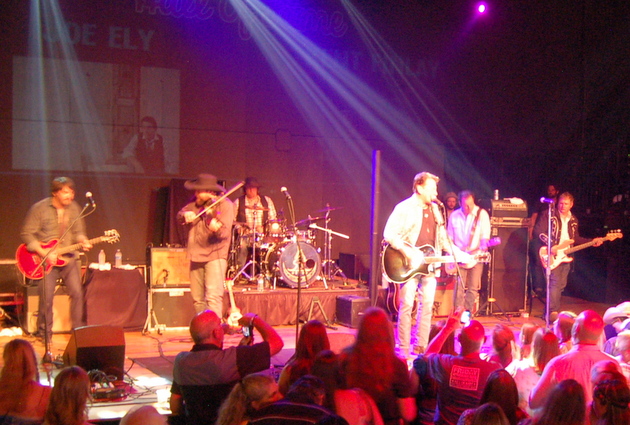 10:23 – I have to say, I had heard William Clark Green’s “She Likes The Beatles” before, but he really sold me on that song with his performance tonight. Reckless Kelly just took the stage to close out the night.

WINNER 10:21 – The Lone Star Music Award for Album of the Year goes to Jason Boland & The Stragglers for “Dark & Dirty Mile”.

WINNER 10:18 – The Lone Star Music Award for Song of the Year goes to William Clark Green for “She Likes The Beatles”.

10:17 Whoa! Joe Ely just killed it! That was Reckless Kelly backing him up by the way. Song of the Year award coming up! 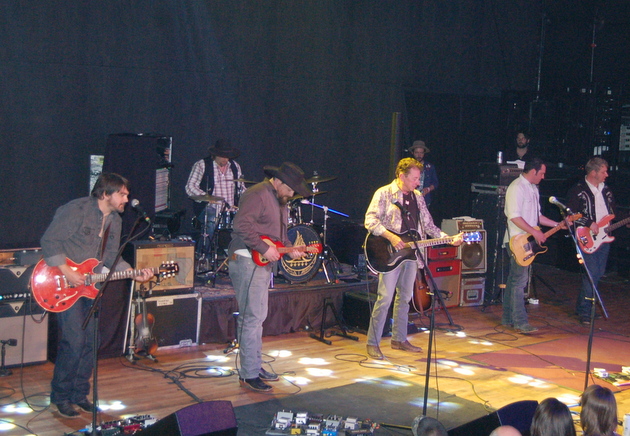 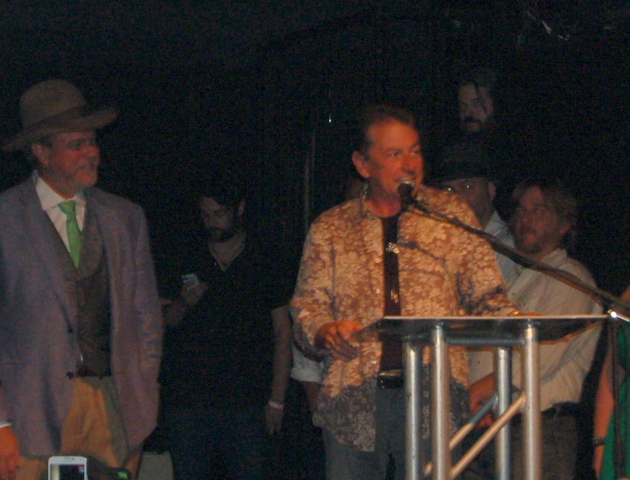 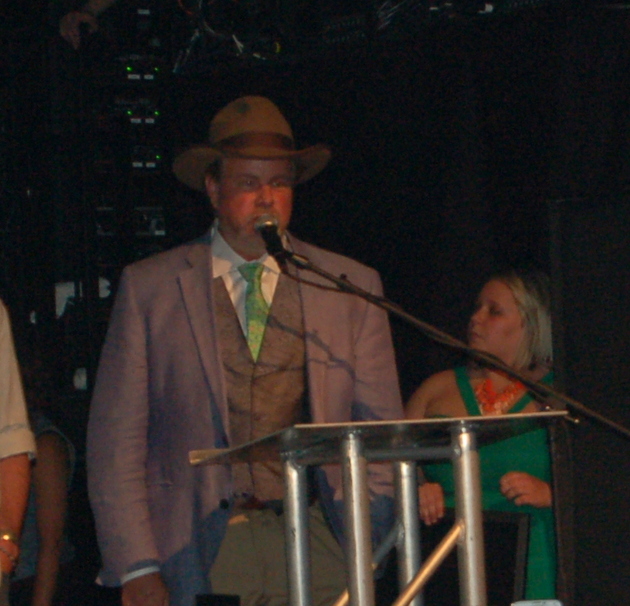 INDUCTEE 9:49 – Robert Earl Keen surprises the crowd by coming out to induct Joe Ely into the Lone Star Music Hall of Fame.

9:33 – So as I explained earlier, somehow this thing got way ahead of schedule (inexplicable for an awards show), and that has made from some awkward pauses in the presentation and some questionable filibustering from the podium. We are waiting right now for the next band to take the stage.

WINNER 9:29 – The Lone Star Music Award for Live Act of the Year goes to The Turnpike Troubadours.

9:25 – Jason Isbell is not on site, so a video plays of him accepting the award, thanking everyone for accepting him into the Texas scene (he’s from Alabama, but married to Texan Amanda Shires who was also up for a couple of awards). Then a Sturgill Simpson plays as they get ready for the next award.

WINNER 9:21 – The Lone Star Music Award for Songwriter of the Year goes to Jason Isbell!

9:13 – William Clark Green singing about his hometown of Tyler, TX. He’s up for the award for Songwriter of the Year, which according to the screens, is coming up next. 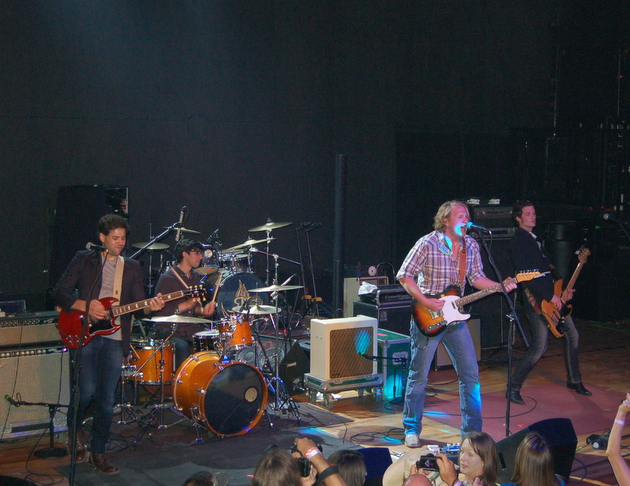 9:09 – By the way, The Marc is the same venue you see if you’ve ever watched The Texas Music Scene with Ray Benson, or seen the videos on YouTube.

8:56 – So they’re literally filibustering now to kill time as the next band sets up.

WINNER 8:50 – The Lone Star Music Award for Singer-Songwriter / Folk Album of the Year goes to Guy Clark and My Favorite Picture of You .

8:48 – So apparently this thing is 20 minutes ahead of schedule. Very strange for an awards show. 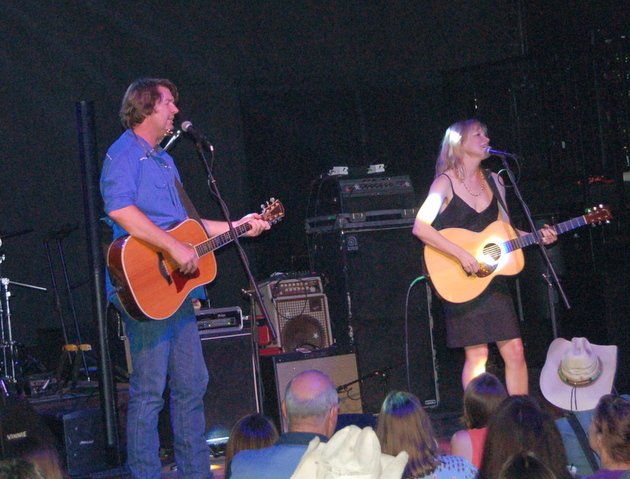 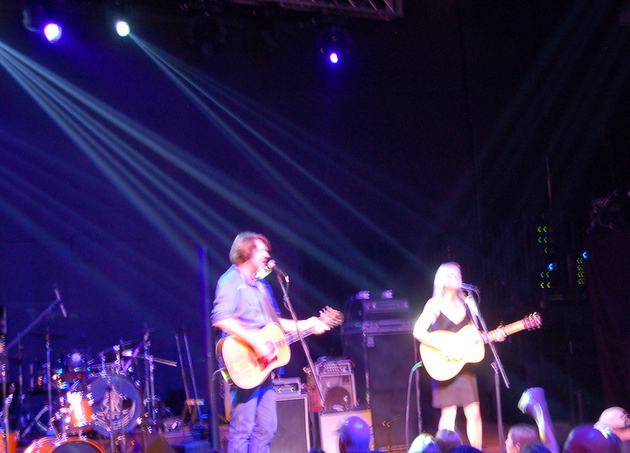 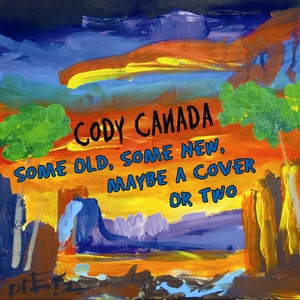 8:30 – One of the coolest moments of the night so far. Dierks Canada—Cody Canada’s son named after Dierks Bentley—accepting his award for Album Artwork of the Year. His acceptance speech is great. That’s the proud father hiding behind the monitor speaker, taking a picture with his phone. 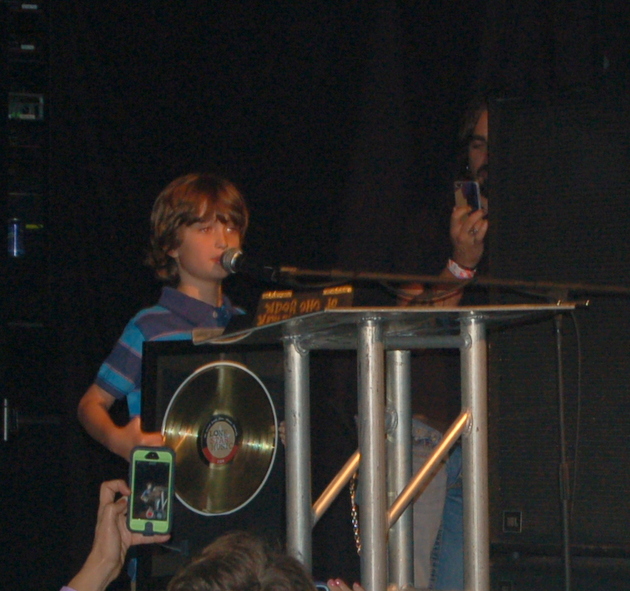 WINNER 8:25 – The Lone Star Music Award for Producer of the Year goes to Lloyd Maines! Lloyd is not here, so a video of him accepting the award (and playing his famous steel guitar) plays on the screens.

WINNER 8:24 – The Lone Star Music Award for Album Artwork of the Year goes to Cody Canada Some Old, Some New, Maybe A Cover Or Two! It was done by Dierks Canada, Cody’s young son (named for Dierks Bentley), who comes out to accept. Very cool moment!

8:20 – The Thieving Birds left a path of destruction, and now to more awards!

8:14 – The Thieving Birds reminding us that what makes Texas music is a mix of country AND rock acts. And below that is a shot of The Marc now filled to the brim with fans. 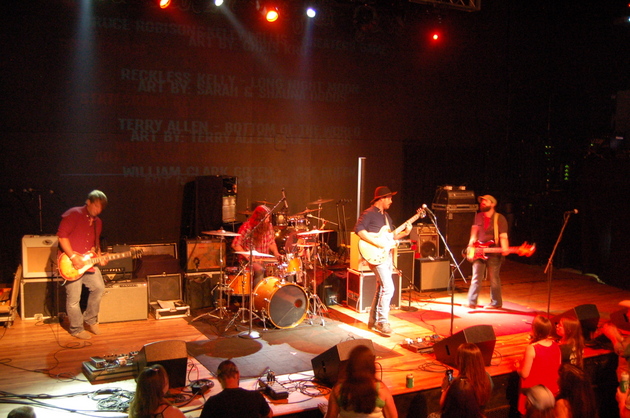 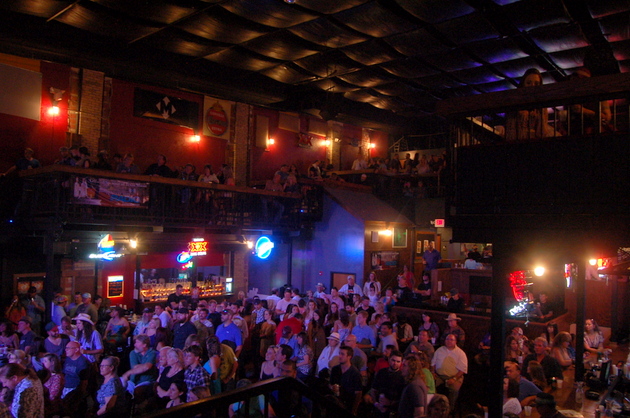 WINNER 8:06 – The Lone Star Music Awards winner for Festival of the Year goes to MusicFest in Steamboat Springs, CO!

WINNER 8:04 – The Lone Star Music winner for the Gruene Hall Venue of the Year goes to the Cheatham Street Warehouse! (where the after party will be).

8:01 – Slaid Cleaves appropriately ends his set with his “Texas Love Song”. He started with “Still Fighting The War”, and told a funny story about finding a piece of graffiti in a New York bathroom that said, “I hate this part of Texas.” 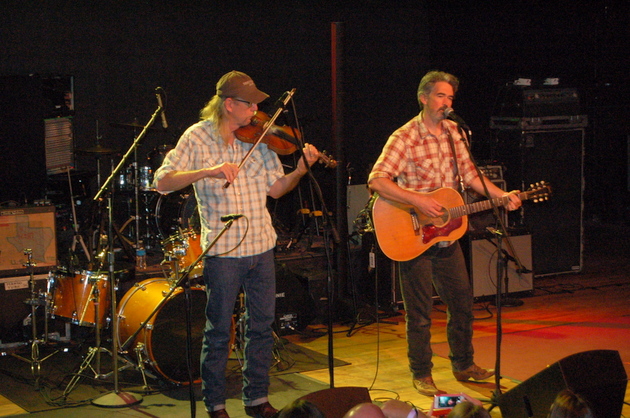 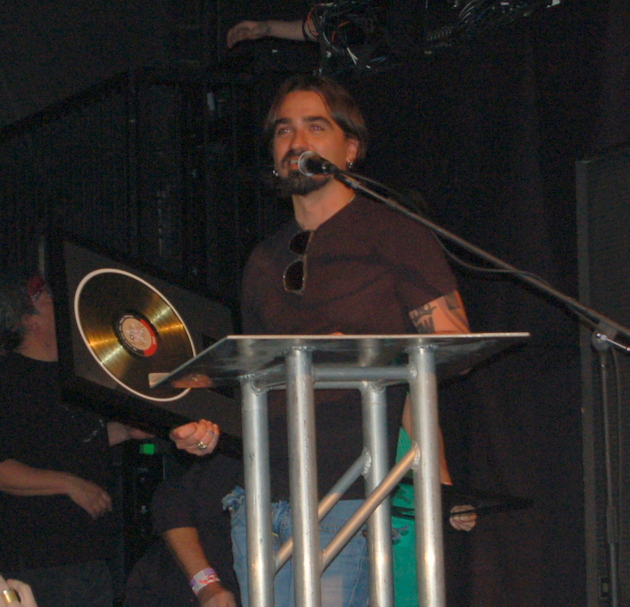 7:51 – The amazing Slaid Cleaves now takes the stage for an acoustic set, accompanied by mandolin.

WINNER 7:48 – The Lone Star Music Award for Musician of the Year goes to Cody Braun  of Reckless Kelly!

WINNER 7:46 – The Lone Star Music Award for Male Vocalist of the Year goes to Cody Canada!

WINNER 7:42 – The Lone Star Music Award for Female Vocalist of the Year goes to Kacey Musgraves! 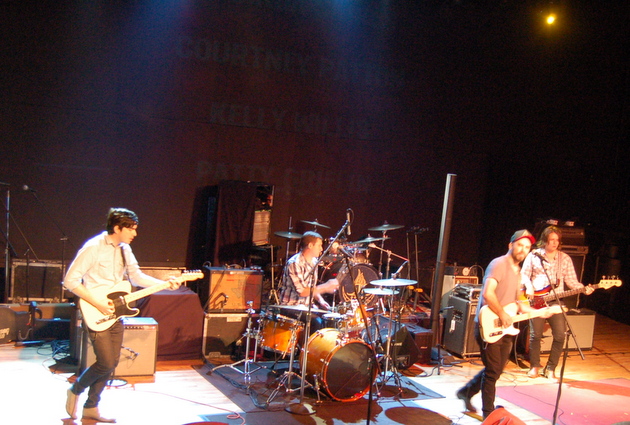 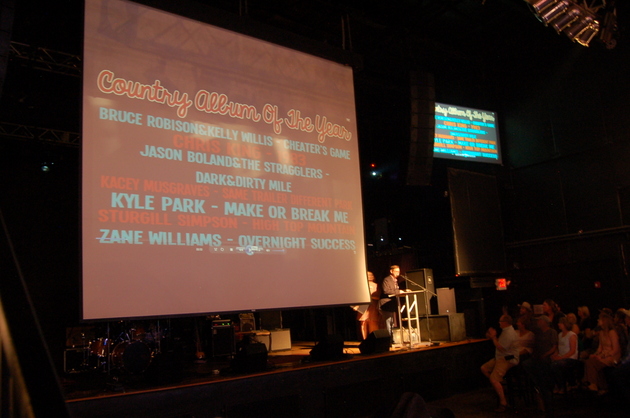 7:30 – Sturgill Simpson probably had little chance of winning for Album of the Year because people are still learning the name, but it was really cool to hear his name called for an award here deep in the heart of Texas, right beside people like Bruce, Kelly, and Kacey Musgraves.

WINNER 7:20 – The Lone Star Music Award for Emerging Artist of the Year goes to The Thieving Birds!

7:11 – Zane Williams & Kylie Rae Harris. Zane introducing the third song says that Kylie was  “The most serendipitous thing that has happened in my career.” He tells the story of how she walked out of the crowd at a show in McKinney, TX and asked if she could sing with him. The rest is history. 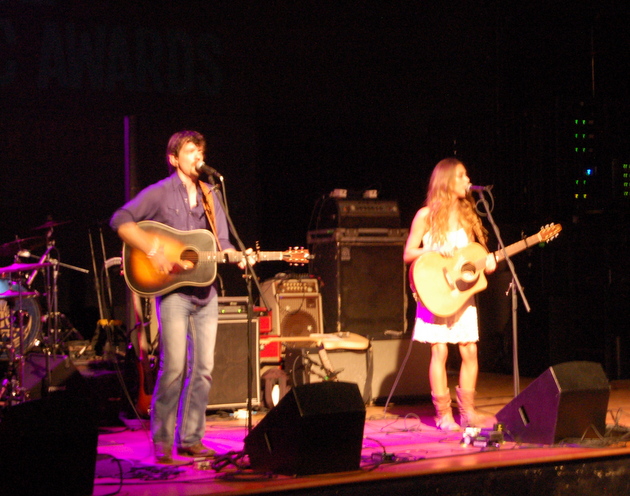 7:04 – The presentation stars off with Zane Williams & Kylie Rae Harris playing an acoustic set. The sound in this place is great.

6:56 – The Marc is a beautiful music venue, with excellent sound and great sight lines. THere is a bottom concert area, and then huge balconies flanking the sides and along the back of the venue. The ruffles you see on the ceiling is for acoustics. There are two big screens flanking the stage, and between acts, a large white screen descends to hide the band changes, while awards are presented on stage right. If it is like last year, each performer will perform around three songs: a breath of fresh air compared to most award shows. It has really filled in since I took these pics. As you can see, the panty line formed early ;). 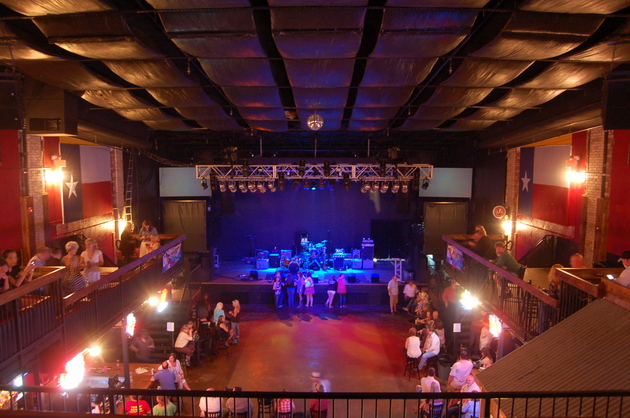 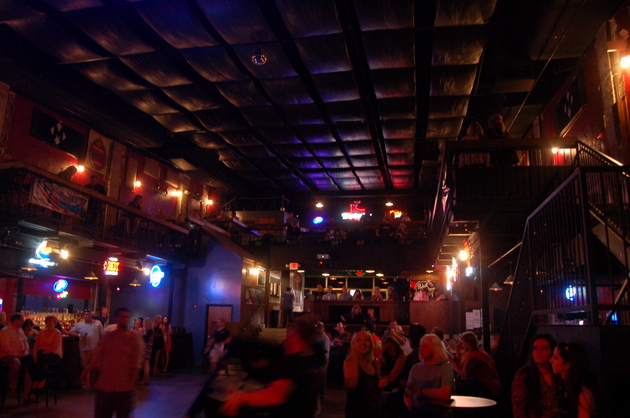 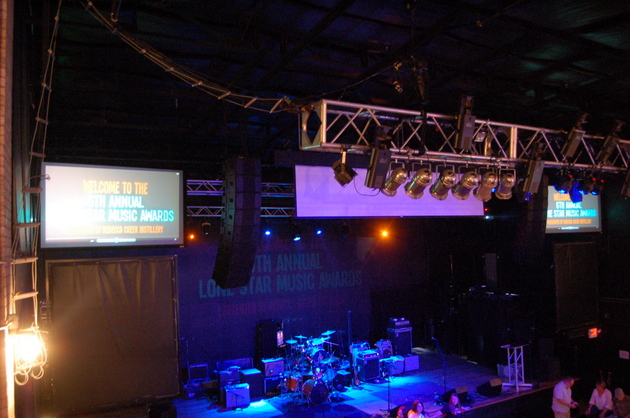 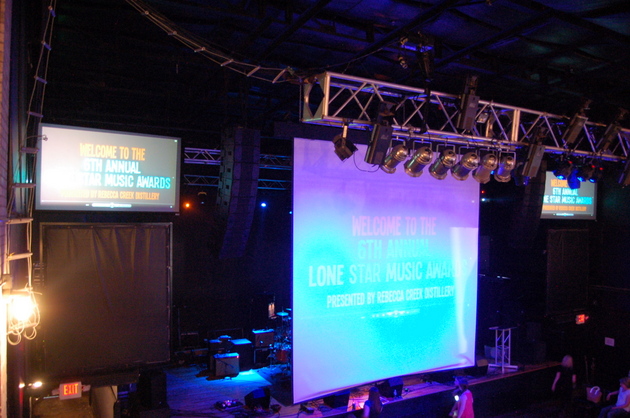 6:50 – So to help set the setting, here are some pictures of where we are. San Marcos is just south of Austin, and has a beautiful downtown square where The Marc is situated. Like many county seats (San Marcos is the seat of Hays County), there’s a big court house in the center, with a square of old brick buildings around it. I want to say the marquee was a lot more impressive before it because The Marc, but I may be wrong. 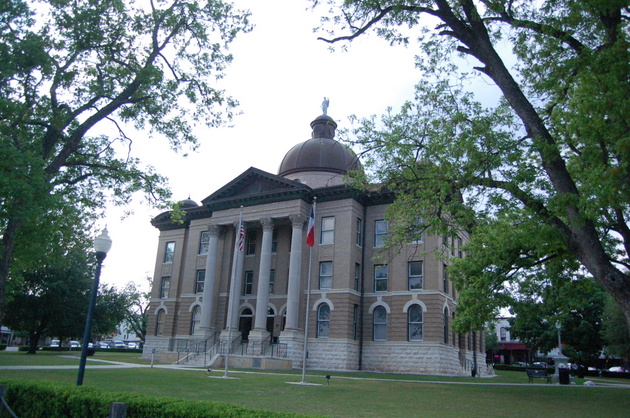