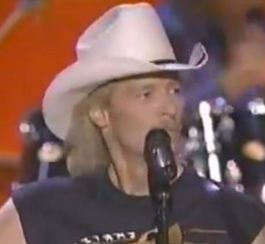 All mainstream musical performers are probably asked to do it at one time or another, but whether a musician is willing to lip sync a performance or play to a non-live musical backing track is what separates the boys and girls from the women and men. Some music institutions like Dick Clark’s American Bandstand or Britain’s Top of the Pops just expected their performers to pantomime. Many did, some didn’t, and sometimes when contractual obligations kept the performers from refusing to “play” or walking away completely, they figured out creative ways to get the point across that faking it was not for them. Here’s nine of these such memorable moments captured on tape.

It was August of 1986, and English heavy metal band Iron Maiden was asked to lip sync and play to a backing track of their song “Wasted Years” on the German TV program P.I.T. In typical heavy metal fashion, Iron Maiden refused to acquiesce, and instead made a mockery of the entire proceedings by swapping instruments back and forth ridiculously while the backing track rolled on seamlessly not missing a beat.

This was one instance where the mic was live, but the band wasn’t. As Nirvana was exploding in popularity in 1991, they were asked to “play” in front of a live crowd for the TV show Top of the Pops to the track straight off the record, with Kurt Cobain singing live. The idea didn’t go over very well with the Grunge god, and so as the rest of Nirvana acted ridiculous, Kurt sang in an octave lower than normal, with alternative lyrics to “Smells Like Teen Spirit” that start off, “Load up on drugs, kill your friends…”

Another instance when the lead singer was actually singing, but the band wasn’t playing. Before the show, producers had told Alan that he had to play to a pre-recorded track, which Jackson clearly felt was tantamount to lying to both his fans and the audience. So instead of playing along with the charade, Jackson tipped off the audience to the subterfuge by telling his drummer Bruce Rutherford to play without sticks. So as the performance transpires and everything sounds perfect, there is Alan Jackson’s drummer, swinging his arms like he’s playing the drums, but with no sticks in his hand. Genius. (read more)

When English rock band Muse appeared on the Italian television show Quelli che il Calico and were asked to perform their song “Uprising” to a backing track, they thought they would pull a fast one and have the players all switch up instruments. For example the guitar player and singer was playing drums, and vice versa. What’s even funnier is the hosts of Quelli che il Calico were so unfamiliar with Muse that they had positively no clue what had been done. The incident became somewhat of a scandal in Italy when Muse was accused of trying to trick the hosts, but really they just didn’t want to fake it.“We just did it for a laugh really, just to have a bit of fun, but it actually turned out to be quite a thing,” guitarist Dominic Howard told Spinner.

Muse might have taken their cues from Oasis who appeared on the British-based show Top of the Pops. Though Oasis played Top of the Pops numerous times without incident, in 1995 in apparent lip sync protest, brothers Liam and Noel Gallagher switched vocal and guitar spots.

Legendary frontman for the Sex Pistols Johnny Rotten brought his post-Pistols band Public Image LTD to Dick Clark’s American Bandstand in 1980, and who thought this was going to go well? Of course like every performer on American Bandstand, Rotten and Public Image were asked to pantomime, and instead made a mockery of the presentation. When the camera cut to Rotten, he was sitting down. Then he entered the studio audience, and eventually coaxed many audience members to join them on stage. It was a moment of pure television madness, and for a full 10 minutes as the band was asked to play (or not play) two songs. Credit must be given to Dick Clark though for being a good sport, and rolling with the punches.

Yet another Top of the Pops moment, punk band The Stranglers were asked to perform their song “No More Heroes” lip syncing and “playing” to a backing track. The performance starts with lead vocalist and bass guitar player Jean-Jacques Burnel ridiculously mouthing the words, and then descends into the band positively dismantling the stage as the drummer turns his back to the camera, but still fake playing.

What’s even funnier is that it happened a second time with The Stranglers on Dutch TV the same year, and with the same song. This time the performance was even more mad, and the players switched spots. Someone didn’t get the memo.

Apparently one of the first times American Bandstand was stood up by a musician was when J.J. Cale made his way to the studios to perform his song “Crazy Mama”. Of course when Cale was told he must lip sync to a recorded track, he high tailed it out of there, despite the pleadings of producers and Dick Clark himself. Though there’s no footage of the incident, it was memorialized in cartoon by The New York Times after J.J.’s passing.