A Bigger Concern for Country Than Some Festivals Going Belly Up

In 2013 and 2014, country music was where to put your chips. Bet it all on Florida Georgia Line baby! Bro-Country was king, and everyone in entertainment and media was looking to ride the country music gravy train to big corporate profits. The Dickey Brothers of Cumulus Media hatched an ambitious plan to create an entire “NASH” lifestyle brand with restaurants and food products, furniture and paint, and a clothing line to go along with their country music radio empire. Rolling Stone and People launched satellite properties completely devoted to covering country music. And anyone and everyone was launching country music festivals all across the country to cull as many dollars out of party hearty corporate country consumers who work hard and spend harder.

And then reality set in.

As Bro-Country was on the rise, think pieces all across media questioned the sustainability of such shallow music. And it turns out they were right. Florida Georgia Line and others brought throngs of new fans into the country fold, but they weren’t there to stay. Listeners moved on to the next craze, and even when country’s footprint was growing, it wasn’t growing at such a clip that it could sustain all the festivals, media, and lifestyle brands being set up to take advantage of its resurgence in popularity. Then the resurgence quickly turned into recession, and now all across the United States there’s promoters and companies left holding the bag.

We first though the the bursting of the country music festival bubble had to do with massive live music promoters like LiveNation and AEG monopolizing the space and squeezing the little guy out. Last summer, Saving Country Music posted an article called, “The Country Music Festival Bubble Is Bursting,” highlight how fests like Thunder on the Mountain, Country FanJam, Cross Country Lines, and the Country Music Life Festival had all been canceled or had resulted in financial ruin for their promoters. A month later, Merle Haggard canceled his headlining set at the inaugural Ink-N-Iron Fest in Nashville last minute after concerns about money, and since then the parent company has called it quits. 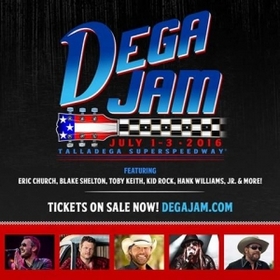 Here six months later, the war of attrition in country music fests is showing no signs of slowing down, and it’s beginning to hit the big boys, and in a big way. Tuesday (2-23) it was announced that the inaugural Dega Jam scheduled to go down at the Talladega Superspeedway July 1-3 with headliners like Blake Shelton, Toby Keith, and Eric Church has been permanently canceled. The event was being promoted in part by AEG Live, which is #2 to LiveNation in the mega tour and festival space. Another AEG event, the Big Barrel Fest in Dover, Delaware was also put on ice before its second year. And not to be outdone, two LiveNation-sponsored events—Farmborough Fest in New York, and Delaware Junction in Harrington, Delaware—are also not moving forward as planned.

You combine these four cancellations with the cancellations last summer, and things begin to look quite bleak. But don’t start screaming that the sky is falling if you’re working in the country music industry, or start jumping up and down if you’re one who hopes for the industry’s implosion. There are some factors here to take into consideration.

It’s not that country music is in a free fall. The resurgence of interest in country was real, and it probably necessitated a few new festivals. The problem was that with so many promoters doubling down on country music, supply began to outpace demand. Maybe half a dozen new “destination” festivals were called for, when a dozen or two is what we got. The Country 500 Festival was announced in Daytona, so did we really need a similar festival in Talladega? Weren’t they competing for many of the same consumers? Meanwhile other older, more-established festivals were adding extra days, and booking bigger headliners that previous years as they followed the lead of LiveNation, AEG, and others to bet big on country. At some point promoters just ran out of space on the map, and time on the calendar, and started butting up against each other to reach a finite numbers of fans.

It’s no coincidence that two of the recently cancelled fests are in Delaware, and another in New York. Don’t underestimate how many country fans there are north of the Mason Dixon Line, but when festival organizers tried to double up in areas where there isn’t a traditional concentration of country music fans to begin with, it spelled disaster. Many of country music’s interloping fans enticed into the genre during the Bro-Country era were not from country’s traditional epicenters of the South, West, and Midwest. So the erosion of interest in country in parts north was likely disproportionately greater than compared to the South for example. Also, you’ll notice that one of the Delaware fests was sponsored by AEG, and one was sponsored by LiveNation. It’s not unusual to have competing companies set up rival events or locations just to make sure the other doesn’t gain a foothold. Think of Lowes setting up locations right beside every Home Dept. In the case of Delaware, AEG and LiveNation appeared to cancel each other out and both lost the bid.

But the recession in country music is not imaginary, and it doesn’t only have to do with a glut in festival inventory. As Billboard recently pointed out in an article entitled “Inside Country Music’s Very Real Sales Dip in 2015“:

Of course every genre is seeing sales of physical and downloadable music fall, but not to the degree of country music. Streaming offers a little hope, but less revenue for artists, labels and songwriters. That is why the live space in music is more important than ever. Artists must make their money out on the road, and that’s what makes so many failing festivals, whether big or small, and failing venues all across the country so troubling.

Bro-Country was supposed to save the country music industry, and it did to some extent. But it also set up the genre for a precipitous fall. Metro-Bro from performers like Sam Hunt is what the industry hopes replaces Bro-Country and brings country music back up to its 2013-2014 sales levels. But look at the career arc of Jerrod Niemann, who arguably started off the whole Metro-Bro craze with his #1 hit “I Can Drink To That All Night.” Niemann has since been dropped from his label, and is considered a has-been by the industry. If you live by trend and hype, then you die by it.

Country music would be better off finding artists who can launch sustainable careers, and by looking to build more diversity into what it offers to consumers with more traditional-sounding music, and music of more substance to help insulate the genre from trends and mood swings. We’re staring to see that with some female artists like Cam and Maren Morris, and Tim McGraw has been proving lately that there’s still room on the radio dial for good songs.

Lessons abound as we watch festivals get canceled left and right, sales slump, and artists’ careers take nose dives after trying to follow hyper trends. But the question remains, will country ever learn those lessons?