One of the singles on country radio right now is Taylor Swift’s “Mean”. As Taylor says in the preview of the song, it is about “…one guy…who just crossed the line over and over again of just being mean.” Prompted by numerous people saying the song was about me, I dared ask the question, which apparently since Carly Simon wrote a song about this subject matter, you’re “vain” for even broaching the subject, though I would counter by asking if someone asks the simple question and the answer is “yes”, are you being vain, or just perceptive?

The popular belief is that “Mean” is about music industry guru Bob Lefsetz. Problem is, even according to Bob, he does not fit the criteria Taylor lays out in her song. Bob really didn’t cross any lines “over and over”, he simply took the point after her bad performance on The Grammy’s with Stevie Nicks to say that now that we all knew Taylor Swift couldn’t sing, it was over for her.

The one big piece of evidence pointing to Bob as the subject of “Mean” is that in the liner notes, Taylor CAPS certain letters to hint who songs are about. In “Mean” they spell out “I THOUGHT YOU GOT ME.” Taylor & Bob were close until his post-Grammy premature epitaph. Though this goes against the grain of someone criticizing her “over and over”. Taylor may have one primary person in mind for the subject of “Mean”, but I think she drew inspiration from multiple sources, and because of the tone and exposure of my post-Grammy rant, I do feel like she read it, and pulled out parallel launguage (ex. “The cycle ends right now”) for the song.

Go ahead, call me vain. I’ve been called worse.

But both Bob and I were wrong in saying she would flame out. I still say she is not country and that her voice is weak, but unlike 80% of the stuff coming out of Nashville right now, Taylor Swift is doing what she wants to do. The 80% is doing what they think will sell. Taylor is leading, while everyone else is following. When she won CMA for Entertainer of the Year, she symbolized the worst of country music. Six months ago, she symbolized the median. Now she may be one of the standard bearers for mainstream country music, as sad as that may be.

Taylor and her handlers must be at least slightly disappointed in the performance of the album’s singles. There’s been no blockbuster #1’s, not even close. “Mean” peaked at #6, and now sits at #17. Maybe it’s because a lot of these songs are too long, and some too good for the demographics they target. As the rest of country music is dumbing down, mistakenly thinking this is Taylor Swift’s appeal, Taylor is maturing, and though her talents might be minimal and her perspective pallid and shallow, someone making art honestly will always trump something made to mimic something else. As country songs, tracks from Speak Now are a joke. But as pop songs, they carry some weight in a mainstream music world where little else does. 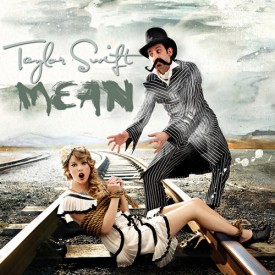 But “Mean” might be the worst track on her Speak Now album. It is the most “country” song on the album, but it is not catchy like “Enchanted” or “Sparks Fly”, or clever, or well-crafted.

Calling someone “Mean” is just such a base accusation. This isn’t punditry, it’s name calling. Maybe this song would have worked if she delved into the psychology of why people are mean, or even created some sympathy and understanding for her bullies. But instead she descends into the same “Mean” mentality herself, calling her detractor(s) “…pathetic, and alone in life”. Think about it: If someone truly is alone in life, then that is a pretty harsh mean-ism.

There’s certain ways you can handle criticism. You can ignore it, deflect it, debate it, or you can absorb it and attempt to learn from it. Or you can try to avenge it, which Taylor seems to be doing with “Mean”. Some more insight on how Taylor deals with her adversaries can be found in the song “Better Than Revenge”. Revenge is anger that is personalized. Good music uplifts the soul, or nurtures it by providing camaraderie through pain. Revenge brings down the soul, to a carnal, reactionary state. Revenge is also a sign of a young soul. “Dear John” from Speak Now did a surprisingly good job humanizing Taylor Swift. “Mean” just makes her come across as spiteful, immature, if not hypocritical.

It goes without saying that when you’re in the public eye, there will be people who will use your persona to vent anger. I can tell you with certitude, whoever the next President of the US is, regardless if he’s the greatest humanitarian who ever lived, there will be people painting Hitler mustaches on his image before he even signs one piece of legislation. Hating Taylor Swift is the new world sport, evidenced by this Hater’s Guide to Taylor Swift published on of all things, a sport’s site. This type of anger venting is not only unfair to Taylor, but unfair to critics who are trying to fight for the integrity of a form of music they love, by painting all Taylor critics as just “Mean”.

But it goes without saying that Taylor Swift will have the last laugh between her and her critics. She’s a millionaire, going on billionaire, and showered with accolades and awards beyond belief. So who cares if a few music nerds pick fun at her?

Or is the last laugh hers? What is more valuable, wealth that will be gone the moment her heart stops ticking, or a life full of learning and humility and giving that is nurtured by attempting to build understanding through conflict with other humans?

Taylor Swift has come a long way in my estimation over the past couple of years. But if she wants to go farther, she must understanding that some of her critics are not simply being “Mean”, they are simply “right”, and understanding and admitting to her limitations and shortcomings is the only way she will ever get past them. I still assert that in the end, I will look like Taylor Swift’s best friend. The people who were “Mean” to her were the ones that told her she was country. Without that simple designation to her music, I and many others would have never raised our poisoned pens against her.

There are a lot of songs on Speak Now that are good…as POP SONGS. But “Mean” is not one of them.

Joe Buck about Taylor Swift: “I think she’s got talent”, from September 2010 interview.