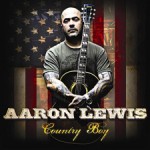 For the past month or so, I have been smattered with emails from folks wondering my reaction to Aaron Lewis from the rock group Staind “going country,” and specifically about his song “Country Boy.” Haven’t I written this blog enough times before? It is very simple people: if you’re used to putting out albums that sell over a million copies, you better make the leap to country or hip-hop, because those are the only two commercially viable genres left in mainstream music.

Though I guess I can see when some hear “Country Boy” thinking it might be something I’d approve of. It begins with Aaron talking about how LA made a product out of him, and how he’s fighting that off now, aka the whole country music Outlaw Archetype. George Jones and Charlie Daniels make appearances in it, and who can hate on George and Charlie? He talks pretty in depth about his guns, and hey, I’m The Triggerman after all.

The problem is this is all a formula. And what’s the formula if you want to go country? I’ve said it a dozen times on this website before: 1) Say you’ve always been country, listened to country, and are from the country. 2) Enlist a legacy act to add country legitimacy to your project. 3) Write a song with a laundry list of things that make you country. And these days if you can throw in a weed reference, that is especially good for marketing.

“Country Boy” follows this formula to a T, so much so I feel embarrassed for him. He took the of the formula’s exact carbon copy and forgot to fill in the blanks to give a token gesture to originality.

And the song is not country, despite the title, despite George Jones’s weak, and honestly, just sad vocal performance, Charlie Daniels’s out-of-place fiddle and lip-quivering political proclamations, or the dizzying amount of qualifiers that Aaron throws out to let you know just how country he is. This is a slow-tempo rock ballad and nothing more, and not even an original one at that. It is Hank Jr.’s “Country Boy Can Survive” repackaged into a predictable rock song. Jr’s version at least conveyed the theme that country people can survive hard times because they are self-sustaining. Aaron just drolls on an on about himself while the video shows off how much cool shit he has.

I have no doubt that Aaron Lewis is a proud American, and that he is a “country boy” in the sense that he lives in the country. After all, he wouldn’t shut the hell up about it for the 5 minutes of this song. I have no doubt that he likes to dress up in camo and run around his land playing GI Joe, driving around in a boy toy surplus army truck like Sergent Slaughter. I have no doubt he dropped $5,000 on the best bow-hunting rig and goes to bed spooning his M-16, praying every night that someone comes crawling through his window so he can be a hero. I have no doubt he loves his tattoos, and first and foremost, himself. But none of this makes a rock song country.

And let’s get this straight: He lives in a town of 1,200, but feels the need to stuff a .45 caliber down his shorts when he goes to the Piggly Wiggly to pick up some 2% milk? What, he thinks Bin Laden is gonna jump out from behind the Dairy Queen and throw an anthrax bomb at his kids? If you’re packing every time you leave the house, that sounds pretty ghetto. Maybe he should take those millions he made singing to angst kids of divorce and get some better digs. In fact I bet the town of 1,200 is more scared of him. Somebody slams a car door too loud and he’s whipping out firearms and looking for turbans to mow down. And is the reason the town he grew up in one we’d “never know” because it’s so small, or because it is north of New York City? Be proud of where you’re from, wherever that is. Don’t hide behind ambiguity because it’s closer to Boston than Birmingham.

And Arron, just because your grandfather was in the military, and you have an army truck and play with your privates, doesn’t mean you have any more military cred that anyone else my friend. My father and grandfather served too, but I’m ashamed that’s all the military cred I have, I’m not proud of it, parading it in front of other people’s faces in a self-righteous manner.

I know some of you watch this, and you see the stars and stripes waving, hear him talk about how he is strong in his beliefs, and you start to feel that American pride welling up inside of you until you want to start pumping your fists and screaming out, “Hell yeah man!” But he’s doing this because he knows it will solicit a strong reaction. He is pandering to demographics and constituencies to sell more records and hopefully be accepted into the country fold. As a country music lover, as a responsible gun owner, as an American, and as the offspring of men that served, I am insulted by this song, and how it uses my beliefs as a marketing tool, and does so in such an easily transparent way that it is an insult to the intelligence.

This song makes me want to vomit. It perpetuates every single negative stereotype about gun owners and patriots that is possible. It paints them as ignorant, self-centered assholes that feed their pit bulls gun power and beat their girlfriends with rubber hoses.

He’s trying to capitalize on pro-American sentiment, pot smokers, patriots, pro-gun people, the Tea Party, and the movement of rock and pop into the country music supergenre all in one song. That’s a mouthful; it’s no surprise some of the phrases don’t even rhyme. And if capitalization isn’t the case, then why not work in even one little bit of subtlety into the lyrics. The song comes across as being almost psychopathically obsessed with political issues that aren’t even current, and the whole thing seems to be horrifically outdated in regard to context.

And if I take Aaron at his word, that the person he was when he sold 15 million records with Staind wasn’t him, that it was a product of LA, then why not fess up for 12 years, making millions of dollars off of loyal fans? Is he ashamed of Staind’s music? Then why does this song sound like every single one of their songs except with a dobro? Same structure, same monotone vocals with no range.

And I love Charlie Daniels and George Jones, and anyone who says differently clearly doesn’t not know what goes down on this website, but it was a huge unfortunate mistake on their parts to hitch their wagons to this. How about trying to enter country by actually playing country music, instead of singing about you, and more you, while trying to head off anticipated arguments from country hardliners before they are even made. Just sing from the heart man, then I might dig it.

Can we go back to the old reality where Taylor Swift was the worst shit I had to listen to to do this job?