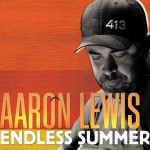 Isn’t Arron Lewis bored yet and ready to return to butt rock? Apparently not, as he told The Tennessean late last week he’s planning to release a “very country” album in June. What does “very country” mean? If his previous song “Country Boy” is any indication, it will be songs with laundry list country lyrics, and that’s exactly what you get with his new single “Endless Summer” just released to the always gullible and complicit entity known as country radio.

Since Aaron Lewis doesn’t know shit about country music, we can’t expect him to stray too far from The 6 Pop Country Song Formulas, but someone forgot to tell Arron Lewis it looks dumb when you publish the “Summer Song” formula verbatim without filling in any of the blanks to complete the ruse. Didn’t they at least have Mad Libs in the power elitist, ultra-affluent area code 413 hamlet of Longmeadow, Mass. where he grew up?

In this dumb, unremarkable song, Aaron does do two pretty remarkable things. The first is he name drops Jason Aldean of all people. That’s right, designer jeans fashionista Jason Aldean is now cool enough to name drop in a song when you’re a struggling, aging rocker grasping, clawing for any tiny bit of mainstream relevancy or attention. And then after Aaron says how proud he is that his girls sing along to Jason Aldean, he calls out Miley Cyrus, saying, “It makes me smile just a little bit because it’s not a Miley Cyrus song.”

Miley Cyrus is a colossal trainwreck as well, but at least she is true to herself. A couple of years ago when she was interviewed by Parade, Miley said she is steering clear of country because country “feels so contrived on many levels.” Guess who Miley is talking about Aaron, she’s talking about your genre-hopping ass, the transparency of your stupid summer song, and your designer jeans model buddy Jason Aldean.

I wonder if Lewis will have Fred Durst of Limp Bizkit sit in with him like he did on “Outside”.

I can see through you Arron, see your true colors. Inside you’re ugly, ugly like Miley.

Actually I thought Miley did a decent job covering Bob Dylan’s legendary “You’re Gonna Make Me Lonesome When You Go” for the Chimes of Freedom Compilation. I’d take it over anything from Aaron Lewis any day.