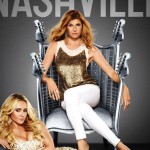 You can probably make a pretty good case that no matter what ABC’s new drama Nashville served up I was predisposed to not like it. I’m one of those non-TV snobs whose never had cable, and though I’ve attempted to be vigilant over the years separating the City of Nashville from Music Row, the erosion of many music values has happened within the confines of that fair city’s four corners. And being an individual who grew up in Dallas but lived most of his life away from it, I know just how hard it is to slay negative stereotypes hardened into the brain by pop culture and television specifically (no, I don’t own cattle or work in the oil business), and cringe at what a series like this could do to the perception of what I have found over the years to be a beautiful and diverse city.

The early reviews of Nashville have been of the nature where you can sincerely call it “critically acclaimed” and I concur that at least from the perspective of the first episode, it was well written. And aside from the obvious, and at times horrifically out-of-sync lip syncing during the singing parts that took away from the value of the songs themselves, the show was superbly acted. With only 40-something minutes to work with, the writers did well in presenting complex characters and scenarios, though there were a few of those moments that gave you that dirty, gossipy feel that TV will when they were presenting the numerous love triangles that then intertwine with each other to the point where even Isosceles would be asking for a breather.

In a series that could have been potentially filled with cliche characters, the only obvious one so far is the young, up-and-coming starlet Hayden Panettiere whose hitting on anything with an outie to get ahead. But I understand, this is drama and you need your villains. You don’t keep the masses engaged with subtly.

Judging the Nashville premier episode solely based on its entertainment value as a television show, I would give it a solid 1 1/2 of 2 guns up.

As for the musical impact, I would say that at this point, this is the thing the least to be determined so far, and that it may take months to gauge what a plus or minus Nashville might have on the sonic world. It was cool to see Del McCoury get a cameo and to hear the tail of a Tammy Wynette song being played in prime time. At the same time, all of this stuff is being portrayed as the old, “has-been” music that is fighting for its life against the young blood looking to steal the spotlight in Nashville.

And though one of the story lines in Nashville is the cronyism that permeates the city, cronyism is exactly what is making the music in this series purr. The show’s music producer is T Bone Burnett, who is the husband of the show’s executive producer Callie Khouri. In the first episode, a song clearly picked from The Civil Wars was showcased, and Burnett has said he wants to work with people he’s worked with before on the show, like The Civil Wars, Lucinda Williams and others. Scott Borchetta’s Big Machine label is exclusively distributing the music showcased on the show, and Gaylord Entertainment, now Ryman Hospitality is one of the big money entities behind the series.

And this gets me to the icky feeling that I have about this whole thing. Nashville smacks of the same type of tactic used by Music Row’s major labels to re-integrate and monetize anti-Nashville sentiment through “new Outlaws.” Instead of trying to tackle and resolve the issues facing the country music industry–like how to deal with aging talent, the intrusion of industry into the creative process, the use of Auto-tune, and the all-too-common practice of kinky sex being used to evaluate music instead of the music’s creative value–they are using these negative aspects present in mainstream country music as dramatic fodder, with the backdrop being many of Nashville’s historic institutions like The Grand Ole Opry, The Ryman Auditorium, and the Bluebird Cafe.

Is it compelling? Sure. Is it right? Of course not. Will it result in either the increased exposure of good music as T Bone Burnett hopes, or the greater awareness of the issues plaguing mainstream country? Well have to see. But I remain skeptical. I would rather see Nashville attempt to fix their problems as opposed to try and make money off the drama they create. But of course, that doesn’t make for compelling television.

A lot is still to be determined about Nashville, but I continue to believe the show’s impact could be massive in one direction or another. So I will be fighting through lip-syncing, bad love scenes, and general modern television bullshit to keep a close eye.