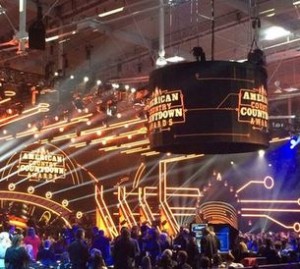 Monday night (12-15) was the inaugural airing of what is attempting to be country music’s 4th awards show called the American Country Countdown Awards, or ACCA’s, and the ratings couldn’t have been worse. Replacing the American Country Awards on FOX which ran for three years, the ACCA’s are an extension of Cumulus Media’s American Country Countdown program, a weekly syndicated radio show hosted by Kix Brooks. Hoping to put more muscle behind the production, Cumulus and FOX also brought in giant awards show apparatus Dick Clark Productions—the company behind the ACM Awards and other live broadcasts. However DCP and a big media push prior to the awards couldn’t account for an overcrowded awards show space and a lackluster presentation, and the overnight ratings for the show were abysmal.

Ratings for the FOX-aired show came in at 0.9/ 3, good for last amongst all major networks, and down an embarrassing 21% compared to last year’s ratings on the same night. The show pulled roughly 3.48 million viewers during the two-hour presentation. Compare this with 2013’s American Country Awards numbers, which aired on a Tuesday (Dec. 10th) and were already considered deplorable, the awards show shed over 1.6 million viewers, or roughly 33% of its viewership year to year. The overnight ratings for last year’s show were 1.4/4.

Thanks to Windmills Country for help running down the numbers.

The 2014 American Country Countdown Awards exposed hosts Florida Georgia Line as having little to no skills in timing or pentameter. At one point the presentation came out of commercial break, showed FGL’s Tyler Hubbard standing on the stage with a large camouflage duffel bag slung over his shoulder. FGL member Brian Kelly said to Hubbard, “Hey Tyler, I have to say you have a large sack.” Hubbard responded, “Yeah, it’s nuts.” And that was the extent of their joke.

With the resounding success of other country awards shows such as the long-running CMA Awards every November, and the ACM Awards in April, FOX, Cumulus, and Dick Clark Productions may keep at their task to launch a 4th franchise (the 3rd being the summer’s CMT Awards), but so far over a four-year span, the experiment has not fared well whatsoever.