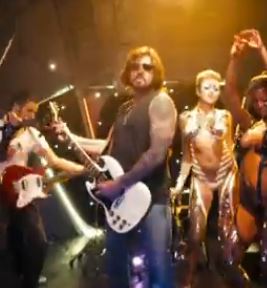 On February 11th, Billy Ray Cyrus and rapper Buck 22 released a hip-hop version of Billy Ray’s long-lampooned country hit “Achy Breaky Heart” accompanied by a video complete with twerking space aliens and an introduction by Larry King of all people. Whether the point was to be purposefully-stupid and trashy to get people’s attention or not, that was the general result, and the video has received nearly 7.5 million hits and counting since its release.

“Achy Breaky 2” allows us once again to face the new music dilemma of whether a song is successful despite being bad, or because of it, and what this could mean for the future of music. In October of 2012 when Billboard modernized their chart rules, concerns were raised that including certain aspects of new media into the chart mix might make gauging the intent of listeners difficult. This was the question asked when the Brad Paisley / LL Cool J collaboration “Accidental Racist” appeared on Billboard’s country charts in the wake of an embrolio about the song in the media, including the lampooning of the track in skits by Saturday Night Live and by Stephen Colbert. Even though the song was never released as a single, the curiosity and car crash factor led to a successful chart performance, outperforming Paisley’s current single at the time.

Troubled about where this trend might lead, Saving Country Music pointed out,

One problem with Billboard’s new system, and many digital metrics we use to gauge popularity these days, is their ability to measure intent….People seeking to hear [“Accidental Racist’] for themselves downloaded it, or took to their music subscription service of choice to see what all the fuss was about, driving the metrics of the song up for the wrong reasons. Along with the trappings this paradigm presents currently, the next question is will there be artists who create songs simply because they know they will be either controversial or considered bad?

That concern was taken one step further when in February of 2013, Billboard changed their rules again to reflect YouTube data. This later rule is what has specifically allowed “Achy Breaky 2” to register on multiple Billboard charts, without selling a significant amount of downloads, and without receiving any sizable radio play. “Accidental Racist” wasn’t accompanied by a video, and wasn’t released purposely to be lampooned and draw attention to itself; it was simply an album cut that became the subject of interest and ridicule naturally.

Because of the amount of YouTube views “Achy Breaky 2″ achieved, the song debuted at #11 on Billboard’s Hot Rap songs chart, and #16 on the Streaming Songs chart. But is this a fair chart assessment for a song that the majority of listeners/viewers consumed simply to point and laugh at it?”

As Saving Country Music said at the time of Billboard’s YouTube rule change,

What Billboard’s YouTube data does not consider is quality, and the curiosity factor. Whereas songs on the radio, or songs that people purchase are being consumed because the public has deemed them appealing, music on YouTube can sometimes go viral for how bad or polarizing or offensive it is. Take for example Rebecca Black’s “Friday.” The song would have rocketed to #1 on the charts under this rule, yet the majority of the viewers of the video drew an unfavorable reaction to it. It was the car wreck factor that forced the song viral. This means that songs could chart because the public vehemently hates them instead of liking them.

And this is exactly what has happened with “Achy Breaky 2”, resulting in the edging out more relevant and appealing material on the charts.

How do we know “Achy Breaky 2” was bolstered by curiosity and dislike? Because just like Rebecca Black’s “Friday,” the favorable to unfavorable ratio on YouTube’s rating feature shows that by an almost 3 to 1 margin, viewers of “Achy Breaky 2” do not like the video.

Billboard editor Bill Werde has addressed this issue before, saying that he sees how this could be a problem, but none of Billboard’s protocols prevented “Achy Breaky 2” from charting. Could the reporting for Billboard’s charts from YouTube include a caveat based on YouTube’s like and dislike feature to filter out songs that clearly are not meeting the approval of watchers or listeners, or is this a slippery slope itself where music would begin to be judged on taste instead of impact by lay listeners?

But this isn’t where the controversy for “Achy Breaky 2” ends. Similar to how many country music fans have been angered by Billboard’s new chart rules and how they benefit artists that have “crossover” or pop appeal by including plays in pop radio for artists originating in country, so to has rap seen an infiltration of its charts by outside forces, effecting the autonomy of the genre and aiding the formation of a mono-genre. Though Billy Ray Cyrus is a country star and “Achy Breaky 2” is based off a country song, it was the rap charts that were forced to claim it, causing quite a clamor in the rap community.

Sean Fennessey writing for Grantland calls the song symptomatic of rap being pulled down by influences from outside the genre. Does this sound familiar country music fans?

But “Achy Breaky 2” was successful because it was a novelty song, bolstered by the new protocols governing Billboard’s charts that can’t measure intent. And if either the song, the collaboration, the video, or all of them were purposely made to be awful to take advantage of the viral curiosity they forecasted would ensue and the favorable metric environment that allowed it to be recognized on industry-leading charts, who’s to say it won’t happen again, or become prevalent or common in the music marketplace?

On second thought, “Achy Breaky 2” could be more than a novelty song. Much more. It could be the first song that was successful for being bad, and recognized by the industry for it.