After 55 Years, The Louisiana Hayride Is Coming Back 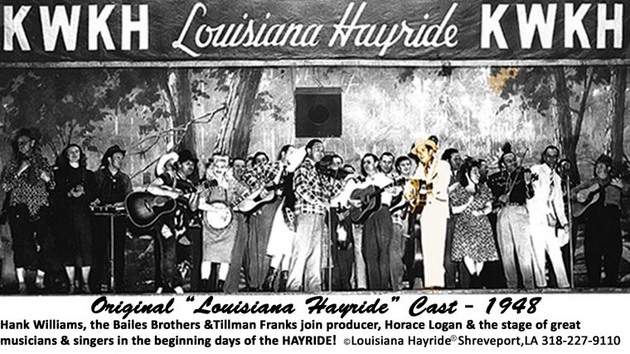 The Louisiana Hayride is on its way back, and in a big way. Arguably the 2nd most iconic and influential music program in country music history, only rivaled in stature by The Grand Ole Opry, it’s been an effort that has lasted over 20 years and seen a major renovation of the radio program’s original home of The Municipal Auditorium in Shreveport, Louisiana that has put organizers on the brink of bringing the show back to the airwaves after being shuttered for over 55 years.

It’s where Elvis Presley got his start. It was a home for Hank Williams when the Grand Ole Opry admonished him. And no other stage in American music saw the type of talent from not just country, but many forms of American music blossom on its stage.

On Saturday, April 11th, a press conference was held in Shreveport where Louisiana Lt. Governor Jay D’Ardenne, the mayors of both Shreveport and Bossier City, and other organizers and supporters including Billy Bob Thornton gathered to explain their plans for bringing the iconic music institution back.

At the very heart of returning the Louisiana Hayride to its previous prominence has been the head of the Louisiana Hayride Foundation, Maggie Warwick. Known to dedicated classic country music fans as songwriter and performer Margret Lewis who penned “Reconsider Me” and many songs for Jeannie C. Riley, she performed on the Louisiana Hayride when it was still active, becoming a member in 1958, and has worked tirelessly for many years to bring the program back. But first organizers had to save the original home of the Louisiana Hayride, the Shreveport Municipal Auditorium, know affectionately to some locals as “The Muni.”

“Well that’s our story. My husband and I, that’s when we started getting involved in the late 80’s,” Maggie Warwick explains to Saving Country Music from Shreveport. “The city had made plans to tear the Municipal Auditorium down. So we intervened in that. My husband did governmental relations for the company he worked for, and he knew a lot of the politicians in Baton Rouge. So he made some phone calls and they got on board, and it was actually the State of Louisiana and our representatives from Shreveport and Bossier region that were able to raise the money to save the building. And we helped in that process all the way through.”

With the historic auditorium preserved, the next step was bringing back the Louisiana Hayride itself, but that would take Maggie Warwick and her husband Alton Warwick many years of legal wrangling.

“We started doing research, started looking into the legal side of it. There was no one that had any legal right to [the name]. It had gone into public domain from the years that had gone by since KWKH had closed it. So we began the process to get all the legalities out of the way, which took way longer than we thought, and much conflict, false claims, people coming out of the bushes. So we had to clear all of the crooks out of the way, and that took us a lot of years. Then we had to deal with political issues here in Shreveport.”

“The people who knew each other from the Hayride, we all became lifelong friends. So unfortunately when it was closed down by KWKH, there was a mass exodus out of Shreveport moving to Nashville to get on the Grand Ole Opry. It was a real loss to Shreveport and its cultural quality of life that they had here. It’s become a quest my husband and I tackled years ago at the request of Tillman Franks and Merle Kilgore. One day they came to us when Merle was in town and we all went to lunch. They said, ‘Maggie, you and Alton have to do something to save our music.’ Tillman said, ‘I’m too old, I can’t do it.’ We didn’t know what to say. It was the last thing on our minds, but it became our mission to save the Louisiana Hayride.”

The Louisiana Hayride, which began in 1948 on KWKH, differed from The Grand Ole Opry by allowing young, non-established stars take the stage. This led to the institution launching some artists that otherwise may have never had a chance without the opportunity the show presented. As a performer on the show, Maggie Warwick saw first hand the effects the Louisiana Hayride had on American music.

“It was unrestricted. So many of the great stars that were not accepted on other shows when they first started out were totally embraced by the Louisiana Hayride like Hank and Elvis and Johnny Cash, and all of those artists Sam Phillips cut on Sun Records. And before that, Webb Pierce, Faron Young, Jim Reeves, Tex Ritter, and even Bob Wills played the Hayride many times. The Louisiana Hayride discovered and opened the door to more great stars than any other show of its kind in history. All the styles of music, from the roots music, it all evolved at the Louisiana Hayride. Nobody made them play a certain way. Everyone was free to play the way they wanted. I really credit the producer Horace Logan for that because he encouraged originality, and Tillman [Franks] did too from these young artists in their day. It was a critical part of the evolution of American music. If we had not had the show, I don’t know what would have happened with the styles of music because it influenced them so much. It was an evolution of not just country music, but every style of music was played on the Hayride. It started with country, and then went to the country blues, rockabilly, and rock and roll started at the Hayride too.”

But the organizers insist that the new incarnation of the show won’t simply be a re-enactment or a period piece. Nor will it be turned over to some of today’s country artists who may not symbolize the spirit of what the Louisiana Hayride was all about. They also hope to bring the program back to its previous prominence, and they believe they have the support to do so.

“We want to re-open the show in a real professional manner for television,” says Maggie Warwick. “The Lt. Governor’s office, the new mayor of Shreveport who just took office in January, and the mayor of Bossier City are all supporting this. So we’ve got all the political leadership aligned so we could relaunch it. Joel Katz is our attorney. He represents Willie Nelson, George Strait, The Grammys, the CMA, and he’s done a lot of television negotiations for the CMA and others, so he’s the one that’s working with us to get the deals with a broadcaster. He’s in the process of that right now. We’re also working to get the right producers to produce the show, and we’re recruiting all of that as we speak in pre-production with hoping that September will be a good month to launch it because that’s Hank Williams’ birthday month. We’re shooting for a weekly show. We want to do a TV special first to kick it off, and then follow that with a weekly show.”

Maggie Warwick, originally from Snyder, TX, was first brought to Louisiana at the age of 15 from West Texas by Johnny Horton and Tillman Franks. Tillman was Johnny Horton’s manager at the time. The memories of the music, the camaraderie between the performers, and wanting to rekindle that magic in a modern form is finally paying off after going on three decades of legal wrangling, planning, preparation, and restoration. There’s also plans to open a museum where many of the artifacts and memories from the show can be displayed and preserved.

“At last we have come to a place in time where it has all come together. We want it to be a wide open door where artists of all ages can come and perform.”