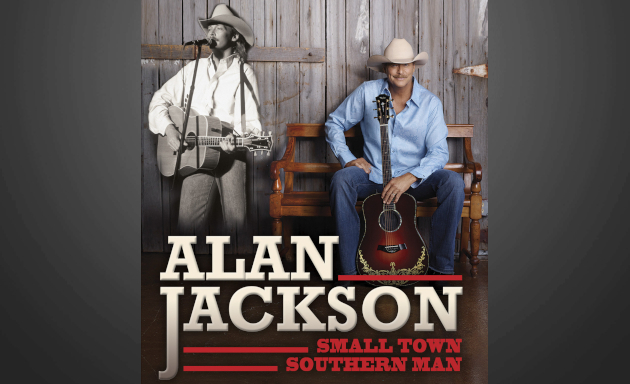 Completely unexpected, but absolutely welcome, Country Music Hall of Famer Alan Jackson is the beneficiary of a brand new documentary called Small Town Southern Man that has just been released via multiple streaming services (iTunes, Amazon Prime, etc.), and will receive a DVD release on June 28th. Originally aired briefly on AXS TV in October of 2018, and also made available to fan club members, the film has now received a wide digital release via Eagle Rock Entertainment.

Named for Alan Jackson’s 2007 #1 hit, Small Town Southern Man is an 89-minute, feature-length documentary filled with interviews, archive footage, and reams of information about Alan Jackson’s life. The documentary starts with Jackson’s humble beginnings in his hometown of Newnan, Georgia, growing up poor with four older sisters, clawing his way to a record deal, finding huge success in the early 90’s, enjoying a career resurgence in the early 2000’s, all the way to being inducted to the Country Music Hall of Fame in 2017 by Loretta Lynn, with almost the entirety of Jackson’s induction ceremony included in the film, including his famous speech about the importance of country music.

Along with many of the behind-the-scenes people critical to Alan Jackson’s career, performers Alison Krauss, Easton Corbin, Lee Ann Womack, and Carrie Underwood also speak on Alan Jackson’s behalf. Though Alan Jackson does not participate in the documentary directly, tons of archive footage from his career follow the chronology as he goes from Georgia hayseed to Hall of Famer, with concert footage from Red Rocks in Colorado, to the Ryman Auditorium in Nashville also included.

Alan Jackson was born in Newnan, Georgia in 1958, and grew up on Gospel and the music of artists such as Gene Watson and John Anderson. At the age of 27, he moved with his wife to Nashville to pursue music as a career. In a classic story of climbing the country music ladder, Jackson’s career started as a mail boy in the offices of TNN. Glen Campbell helped get Jackson’s singing career started, and by 1989 he was signed to Arista Nashville. He went on to sell an astounding 60 million records worldwide, record thirty-five #1 hits, fifty Top 10 hits, earn two Grammy Awards, and 16 Country Music Association Awards including Entertainer of the Year in 1995, 2002, and 2003.

If you’re a fan of good country music or Alan Jackson, Small Town Southern Man is definitely worth investing an hour-and-a-half in. The film can be purchased here.