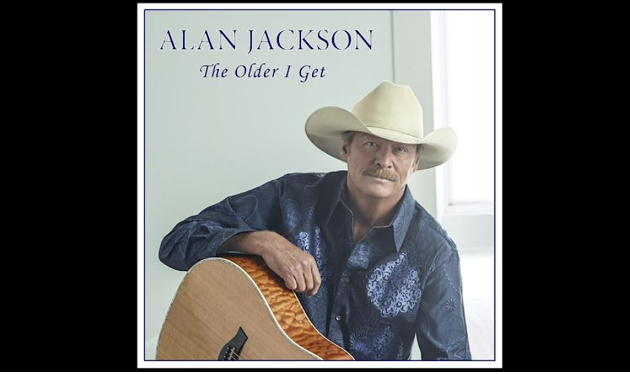 On Sunday, October 22nd, 2017, Alan Jackson will officially take his rightful place in the Country Music Hall of Fame right beside all the other greats of country music, and his fellow 2017 inductees of Jerry Reed and songwriter Don Schlitz. And ahead of the private medallion ceremony for fellow inductees and distinguished guests in Nashville, Jackson has released the first taste from a new, upcoming album in the form of a song called “The Older I Get.”

At a time when Alan Jackson and country music are reflecting back on his career, it’s no surprise that a new song would find Alan Jackson in a contemplative, appreciative mood. “I don’t mind all the lines from all the times I’ve laughed and cried,” Jackson sings. Though Jackson is known as one of the few more modern superstars to write a majority of his own material, “The Older I Get” was actually penned by Adam Wright, Hailey Whitters and Sarah Allison Turner.

“This song reflects a lot of how I feel these days,” Alan Jackson says. “It’s a good song; I really liked it, but the message was a little different when I first heard it. I thought maybe it could be a little more positive about being older and wiser and more content…so they rewrote a few things, and this is how it ended up.”

Alan Jackson’s last album Angels & Alcohol ended up at #1 on the Billboard Country Albums chart, as well as Top 5 all genre. There is no word on when the new Alan Jackson album might be delivered or what the name of it will be at the moment, but it has been confirmed that Jackson will be making a big appearance at the 2017 CMA Awards on November 8th.

“The Older I Get” is currently available for download and streaming through all major services.