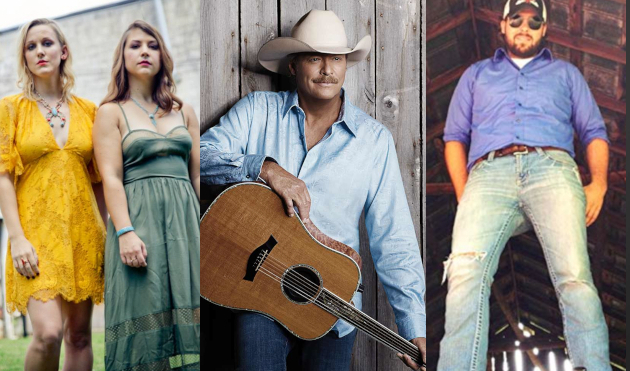 If you needed any more confirmation of just how cool Alan Jackson is, for the second year in a row he’s chosen the openers for his upcoming tour not out of the mostly paltry class of up-and-coming major label talent looking for attention. Instead, he’s turned to Lower Broadway in Nashville, and the stage of his own AJ’s Good Time Bar where on a nightly basis you can see the newer and lesser-known acts in Nashville that actually sound country and uphold the standards of quality songwriting in their music.

Sara Zebley and Hayley Prosser of The Steel Blossoms are two former elementary school teachers who met in Pennsylvania while playing in separate projects. Immediately noticing a musical kinship between each other, the Steel Blossoms were formed, eventually relocating to Nashville and spending ample time developing their songs and sound on the road and house concerts. Evoking the timeless sorcery of two-part harmonies, and penning songs that put this gift to good use, they’ve been haunting lower Broadway for a while now, and will now get to test their music in front of arena crowds.

From a small town in Iowa where he was raised on a large beef farm, Cory Farley was first drawn to country music from hearing the old classic tunes playing on his grandfather’s radio. He started his career while living in Phoenix and attending school, and moved to Nashville in 2010 to pursue country music full time. Since then he’s become a staple of lower Broadway, playing AJ’s Good Time Bar and The Second Fiddle on a nightly basis with his band.

Carolina Pine is a classic country duo that includes Kennedy Fitzsimmons from North Carolina, and Illinois native Woody James. They moved to Nashville separately, eventually crossing paths while playing a gig together and decided to form a duo. They cite their influences as George Jones, Emmylou Harris, Daryle Singletary, Allison Krauss, and Merle Haggard. They released a couple of singles in 2019, and hope to release an album soon.

(Note: The Alan Jackson camp says more dates are on the way. Also, two dates in August have been added with TBA venues, with the two previously-announced August concerts being pushed later.)