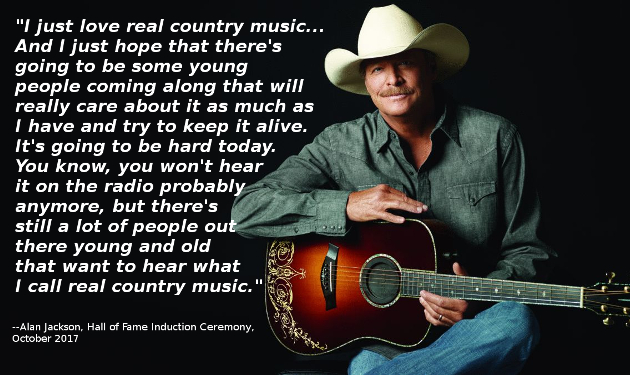 The legendary and Hall of Fame country music career of Alan Jackson has been marked by two underlying things: his ability to write and sing songs that stay true to country’s roots and ultimately become mega-hits (he had 26 #1’s overall), and his propensity to step up at critical moments and say or do whatever he can to help preserve the integrity and history of the genre.

Just as much as Alan Jackson is known for songs like “Don’t Rock the Jukebox,” “Livin’ on Love,” and “Where Were You (When The World Stopped Turning),” he’s also known for the 1994 ACM Awards episode where he instructed his drummer to play without sticks when producers insisted his band mimic playing to a backing track, the 1999 CMA Awards where Jackson notoriously stopped down his rendition of “Pop A Top” to break into George Jones’ “Choices” after the producers told Jones he couldn’t play a full version of the song, or the time in 2016 when Jackson left the audience when Beyoncé came out to perform.

Some wondered if these legendary protestations were the reason Alan Jackson had to wait a few years after officially becoming eligible before he was inducted into the Country Music Hall of Fame. After all, with 80 million records sold, and three CMA Entertainer of the Year awards, Jackson should have been a shoo-in. But in 2017 it finally happened. And at the private induction ceremony held on October 28, 2017, Alan Jackson was asked to speak, along with all of the other inductees. And like he’s done so many times over his legendary career, Alan Jackson spoke his mind.

Perhaps it’s because unlike the Rock n’ Roll Hall of Fame inductions, the Country Hall of Fame Medallion ceremony is very exclusive, and very private. Perhaps it was because the room was partly full of industry who really didn’t want Jackson’s words to be re-broadcast. Or many it’s because Jackson’s moment was overshadowed by the re-emergence of Loretta Lynn, who after suffering a stroke earlier in in 2017, showed up to the ceremony in her first public appearance in months to help honor Alan Jackson.

But there is a part of Alan Jackson’s acceptance speech that has gone virtually unnoticed, and definitely bears repeating. Though perhaps not as bold and overt as switching songs in the middle of an awards show performance or walking out on another artist, it shows how Alan Jackson never shies away from speaking his mind, or standing up for what he believes in, no matter what the forum or the reverence that surrounds it.

“I just love real country music,” Jackson said from the Hall of Fame podium. “And George Jones, he told me that the first time I met him. [He said] ‘Keep it country’ and that stuck with me. And I would have done it anyway, but it just meant so much coming from him. And I just hope that there’s going to be some young people coming along that will really care about it as much as I have and try to keep it alive. It’s going to be hard today. You know, you won’t hear it on the radio probably anymore, but there’s still a lot of people out there young and old that want to hear what I call real country music.”

You could tell by the way Alan Jackson said these words (they can be seen in the video below at the 2:12 mark), he was doing his level best to choke back not just tears, but push back anger in his heart for what country music has become today, yet was doing his best to not make a scene given the circumstances. But he said all that needed to be, and maybe by carefully choosing his words, and the delivery, it was able to have a greater effect.

One thing’s for sure, the round of applause Alan Jackson received shows that many in attendance were in agreement with him. And when you talk to country music fans and hear how many say they hate much of the new stuff and wish the older stuff would return, it’s not hard to fathom that there is just as many, if not more fans of country music who would love to see the music return to its roots as opposed to keep on its current path.

But for that to occur, it’s going to take artists, fans, and members of the industry—including some, if not many who heard Jackson’s words in that distinguished audience at the Hall of Fame and applauded loudly—to do like Jackson has done throughout his career, which is put their foot down, and stand up for the preservation and continuance of true country music.