Putting one’s personal story into song is the timeless way to deliver music with resonance and lasting impact irrespective of whatever trends are hip in popular music, or whatever current events are roiling the world. That is what legacy Americana singer and songwriter Allison Moorer has done with her latest record, Blood. The inspiration for this record was so personal, it was paired with a memoir of her life of the same name, and select tour dates have featured Allison both performing the music, and talking about the book with crowds and guest moderators.

Americana music and many of it’s proprietors are having a mood in 2019. Compelled to speak about the current social climate, and swept up in this fashionable notion of not wanting to be hemmed in by genre has resulted in a few really compelling projects, and many records that felt bogged down in process and intent as opposed to just letting inspiration take control and compiling quality songs and recordings. Allison Moorer bucks this trend on Blood by simply putting pen to paper and letting the mood of the music choose its own direction, not overthinking the process and trying to reinvent the wheel, and delivering a record that reverberates no matter your tastes or ideological leanings, separating itself from the very cluttered Americana congregation.

Not everyone’s life story would make for such an engrossing read or listen, but Allison Moorer’s certainly does. Born and raised in Southern Alabama, her parents were killed in a murder suicide in 1986. To say Allison and her sister and fellow performer Shelby Lynne grew up in a troubled household feels almost like an indignity to the severity of their situation. So when Moorer sings a song like “Cold Cold Earth” that could be mistaken for a Hank Williams murder ballad if it weren’t ripped from Allison’s personal narrative, it means more crossing over her lips. 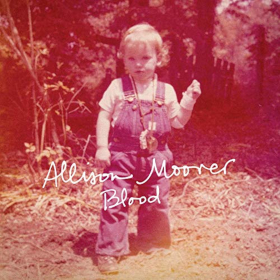 This isn’t mimicry or cosplay. This is raw and honest stories and emotions, set to music that in most instances is intimate and acoustic, but is also willing to call upon soul and Heartland rock influences now often included under the umbrella of Americana. You don’t hear this record, you listen, and are rewarded with little lessons from someone with the authority to teach them. Blood is not just a biographical account, it’s about how to move on and heal from the harrowing and sometimes unjust experiences in one’s life, and do it not just by auditory expression to unburden yourself, but through admitting your own mistakes and frailties as opposed to making excuses for them.

Ten years after the passing of her parents, Moorer followed her sister Shelby Lynne to Nashville, and while playing a tribute show at the Ryman Auditorium, was discovered by famed producer Tony Brown, best known for his work with Reba McEntire and George Strait, eventually signing Moorer to MCA Nashville. But like so many of the founding mothers and fathers of Americana music, Moorer’s songs were too deep, and too touching to find favor in the commercial enclaves of Music City, and she eventually ended up on Sugar Hill and now Thirty Tigers.

Allison Moorer’s name may not be as well known as someone like Lucinda Williams, but her life and career are as intertwined with the legacy of Americana as anyone’s. Along with her work with sister Shelby, she was the better half of Steve Earle for a while, and is now playing house with Hayes Carll, who is one of those few Americana names in 2019 who figured out how to navigate this unsteady time in American society successfully in his record What It Is.

But Allison Moorer is the one turning in a late career effort that feels incredibly fresh, sharp, fierce, and defining, despite the limited scope of much of the production, and the title song first appearing on her 2015 record Down To Believing. Officially, this record is a companion to her memoir, not vice versa. So perhaps consuming the record along with the written work would make up for a certain thinness in the arrangement that renders some moments a little hard to remain attentive to. But even standing alone, Blood feels like a stellar work of songwriting worthy of receiving your attention.