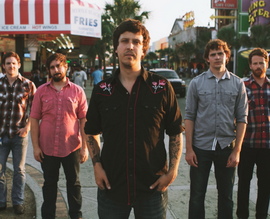 Right now there’s a gaggle of Southern rock bands that are tapping into some serious, serious songwriting manna, and that includes this offering from North Carolina’s American Aquarium combining cutting poeticism with primal rock sounds. With such a cerebral void in mainstream country today, with country’s next generation of male performers spewing laundry list pap similar to how the water buffalo marks its territory by spinning its tail and shooting scat out of its hind quarters, it has fallen to Southern rock bands among others to release songs with country sensibilities that still include songwriting substance.

Burn. Flicker. Die accosts this very cultural divide in the song “St. Mary’s”, sporting the line, “Where American girls drink Mexican beer, and city boys sing small town hymns.” There’s a slew of those stellar lines on Burn.Flicker.Die that can be culled out of context and still be cutting; more of them than possibly on any album I’ve heard this year. American Aquarium bull rushes you with substance from the very beginning.

It was produced by former Drive By Trucker turned solo artist Jason Isbell, and deserves high praise for capturing the sweat and frustration of a band on their 6th album still stuck in a van, even though they seem to be surrounded by tremendous loyalty and critical praise. These songs are tributes to American decay, depravity, excess, and unfairness, with starkly honest lyrics not dulled one bit by subtly, or sullied by the need for explanation or imagination. Burn. Flicker. Die is not an artistic interpretation of American Aquarium’s struggles, it is a Polaroid. 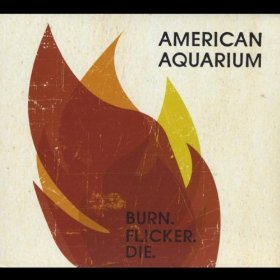 You’re supposed to listen to songs, and feel music. With American Aquarium, you do both. It’s balls out head banging, and depth-driven balladry all in one. It’s classic, Southern rock at its core, but the country elements come out strong in spots, like the fiddle intro to “Lonely Ain’t Easy”; a song that at its heart is country in its lyrical structure. The album is set in the South, from the “Cape Fear River” opener, to “Jacksonville”, to the themes of breaking out of the small town rut only to fall in to the shallowness of cities and substance abuse. “Burn. Flicker. Die” is an analogy to neon–a staple of rural America–and how the life of those signs that set the ambiance for bar rooms in multitudes of forgotten locales mimic the life of a traveling band as they’re touching 30 and getting tired of the grind.

These songs are the brain child of Bradley Barham who sports a Southern accent as rich as a sundae. Instrumentation isn’t stellar, but it fits the dirty vibe of the songs, and they will surprise you at times with their attention to composition, like the jam on the end of the otherwise average “Jacksonville” that ends abruptly. They have that mid 70’s Rolling Stones “Hear the music through the sweat” thing going on strong.

Burn.Flicker.Die does deteriorate somewhat as you go along. The chorus payoff on the song “Casualties” is a little corny. “I’m just a casualty of rock and roll,” seems more appropriate for a spandexed singer to serenade a stadium full of girls with perms and scrunchies with who are trying not to burn their finger’s as the wave their boyfriend’s Bic back and forth. There’s no payoff, moral, or resolution to the Burn.Flicker.Die concept at the end. No steadfast statement about continuing on, getting clean, doing things different. Just more songs about the drug and booze-infused rock and roll road life.

American Aquarium is one of these bands that you sit back and listen to and shake you head about why they aren’t bigger. At the same time an excellent album like this is a product of that dilemma. There’s nothing keeping them from gaining wider appeal than more attention, and more attention is what they deserve.

You can listen to the complete album on their website or on MySpace.