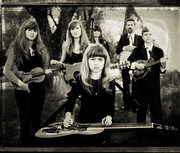 One of my hard and fast music theories is that there’s too much new music being pumped into the modern consciousness these days. Too many folks are getting into music for all the wrong reasons, looking for national attention, flooding the marketplace, diluting attention from the artists and projects that deserve it. So on face value, you may look at live album from a bluegrass band consisting of all covers and traditionals and ask, “Why”?

Add on top of that, the bluegrass discipline itself seems so glutted in the post O Brother Where Art Thou landscape. You can have a bluegrass picker who is at the absolute top of the mountain in regards to technique, and where this used to land him or her in a top-tier nationally-touring bluegrass outfit, the market is so flooded with these folks now they are almost commonplace at any local or regional bluegrass festival.

What makes The Anderson Family Band cut through the din of bluegrass parody beyond the stellar musicianship and the novelty of that musicianship being displayed through youth, is their unique approach that embodies a very wise understanding of the roots of bluegrass. Bluegrass didn’t grow out of boredom, it grew out of necessity. The old timers who formed the modes and pentameters of this music weren’t searching for an elective in their lives, they were fighting to stay alive through the uplifting spirit of music. No different than food, water, raiment, and shelter, it was essential to their existence and identity.

Furthermore, it was from this essential nature of the music that the tradition of the family band was formed, and music made by families is at the very root of country and bluegrass. It may be easy to look at this band and imagine mom and dad cracking a whip over the kiddos to become maestros of their instruments or there’s no dessert that night. But all true bluegrass players don’t play music because they want to, they play it because they have to. It is ingrained in them since birth. Before TV and internet and i-somethings chirping at us incessantly, if you wanted to hear or make music, you had to enlist the family, because they were the only other people around. 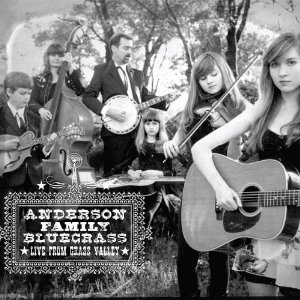 There is a tremendous amount of soul and inspiration that can be gleaned from watching a family band form. Regardless of the goals or outcomes, whether these kids grow up to be big in music or use their experiences as a resume point in the business world, they will have the bonds and experiences in their family band to make them stronger people first, and that is something we can all be inspired by, if not outright jealous of.

And The Anderson Family Band is not just a robotic, generic bluegrass band. What I like about them is they have their own unique style; the band as a whole and each individual player. They have darkness to their music. Most of their songs have somber themes and employ dark chords and structures. They dress in black, and on the cover and inset of this CD, there’s not one smile among them. This helps breed the serious nature of their approach, which refreshingly doesn’t seem to want to tackle the world, but instead give friends and neighbors the gift of music, which again, was the focus of bluegrass at it’s roots, and in my opinion, the reason Live From Grass Valley should be given national attention above many others.

Their take on traditional bluegrass is engaging. The contrast between the many-times dark-themed songs being sung by the soft voices of young girls really makes The Anderson Family intriguing to the ear. Instead of looking at a track list of familiar songs and rolling your eyes saying, “Why do I need to hear another version of that“, you get excited to hear the Anderson Family’s take. As with all young voices, you can tell in places that the singing tone is still in the development stage, but don’t mistake this with being off-key or bad. Their singing, just like their playing, is spot on.

I’m not going to mention the ages of the Anderson Family players, because in my opinion, it’s irrelevant. I don’t believe in age discrimination or preference in music, and from just listening to this album and seeing videos, the Anderson Family kids should be seen as peers of the adults in the bluegrass discipline. I do want you to pay special attention to Paige Anderson though, the oldest of the siblings. She fronts this family band, and individually embodies many of the things that excite me about The Anderson Family as a whole.

Watching Paige Anderson, I see passion. This helps validate a worry that some may have with a band like this, that the talent is all skin deep, and based on training and memory. And she’s a flat picker, meaning instead of using all her fingers to pick the guitar, she uses a single pick, and strikes each string individually, which allows the guitar to burst through better than finger picking. In bluegrass, the guitar is usually a rhythm instrument; there’s just too much other stuff going on for it to be featured. But when you have a flat picker of the caliber of Paige, it is what you build your bluegrass band around. Check this out:

Paige Anderson is one to keep an eye on. She’s a great singer with a confident stage presence, and she can play clawhammer banjo and mandolin as well. What I am interested to see now is if songwriting develops as one of her tools. Check out Paige performing solo at Hardly Strictly Bluegrass:

The Anderson Family Bluegrass Band from Grass Valley is an inspiration, and this live album recorded right in their hometown community is an excellent reminder and example of how strong family and community built through music can have such a greater impact on the soul and heart than just music itself.