You want to get the majority of country music critics singing your praises? Put out a traditional country album through mainstream channels. Most critics got into the business because of a passion for true country, and after having their ears burned out by the latest singles from Florida-Georgia Line and Luke Bryan, anything with the most minute measure of twang will get the Nashville press corps reaching for their Thesauruses to shower you with plaudits. Meanwhile down here in the independent trenches where twang is a given, you’ve got to have a little more than just the right sound. The music and words must still ring true. Luckily with Ashley Monroe, they do.

First, kudos are probably warranted for Miranda Lambert. Whatever one’s feelings might be on her, for a solid top 3 lady in country music to take on a side project like The Pistol Annies speaks to her passion for the music, and specifically the music of fellow Pistol Annie Ashley Monroe. Ashley still may have made this record without the Pistol Annies bump, but there may have not been nearly as many people paying attention to it. And kudos to Ashley for staying within herself on Like A Rose. She could have taken her Pistol Annies exposure and cashed out with a career in country pop. 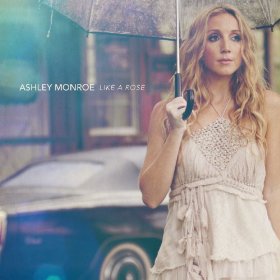 Like A Rose is a short and sweet, classic country album that encapsulates Ashley Monroe’s skills as a formidable traditional country songwriter with a sweet voice embellished with sincere pain. All the songs on Like A Rose were written by Monroe, but they all include collaborators as well, most notably Vince Gill who is also the executive producer of the album, and Guy Clark who co-writes the album’s namesake track, “Like A Rose.” This album speaks to a rough and troubled life, with some of the songs taken verbatim from Ashley’s past. The sincerity of her music is palpable. The very first lyric on the album, “I was only 13, when daddy died,” parallels Ashley’s real life experience, and however much fiction plays into the material for the rest of the album, you tend to believe every word.

The approach to Like A Rose is traditional, but light in the way the rhythm is laid back and some of the textures are ambient, making it in some respects a cross between country and Americana, broadening the appeal of the record. By only including 9 tracks, each offering benefits from a potency of content. This album never tires. At the same time, as a songwriter dyed in the Music Row ink, (granted, in circles with a more of a traditional leaning) there is a formulaic feel beneath some of the songs that make you say, “I’ve heard this song before, just in a different way.” You get this feel from songs like “Used” and “Two Weeks Late.” The wild-eyed “Weed Instead Of Roses” once again reinforces the theory that country has finally picked up that marijuana is good music marketing and now the subject will permeate the genre.

Nonetheless, the wit of a song like “She’s Driving Me Out Of Your Mind” and the simple enjoyment of “Monroe Suede,” or really the simple enjoyment of all of these songs can’t be denied. Even the duet with Blake Shelton “You Ain’t Dolly (And You Ain’t Porter)” is pretty good. Blake may be a turd burglar, but nobody ever accused him of not being able to sing. His tone and cadence fits the classic style very well.

Where Like A Rose may be a little bit light on the deep substance for songwriting snobs, or short on the hard country sounds some classic/traditional fans enjoy, Ashley Monroe’s place as a Pistol Annie with a major label deal make the prospects of this music wetting the whistle of passive country music fans for a more authentic country sound are very promising. Male-driven pop country continues to get worse as every moment passes in country, but a promising crop of bold female artists continue to impress at every turn as they try to steer country in a more substantive direction. Ashley Monroe is at the very top of that crop of beautiful, bold, and talented women.