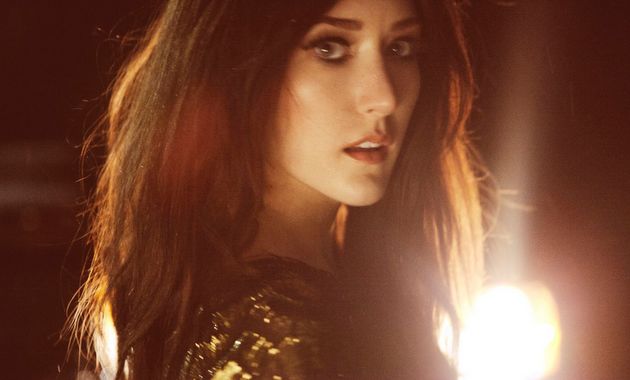 Watch out ladies and gentlemen because the female revolution overtaking country in the aftermath of tomato-gate is about to get some fresh and young reinforcements in the coming months with major debuts from some promising young artists, and first up to bat is the ravenesque and hungry Aubrie Sellers.

Aubrie starts off with a proven musical pedigree that’s nothing to smirk at. She’s the daughter of Lee Ann Womack and songwriter/performer Jason Sellers who were married between 1991 and 1997. Today Lee Ann Womack is married to well-known country studio man Frank Liddell, who steps in to produce Aubrie’s debut album called New City Blues. But Aubrie stands on her own two feet as a singer and signee to the songwriting house Carnival Music, who teams up with Thirty Tigers to release this new record.

Immediately out of the chute, you’re given fair warning this will not be a venture in the tame or ordinary. Serrated, braying guitars and pounding drums greet you at the gate of New City Blues, and only let up in the alternative, change-of-pace moments of this record. This is no sweet little girl looking to ride off of mommy and daddy’s name. Aubrie Sellers wants you to know she’s here, she’s ambitious, and she has more to offer than just sugar and spice.

That’s also the ultimate failing of New City Blues. This record tries too hard to say something, puts forth incredible effort to sound sloppy as if this is a form of creative expression or originality on its own, and the result is many songs where Aubrie and her writing are lost in a mix of discordant, ill-advised, inappropriate, and annoying instrumental bluster and overproduction.

One song after another I found myself screaming at my speakers for the guitar players to put their dicks back in their pants so I could hear Aubrie sing and what she was trying to say, while Gonzo on the drum set was doing his best rendition of the stage show STOMP, emphasized by the gratuitous echo and reverb bathing many of these tracks in rattletrap busyness until you felt like your head was in a pinball machine.

“I prefer to create friction,” Aubrie says in her bio. “Because if you’re not pushing buttons, you’re just making something pleasant, it’s probably been done before ”¦ and it’s not making anyone feel anything.” 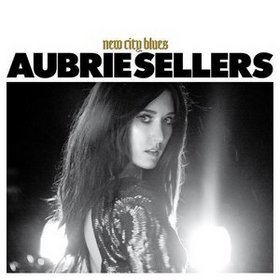 But nobody feels anything from tasteless wank-off guitar that takes no consideration of groove, taste, or tonality to create a desired mood. Nobody feels anything if they’re distracted from the words and sentiment of the song, which should always be the center of attention. It’s not even that Aubrie is buried in the mix. It’s that the rest of the musicians are so focused in on trying to steal your attention from her that you’re left with this muddy musical mess, and whatever the song was actually about gets relegated to an afterthought.

That’s pretty much the way most of New City Blues goes, but the songwriting is not anything extra special either except for moments here and there. Once again we have a lady singer who wants to break out of the mold of singing sweet and sentimental love songs, which in 2016 in country music, is about the most conformist thing you can do as a female.

Carrie Underwood, Miranda Lambert, Hailey Whitters who is also signed to Carnival Music, much of Kacey Musgraves material, and the new Brandy Clark single all fit this achingly narrow spectrum of song topics that just gets so incredibly tired one after the other. Everybody wants to be the anti nice girl and the anti blonde. There’s a song on New City Blues called “Liar Liar” co-written by Brandy Clark and Jessie Jo Dillon that sounds eerily like a Kacey Musgraves song, even down to the tone of Aubrie’s voice.

Aubrie actually does have some sweet songs and decent variety compared to some of the aforementioned names, but the songwriting doesn’t rise to anchor this project. The songwriting is fine. It’s the production that fails her, whether that’s the fault of Aubrie’s vision, or Frank Liddell calling the shots. And this isn’t just about country vs. rock and some jaded country music critic tired of hearing distortion in what is supposed to be country music. It’s never appropriate to just bang on a fretboard with absolutely no attention being paid to the melody or groove and pass it off as “art.” Nirvana’s Nevermid or your average Dead Kennedy’s record has way more precision and purpose behind the music than 2/3’rds of the songs on New City Blues.

And then the album has some really great moments, and lo and behold it’s when the belligerent production takes a sedative and Aubrie is allowed to just sing. The two best songs on the record are easily the dour and stripped back “Losing Ground,” and the ethereal and sweet “Humming Song.” Coming to this conclusion, and then checking the liner notes later, you then find that these were the two songs Aubrie wrote by herself. It’s shocking how common you find this in records from females these days. The fewer songwriters, the more a song shines, and the same goes for Kacey Musgraves, and Taylor Swift, and so many others.

“Humming Song” is where the production got it completely right, where it rose to meet the vibe dictated by the lyrics of the song. 14 tracks is probably too many for this record, but in one respect the extra songs were needed. Near the end of the album in songs like “Something Special,” “Loveless Rolling Stone,” and “Like The Rain,” the production begins to even out, and you feel like you’re listening to the songs as they were naturally intended to be—much preferred to a selection like “Dreaming of the Day,” which actually has pretty good writing and a great melody and chorus. But the production drowns out what makes it special by adding these ineffectual and superfluous noises that just disrupt the vibe and groove.

I don’t give a shit how long some guitar player can hold out a discordant sustain. Sure, that’s cool every once in a while, but to predicate the approach to an entire album on this is just rude to the ears. Some have been calling this “garage country.” That’s kind of an insult to the heart of a garage band because at least they’re trying. On New City Blues, these are expert players playing like shit on purpose. I want to hear Aubrie. I want to hear her voice, and her songs. That’s where everything should start. And anything that impinges upon that should have been cut out of the mix. Sellers performed for Colbert on the eve of this album’s release and she had three lead guitar players. She needs to go from three to one, and leave the pedal board for the remaining guitarist on the bus, hand him a piece a wood and some strings and pickups, and tell him that’s all he’s got to work with and to do his best.

As conscientious country music fans, we want to see these young female artists thrive, and at times I think we might be a little too willing to look the other way with poor outcomes. Instilling a semblance of balance between male and female artists in country music must be a two way street. To beat the boys, the girls need to be better than the boys, and you’re not better than anyone unless you’re being yourself. I just don’t buy that when Aubrie was writing these songs she envisioned 30-second beds of distortion ringing out in the center of them, burying the effort she put into crafting a lasting lyric and melody.

I was really excited about this album, and a few of the sane tracks are worth taking away from it and hoping for bright things for the future from Aubrie. But as a whole, New City Blues just feels too calculating. They’re trying too hard to say something instead of representing the music properly. It’s too inside the country music beltway where everyone is trying to make a big splash and too focused on writing by committee to represent what we know Aubrie Sellers is capable of.