Album Review – “Between The Moon & the Midwest” by Austin Lucas

“I’ve been told to walk away nearly every time I make an album.”

This is the abrupt, candid way Bloomington, Indiana-born singer songwriter Austin Lucas opens up his latest record Between The Moon & the Midwest. And it’s not entirely difficult to squint and see that as the fate that Austin has suffered from throughout his career. Most all of your favorite unsigned, small-time roots artists are beset with similar issues. Some eventually give it up, others continue to slag it out, but few will ever get to that dream of attaining at least enough of a semblance of “stardom” to the point where they can at least support themselves and a modest family life with their music.

Why does Jason Aldean get to become a millionaire and sell out arenas? Hell, why are even The Avett Brothers enjoying that fate, but a worthy artist like Austin Lucas is still booking house shows to help fill in the gaps of North American tours? It all seems so capricious, but with Austin Lucas, his fate feels a shade more inequitable and inconsiderate since he’s been so close to breaking through before, and has been extended opportunities many of his peers can only dream of.

Austin Lucas is like that minor league pitcher whose been called up to the big time enough where his fellow minor leaguers look at him with envy, but he’s never been able stay at the top level. He once toured the country in an outfit with Willie Nelson, and ended each show singing Gospel songs with Willie on stage. His previous record was released by New West, which is about as big league as it gets in Americana. And here he is again, regrouping, retooling, and trying to climb up that ladder once more, but now with the burden of age beginning to creep into the equation.

It’s not just cruelty or the inherent unfairness of society that such worthy artists go unrecognized by a wider audience. Being a musician is an elective occupation, at least in theory. Try telling that to Austin though, or the fans who go to see him as he treks across the country with his dog Sally and becomes like a bellow for inspiration, sending emotion pouring out into the crowd so palpable you could paint the walls with it. If you were a promoters or label owner, you couldn’t help but to be swept up in the whirlwind when Austin Lucas hits you with his most potent stories. It’s pure musical magic.

But maybe that’s also the impetus for some buyer’s remorse for those that peddle records. No matter how great the studio, producer, or players, you’ll never capture the full, immersive magic of Austin Lucas on tape. That’s not a knock on Austin or his records, but a nod to how great he is live. That’s about the only theory one can come up with to explain how New West heard this new record, and apparently told Austin it wasn’t good enough, and “we don’t hear a single,” while at the same time holding the recordings hostage and not allowing Austin to release it through the Last Chance label until now.

You think the smarmy, money-first environment in music is only isolated to the major labels on Music Row? Don’t be so innocent. The same unfair practices pervade the independent side of music just as much, if not more these days. The artists just don’t have as far to fall when they’re let go for as simplistic reasons as the person who signed them has changed positions in the company or moved on. 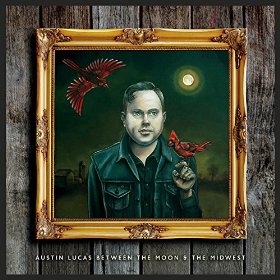 But it’s New West’s loss if you ask me. If anything, this was the record primed to launch Austin to the next level. No offense to his previous record Stay Reckless, which ended up being his only release out of his New West deal, but it was based more in rock and roll sensibilities, instead of the more rootsy elements of this new one. Between The Moon & the Midwest might be Austin’s most country record yet, from an artist known to work a lot of rock into his repertoire—a holdover from his days in punk rock bands that got pretty decent traction in Europe in their day.

Steel guitar, half-time beats, and harmonies are the foundation of this record’s sound, with any non-country moments delivered through ethereal intros and outros to give the album a bit of a spacey feel. It’s probably not fair to compare the two records, but Austin had the idea to get a little cosmic with country before Sturgill Simpson went into the studio to record Metamodern Sounds in Country Music. It was only the issue with New West that made it seem like Austin is following instead of leading.

Between The Moon & the Midwest is primed with collaborations, which make for great promotional opportunities. John Moreland, Lydia Loveless, Cory Branan, Danni Flowers, and Kelly Smith all appear on the album. Though Lucas can get a little too weighty in long stretches at times, there’s a number of selections on the record that could totally be put out there on their own as “singles” if you will, and not only survive, but thrive if introduced to the right folks. “Wrong Side of the Dream” with Lydia Loveless is incredible, and a true story from both these songwriters. “The Flame” is like an instant country classic.

Most of Between The Moon & the Midwest is pursuant to a female character named Kristie Rae, who works like a constant to a story about growing up, and realizing things about oneself through a reflection of one’s own history. It seems as if in between Kristie Ray appearances are more personal songs from Austin, but in truth the two story lines are probably more like two sides of the same coin. Between The Moon & the Midwest isn’t totally conceptualized in the traditional sense, meaning there’s not songs put in there that are completely dependent on an overarching narrative, but the album is enhanced by a strong, underlying narrative that makes each song that more compelling.

As was brushed upon earlier, a few of the songs feel like they would better if taken in live to really see and feel the personal delivery that is essential to “get” Austin’s music. “William” is a bit too meandering and dramatic if you can’t picture Austin singing it unamplified to a crowd of people who’ve circled around after he’s jumped off the stage at the end of his show. Austin has an unusual singing cadence, where he will hold out words or phrases for emphasis. But to a fresh ear, it may be distracting. And a couple of songs like “Kristy Rae” are hindered a bit by forcing forcing rhymes.

What has never left Austin Lucas is the dedication and hunger that drives his music, and has kept his career skirting above disaster for so long. The fact that he was able to get folks like John Moreland and Lydia Loveless to appear on his record shows the respect he receives among his artist peers. The fact that he was ever signed to New West, or shared a stage with Willie Nelson shows that he has the material and acumen to make it at the next level. And Between The Moon & the Midwest proves that his best days, and best material aren’t behind him, but are happening in the here and now.

No review, no endorsement, no label deal or radio promotion or touring opportunity makes any artist. There are performers who’ve been given twice the opportunities and support of Austin Lucas, and they are waiting tables right now, or working at The Home Depot. Nobody knows the formula, or how to navigate the whims of music to steady and sustainable employment, or God-forbid a modicum of stardom. But what we do know is Austin Lucas is an artist worthy of being heard, whether the music industry agrees or not.