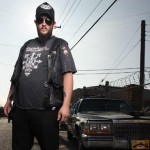 The first thing you need to appreciate about Outlaw Carnie is that it is country. Forget that it’s on a metal label, and that Hank III’s name is being put out there for context. There’s no fusing of metal and country here. There’s no sludgy BC Rich or Flying V guitars, no screamo, cookie monster lyrics. There’s banjo, fiddle, dobro, upright bass, brushes on snare, if there’s any drums at all. A third of these songs don’t have any electrified instruments whatsoever. This isn’t today’s country, this isn’t even your daddy’s country. This is your grand daddy’s country, and if it’s close to Hank III, it’s the Hank III circa 2000-2005, not 2008-present.

The lyrics are where one might say there is a “metal” or “punk” approach, but this is just on some of the songs, and even then, these songs don’t stray too far from what you might hear from Johnny Cash, Johnny Paycheck, or David Allan Coe. The album cracks open with a solitary banjo from Daniel Mason (Hank III), and the second song opens with the fiddle of Billy Contreras, leaving no doubt this is a country project. There is no lip service paid to metal fans or anybody else to assuage you that country can rock. On Outlaw Carnie, Bob puts his country songs out there with a bold “take it or leave it” attitude.

I don’t envy Bob and producer/engineer Andy Gibson (Hank III steel player, too many other accolades to list) for taking on the task of trying to one-up songs that many core Bob Wayne fans have come accustomed to the original versions of. Only a handful of the tracks are totally new to the world. And honestly, the talk of, “Ah, we cut those old versions quickly in the back of the motorhome and sold them in Ziploc bags” made me bristle. I happen to like those home spun recordings, and home spun recordings in general. One could even make the case that the underground country movement was created from the interface of artists and technology that allowed them to record DIY. The heart of the song is what I’m after. I guess a good recording is better than a bad recording, but make sure you mine the heart of the song above all. The rest is aesthetics.

Without question, the new versions of the songs are much more full, much cleaner and polished, fleshed out and thought out. If you listen to the new version and then the old one right after, you get a similar effect of looking through a dirty windshield vs. a clean one. But this is dangerous territory. It’s not unusual for me to use the term “polished” as a negative thing, but I have to say, overall, the new versions are better. Much better. And what is remarkable is it’s the same artist, same engineer, and some of the same players of the older versions. I think this is what gave Bob Wayne an advantage. Put him in an antiseptic studio with a bunch of strangers and we may of watched these songs die before our very eyes. Put him in Andy Gibson’s house with Andy Gibson calling the shots, and they thrived. Andy knows these songs. He recorded them the first time, he’s played them live out on the road. He knows where they need to be, and the proof is in the finished product.

I’ve said it before and I’ll say it again: Bob Wayne may be the best pure songwriter of our generation. But you have to listen. I know that sounds obvious, but the key to appreciating Bob’s music is taking the time to listen to it. There’s two versions of Bob Wayne: the rowdy version, and the introspective version. If you just take a whiff of his music, you’ll probably end up in the “meh” camp who just heard one of his rowdy songs and thought he was hokey. I’ll put the songwriting of “Blood to Dust” and “Reptile” up against any. “Estacata” is a track easy to overlook, but illustrates that Bob is not only good, but versatile and multi-dimensional as a songwriter. Where most of his songs deal in stark language with a bellicose approach, “Estacata” proves he can work in subtleties and deep soul as well. Even a song like “Road Bound” might be mistaken as simply a rowdy ego trip, but lyrics like “All my friends are family, my family is my life,” prove Bob can work in depth no matter the context. 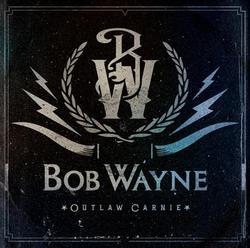 Bob is a storyteller. Whether the story is totally true, like in “Blood to Dust,” or fictitious like in “Work of the Devil,” he has a confident knack of being able to create characters, make you care about them, and then have them do all manner of crazy things, and usually in less than five minutes. Don’t let the “meth snorting, running from the cops” lyrics or the aviator sunglasses and bandanna cloud your judgment. What is going on here is on the Robert Earl Keen, Kris Kristofferson level of songwriting. Yes, Bob has many more skins to hang on the wall to keep that company, but in his short sample, this is the caliber of the quality.

I’ll be honest with you. I’ve always been more for the deep Bob Wayne songs than the devilish ones, and on the whole, the middle child of his three independent releases 13 Truckin’ Songs was my least favorite. But man, this version of “Mack” made me understand what he was getting at with this song, and may have even risen my estimation of all his rowdy songs by proxy. “Everything’s Legal in Alabama” is a silly song, but clever and engaging nonetheless. And how cool is it that Wayne “The Train” Hancock lent his name to this song and this project, and that it was co-written by Derek Dunn of the .357 String Band, once again highlighting the influence of that band that once backed Bob on a full tour.

The Bob Wayne naysayers are really going to hate me for this one, but I think Bob understands good and evil and the relationship between them from a heightened level, in many ways like Johnny Cash did, who Bob gives some credit to for helping save his life. The Cash-esque song “Reptile” is probably the easiest example of this, but God is not referenced in this album just to be damned, but is given credit, for saving his life, or having a master plan, or allowing him to move on from previous sins. A song like “Driven by Demons” marks the antithesis maybe, but that is where Bob resides, somewhere in the struggle between good and evil. He’s a felon and a drug addict, a former drug addict that is. He’s sober now, but willing to sack anything with a heartbeat. Good and evil wrestle for his soul, and the souls of the characters he creates, and this is what makes the Bob Wayne musical perspective so original, insightful, and entertaining.

One thing that drove me a little crazy was it felt like Bob was over-singing at times. Maybe this is a symptom of my brain bending to the worn, comfortable grooves of the older song versions, or maybe a symptom of Bob trying to outperform the old and occasionally over-emphasizing, but if this is the case, this may be the singular place where old vs. new came into play. I’ve never been much for compilation or tribute albums because the first version of a song that I hear is usually to one I like best; it fits like a broken-in pair of boots and the offshoots usually just feel weird. But I was surprised how quickly I latched onto these new versions and wonder now if I could go back. This also speaks to all the great players Bob assembled to flesh these songs out.

From a behind-the-scenes standpoint, this is a very important album. As former and current metal kids flock to these type of hard country bands that are filling the vacuum that Nashville’s pop approach has left in the heart of America for authentic country music, and meanwhile the music industry is going through uncharted contraction and reorganization, how this album is received according to many different parameters might spell how labels and artists proceed for years to come. I’ve seen the comments of metalheads whining that this project found its way on to their beloved Century Media. In some respects I can’t blame them–we fight for purity around here too. But the key to Bob Wayne is you must listen, I can’t emphasize this enough. It’s not metal; no need to be a master of the obvious. The question is, is it good?

I would assert that Outlaw Carnie is better than good. It is great, and worthy of affording Bob Wayne the much wider audience that his music deserves.

Purchase Outlaw Carnie CD For Only $8.00

Also, to fully understand Bob Wayne, you have to let yourself succumb to his sense of humor.