Album Review – Bob Wayne’s “Till The Wheels Fall Off”

Over the years I’ve been a big Bob Wayne proponent, and to some folks he’s been a very hard sell. I’ve always counseled to look beyond the persona to the songwriting. With his new album Till The Wheels Fall Off, Bob Wayne frankly makes that task much harder. At the same time, he’s put out his most enjoyable album yet.

Since the beginning, there’s been two sides to Bob Wayne: the introspective songwriter side, and the “Hellbilly” side. In between are his storytelling songs that tend to draw from both worlds. Despite the bandana and salty language, what Bob is doing is not much different than what Johnny Cash did. Johnny didn’t shoot a man in Reno just to watch him die, or take a shot of cocaine before shooting his wife. It was a persona created to tell a story. Bob has maybe modernized some of the language and themes, but country music songs on the sinful life are a staple of the genre.

What he has done as his career has progressed is tip the scales from the more introspective material to the more hellraising material, and this is where he’s left some listeners scratching their heads. With his first few albums, songs like “Blood To Dust,” “27 Years,” and “The Final Walk” made it easy for the music brain to understand Bob, and then enjoy the hellraising songs right along with the crowd who may see a song like “27 Years” as too artsy.

But with Till The Wheels Fall Off, there are very few of those guideposts. Bob’s first album Blood to Dust was weighted in favor of the deep songwriting material. This album is skewed to the “hellbilly” side, giving detractors heavy ammunition to pass off the whole Bob Wayne presentation as a bad bit.  Even some of the songs on Till The Wheels Fall Off that are presented to be deep, like the lead single “Get There When I Get There” is more ambiguous in nature than artistic. There’s little of that stone cold hard reality that tears at your heart like many of his previous offerings. 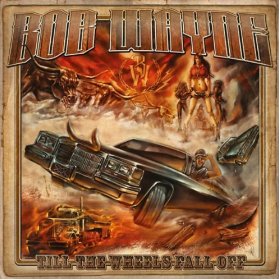 Does that leave Till The Wheels Fall Off vacuous or non-entertaining? Not at all. Not whatsoever. “Devil’s Son” may be the funnest song Bob Wayne has ever put out. And “Wives Of Three,” though on the surface a shallow and silly song, may be one of his best attempts at songwriting.

Let’s take “Wives of Three” as a case study. The first time I listened to this song, I hated it, saying to myself, “Come on Bob, you’re killing me out here!” Then I understood the genius behind it. This song is more David Allan Coe than David Allan Coe. It evokes a whole range of emotions, from creepiness and weirdness, to humor, to sincerity and true love. Most importantly to the success or failure of a songwriter, Bob is able to transport you to a scene where he’s standing in his childhood home with these three women, presenting them to his mother.

You can visualize the whole thing, his mother’s sense of shock and dismay, yet a creepy sense of pride, Bob’s sense of awkwardness and hope that this lifestyle will be accepted, and these three women that in a 3-minute song, Bob is able to present to where you can visualize them, their faces, their stories and motivations. It’s all bullshit that is totally believable and makes your mind explore the inner depths of morality, family, and love.

The words and persona are what everyone seems to focus on when it comes to Bob, but let none of that distract you from the fact that the instrumentation on this album is par excellence. Andy Gibson, Hank3’s steel guitar player and the engineer on all of Bob’s albums, along with an all-star cast of contributors put together an amazing album of music. From conjuring the spirit of Jerry Reed in “Ain’t No Diesel Trucks In Heaven” to the lonesome teardrop steel sounds in “Hunger In My Soul”, this album is a 10 out of 10 on how Bob’s vision was fleshed out.

Your feelings on Till The Wheels Fall Off are going to be based on taste even more so than on most albums. It is my job as a reviewer to divest personal taste for a more true judgement on the work. Do I personally like the strictly hellraising songs like “All Those One Night Stands” and “Spread My Ashes On The Highway”? No, no I really don’t. But I also recognize the appeal and the wit embedded in the songwriting, and won’t let them repeal my love for a song like “Hunger In My Soul”. But not all music is for everyone, and that’s okay. It is not fair to strictly base taste on calling something bad, and it is not fair to call someone’s tastes bad just because they are different from yours. Bob Wayne seems to drive home the importance of these points more than most.

Where I take some points away from Till The Wheels Fall Off is when measuring it against what I know Bob is capable of. He is capable of writing songs that can change people’s lives. If he changes someone’s life with this album, it may not be for the better. There are also issues with the continuity in his storyline. With some of his previous works, his sobriety is a theme, where in this album, it is the breaking of that sobriety. Is this true in Bob’s real life, or an extension of the persona? Either way it is okay, it’s the ambiguity in how you’re supposed to approach these songs that may be the issue.

Instead of just writing on the road, I think Bob needs to get in better touch with his inner dialogue through solitude, so the guideposts leading listeners to the realization of his songwriting prowess are more present.

But this is not a bad album. It is fun as hell. At times you are laughing out loud at some of the lines. Are we so uptight we can’t enjoy music for the visceral experience? Isn’t it fun to go on a vicarious exploration of the id through music and character? This is what Bob Wayne delivers in Till The Wheels Fall Off; an escape, a good time. Sure maybe we, maybe underground country has grown up from most of this behavior, but isn’t that the theme here, that Bob will never change, that he’s going Till The Wheels Fall Off? And there’s nothing wrong with siting back and watching his ride.

Purchase Till The Wheels Fall Off from Bob Wayne