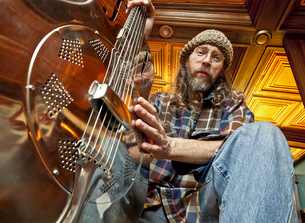 The most virile rhythms of American folklore aren’t something one can look up on your smartphone. You can’t learn them through a YouTube tutorial, or purchase them in a Guitar Center cheat book, or store them on your iCloud. I’m talking about the rhythms and modes carried by immigrants from places such as Northern Ireland and southern Africa, carefully stowed away in the recesses of their brain amongst their most precious of memories for safe keeping, passed down by kindred over generations and held as sacred custom. These are rhythms that are only kept tabs on through oral histories, and have to be handed from one human to another to be articulated accurately, or happened upon by each individual player through personal discovery to unlock their archaic genius.

The properties of these rhythms are both carefully ordered and completely boundless, but they can never exist without the host of a human soul. You can’t convert them to 1’s and 0’s, or calculate them for maximum booty shaking power through algorithm or formula. Sure there’s some electronic rhythms that are able to stir something primal, but the finger plucked rhythms of folklore reverberating through wood and wire awaken something ancestral. They are like a highly-valued mushroom strain, or a truffle that can only be hunted and never manufactured, and will only be found by those willing to venture into the dank and dark regions of American life where the decaying of dreams gives rise to esteemed creations. These are locales where you learn more about music by smashing your thumb with a hammer during a hard day of work, or by sharing your last bit of food with your neighbor as opposed to aping what you hear on an online tutorial.

Amidst the graveyards of American dreams is where you’ll find the grey, bent, and wiry folklore rhythm master known as Charlie Parr nosing around, looking for his next discovery. With a resonator on his knee, and a tapping foot you could calibrate a Swiss timepiece to, Mr. Parr bends his back to looking for the perfect rhythm or melody for a mood like an archeologist looks for a lost civilization’s prized possession. And many times, Charlie Parr finds it. 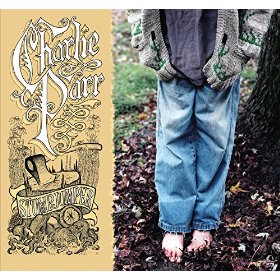 Last year Parr set the pace for artistry in American roots music with his instrumental opus Hollandale. Held together mostly by improvised long-form movements, not a word was uttered, but Parr said more than most ever could through music. It would have been impossible for Charlie to spring board into something even more expansive after the exhalation of creative virtuosity evidenced in Hollandale, but his new record for 2015 called Stumpjumper actually does see growth, and something new from many of Parr’s previous projects. For the first time in any noticeable quantity, Parr has solicited the services of fellow musicians to help give something extra to these recordings, while still showing deference to the bluesy, stripped-down sound he’s always been known for.

Stumpjumper is a deep blues album first and foremost, but it’s Charlie Parr’s master craftsmanship at fingerpicking rhythms, and his folk-leaning songwriting that has liberated him from specific categorization. Stumpjumper may have even more pure blues numbers per capita than normal, but it’s the bass, drums, electric guitar accompanying Parr, and even some backing vocals that make this record a distinction of his discography. His first record released with the noted roots label Red House Records located not far from Charlie Parr’s home base of Duluth, MN, it also finds Parr paired up with Phil Cook of Megafaun as a producer, and the album was recorded in North Carolina.

Authentic blues expressions create the body of Stumpjumper with songs like “Evil Companion,” “On Marrying a Woman with an Uncontrollable Temper,” and “Temperance River Blues.” But songs such as “Falcon” show Parr’s ability to conjure rhythms that are both strikingly original, and incredibly ageless. And like Parr seems to do on every record, he pens a song that seems to be destined to last well beyond his years, which is only appropriate because that is the theme of the incredible “Over The Red Cedar.” In this song, we hear the enhancement of the full band approach really take shape with chorus singers and all, yet the progression of Parr being aided by accompaniment never comes across as unnatural, or even unusual, even if you’ve been listening to him play alone for years. It’s with incredible ease that he enters into this new sound, almost like he’s always been playing with a band, but the rest of us just couldn’t hear it.

By holding the roots of American music in his hands with the same care a new father holds the head of his newborn, Charlie Parr crafts an appeal for his music that crosses party lines. Stumpjumper shows that Parr is not interested in just keeping the status quo rolling along like so many artists do 15 years into their careers, but is willing to push himself and his audience to discover new avenues of expression to continue to grow in what has already become a verdant musical legacy.