If it feels like we were just here a few months ago, it’s because we were. You could call Chris Stapleton’s latest release, and his second one in 2017 “From A Room: Vol. 2,” or perhaps you could call it “Traveller #3.” With little to no personnel changes from his debut LP, the same basic approach to the songwriting and style, cut in the same studio with the same producer (Dave Cobb), you get just about what you would expect from the new record, which is good when considering the heights his previous albums have soared to, and bad when you consider that spice is one of the essential ingredients to keeping music interesting.

When we first heard that Chris Stapleton’s sophomore effort would arrive in two installments, we knew it would take until the 2nd one to really decide what we had here. Like the first From A Room, we only get nine songs, which feels a little short for a full-length release without some extended acid jam or hidden track on the tail end. Just like with the first offering, From A Room: Vol. 2 has a few songs Stapleton fans and traditional country fans have already heard in other places. “Drunkard’s Prayer” was originally cut by John Michael Montgomery in 2008. “Midnight Train to Memphis” was recorded and released during Stapleton’s tenure in the bluegrass band The SteelDrivers.

Furthermore, From A Room: Vol. 2 gives you even less from harmonica player Mickey Raphael, and steel guitar player Robby Turner isn’t present at all, not only giving the record a few less textures, but making it less country than previous efforts, which most assuredly will result in even more howls from Stapleton detractors who say he’s nothing more than a blues and R&B singer in a cowboy hat, however good he might be. All the songs on From A Room: Vol. 2 remain either in the slow or mid tempo, even if there are some electric guitar growls, or solo acoustic moments to create some variety.

You delve into From A Room: Vol. 2, and it feels very familiar; a little too familiar. Even the way the early songs from the record were all released at 11:59 on Friday nights with little fanfare, with fans and media fending for themselves as they see them populate on Spotify amid no promotion, was just like the first volume. Frankly, as time goes on, the whole Chris Stapleton arc has begun to feel a little bit lifeless and unimaginative—or feel like there really is no arc at all, just a flat drone of same sounding songs. Even uninspired. 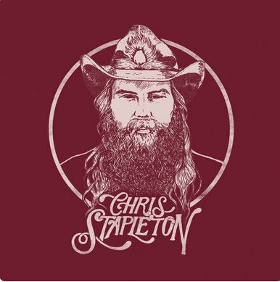 In the sphere of active country music audiophiles, Stapleton’s name has gone from celebrated to heavily criticized. Folks are fatigued from all the news coming out about him, and it doesn’t help when he releases two records in the same year. A critical darling has become almost a dated reference, who you wonder how long can continue to hold the public’s attention at the high level he saw after the 2015 CMA Awards now over two years ago, especially without a “hit,” or a “moment” to keep that momentum going.

But somehow, inexplicably, the albums keep selling. From A Room: Vol. 2 will assuredly hold serve, possibly resulting in Stapleton having three records in the Top 10, if not the Top 5 on the country album charts consecutively—a feat previously achieved only in the modern era by His Garthness. You may have moved on from Stapleton, but many fans out there are still riding the wave and will download or purchase this new record like habit. They’ll buy three and hand them out at Christmas. They love Chris Stapleton, because this is the age of the voice, and the age of the song in popular music, and Chris Stapleton delivers on both, and now, for the third time in a row.

Despite all the obvious concerns for the sameness of the music released in such a short period, From A Room: Vol. 2 remains pretty great when taken with an honest assessment. Yes, it most certainly suffers from a lack of innovation or imagination. Yes, they should have condensed this effort down into one good record instead of stretching it out to two—in what now feels like a pretty transparent effort to maximize profits for an artist who sells via albums instead of singles. But it takes a pretty staunch cynic and hard heart not to hear the distorted kick from Stapleton’s Fender Jazzmaster and his Kentucky coal country yawp at the beginning of “Midnight Train to Memphis” and not get the adrenaline pumping, or feel the steam begin to build around the eyes in the throes of the sincere and sad “Drunkard’s Prayer.”

Chris Stapleton remains a master at his craft. Similar to a magician, perhaps the same tricks tend to get old if you watch them too many times, but that doesn’t make the slight of hand any less deft. You want to take Chris Stapleton for granted? Just go watch Sam Hunt or Thomas Rhett. Is Stapleton not country enough for you? Ditto. How quickly some have lost sight of the time when it was Luke Bryan and Florida Georgia Line setting all the records and winning all the awards, and just how remarkable it is that Stapleton is receiving this level of recognition, acclaim, and widespread acceptance. And that his talents are quite worthy of it.

When Chris Stapleton came along, everything in mainstream country music sounded the same. Then Stapleton showed up, and added a shot of variety and interest. Now it’s Stapleton who needs the shot of variety. Listening to this record, just like writing this review, feels like formality, which can never be good for a performing musician. Stapleton just doesn’t have that same passion, or the personal upheaval that you see in some of your favorite artists. He’s happy. He’s content. And he’s not writing a lot of new songs as he’s shared in interviews, or hungry to achieve anything else in his career. Nor is he impassioned to share some groundbreaking notion of what music should be in the modern era.

Instead, Chris Stapleton is just fine sharing songs he wrote eight years ago recorded in 15 minutes with his road band. But considering the alternatives in the mainstream, and Stapleton’s undeniable talents, so should you.