I get accused sometimes for hating or ignoring music simply because it is popular, or for ignoring certain sectors of music, like Red Dirt music for example. I try to explain that just because I don’t talk about something doesn’t mean I don’t like it. My charter is to talk about the music that nobody else is talking about. The Red Dirt scene for example has it’s own sites and blogs. And if I had time, for sure I would love to cover more middle ground between the underground and mainstream.

When I heard that Cross Canadian Ragweed broke up and Cody Canada had formed a new band and was planning an album, I was immediately intrigued, and I’m not sure why, maybe because Cody is emerging more every day as a leader from sonic and other standpoints. This album doesn’t need my help. It charted #13 on its debut. But here I am, writing a review. 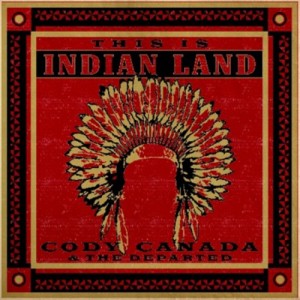 My first remark about this album has to be that it is really not country, and really, this is a concern for many of the bands ballyhooed from Red Dirt as country saviors. Of course, without question, the world would be a better place if we could swap out the Red Dirt hierarchy for all the rubbish on Music Row, but that doesn’t make a rock song country. There is some fiercely country projects in Red Dirt, but this certainly isn’t one. I would call it more roots rock. There are Tom Petty albums with more country elements than this one. These aren’t necessarily criticisms, I like rock music too, it’s more of setting the album in a proper context.

My second remark about this album would be that it is excellent. This is one of the funnest, freshest, well-written, well-produced albums to come out this year. There’s good songs, good performances, and it’s bold. There’s 15 songs here. Normally these days the the more you go over 10, the more trouble you get into, but there’s very little fat to trim here, and the thing I was most impressed about with this album is its originality. While still sounding relevant and un-obscure, Cody and The Departed were able to stay out of the well-worn grooves that run like tired veins through so much of mainstream music. This is a “tribute” album (so to speak) to Oklahoma with all the songs coming from other writers ranging from Leon Russell to J.J. Cale, but the selections are so wise and the approaches so original, you could swear this is an album comprised of wholly original, new music.

The album starts off with the trippy “Face On Mars”. So many folks are trying these types of songs these days, and failing with flying colors, focusing more on specific sounds instead of building from the groove out like Canada & Co. do here. “Ballad of Rosalie” just might be the hit of the album, a fun song with great dynamics. It’s a love song, but the twist is that it’s about a guitar. These are the type of twists that make this album feel so fresh and original.

Songs like “Make Yourself Home”, “Water Your Own Yard”, and “Years in the Making” show a lot of wit and wisdom in the songwriting. “A Little Rain Will Do” is an excellent little acoustic number, probably the closest this album gets to country, and just like the songs that have “Oklahoma” in the title and the cover and theme of this album, there is strong ties to Cody’s roots all throughout this music, despite the sounds not being as rootsy as some might prefer. In Texas, we have a saying about why Texas doesn’t fall into the Gulf of Mexico, but regardless about how you feel about the Sooner State, Cody’s Oklahoma roots are what give this album a strong foundation to build from.

“Skyline Radio” is probably the most mainstream-sounding of the tracks, paying homage to the original Red Dirt radio station. It’s catchy, almost to a fault. The album closes with a jam called “Hold On Christian” that accomplishes what so many songs try so hard to do but usually fail at, which is re-creating the energy of a live performance in a studio-based track. If you’re gonna throw 18 tracks out there for people to pick at, you better end with a bang, and that is exactly what they did with this song.

The only tune that glared at me for criticism was “Kickin’ Back in Amsterdam”. These pot anthems are so tired, almost as tired as the Music Row laundry list songs. In the 90’s through the mid oughts they were hip, but now they just feel worn, and the music unfortunately doesn’t carry the tired theme.

For Red Dirt fans, for rock fans, for fans of country that is mainstream but not pop or plastic neuvo Outlaw drivel, this album will be right down your alley. If you’re into the heavy twang or the punk-infused country world, this may still be a good guilty pleasure. But either way, This Is Indian Land is very good.

Preview Tracks & Purchase This Is Indian Land (only $5.99)