Looking like a hippy, writing like an Outlaw, sounding like a Texas country stalwart, and touring like there’s no tomorrow, the name Cody Jinks belongs smack dab in the mix when you’re speculating on who is the best and the brightest in the current crop of insurgent country songwriters.

From Ft. Worth, TX, the first thing you notice about Cody’s music is that familiar “somewhat country, somewhat rock” sound indicative of Texas country. The arrangements are sensible, with electric guitar comprising the foundation, though not being afraid to mix in some steel and other country elements. Cody’s voice is twangy, but not too overstated. You do get the feeling he wants you to know he’s country, but he’s not trying to prove to you how country he is as some who make the Texas circuit in their perfect Wrangler shirts and jeans do; he’s a lot more laid back than that. But this is country music, both honoring and indicative, while sweetening the sound enough to appeal to a wider ear.

To be perfectly honest, the music set to Cody Jinks’ songs is not what separates him from the herd. It doesn’t really take any chances. It’s not bad, but it’s not really an asset either. It’s that safe Texas country approach. The songwriting is what makes Cody Jinks contrast from the crowd in both Texas country and beyond. 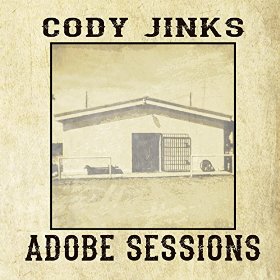 Adobe Sessions—Cody’s 4th release overall—starts off in a way that will get some listeners’ blood pumping, while others will wonder if its worth their effort to listen further. Whatever commercial aspects this album has, they’re front loaded at or near the the beginning, while the deepest and most creative expressions bring up the caboose.

“What Else Is New” comes from the long line of country songs that take a narrow look at current events from the rural perspective of wanting to simplify life by focusing on one’s own struggles, while the guitar hooks and changes seek out fairly familiar modes. The expressions of the second track “Mamma Song” go somewhat deeper, but it still doesn’t offer much of a scintillating effort musically to deliver something decidedly original. By the time you reach “Cast No Stones,” you start to wonder if Cody Jinks is shooting to create a persona instead of relinquishing his original creative expression, and despite a few interesting lines in “Loud and Heavy,” this is another song that can lend to this burgeoning theory.

But there’s so much more here, and whether you find the sweet spot of Cody’s music in the first few tracks or they leave you wanting, the audience is encouraged to continue to listen, and to listen deeper. “We’re Gonna Dance” and “Birds” is where you start to really see the songwriting capacities of Cody Jinks rise to the top. “David” is deftly-written in the classic storyteller sense about a policeman who inadvertently causes the death of an old friend. “Me or You” is where the production and music rise to benefit the composition, while “Folks” is where Cody Jinks shows you an entirely new aspect to his abilities as a songwriter. “Dirt” is the most country track on the album set in the depressionary era, and “Rock and Roll” really puts a personal stamp on this effort, and one that leaves the listener with a lasting impact.

Adobe Sessions is a really solid album, and one that some are saying marks an early entry for Album of the Year. I would like to see a more consistent effort before handing out such accolades. Jinks, though very much a mature artist, feels like he needs to decide between being sensible or being substantive. Trying to play the lines between the two could mean he never really appealing in large part to either. What’s hard to deny however is his hunger for songwriting that is exhibited heavily on Adobe Sessions, and is worth a strong consideration even if nothing else is.