50% of Americans may not be able to correctly identify that Saskatchewan is a part of Canada, or even have the presence of mind to comprehend that Canadians are technically Americans as well, but if one of your friends has been exposed to Canadian country singer Corb Lund‘s music and scoffs it off as something too foreign for their ears, you may want to seriously consider a renouncement of said friend’s country music citizenship.

The United States is not the only land with lonesome cowboys and wide open spaces. Corb Lund grew up on his family’s farm and ranch in Alberta (the Canadian province, not your smelly aunt with 6 cats), and his rural cowboy life and thirst for country comes through in his music. There’s no corny hoser-ism here, Corb Lund is rich with ribald and wit, with forays into rock & roll and wild diversions of the mind from a man struggling to relate to modern society. He’s crazy in a way that doesn’t come across as weird, but endearing, and almost warm and soothing in the way he articulates madness as a mechanism to cope. 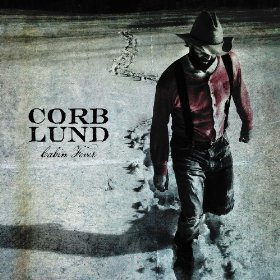 His newest album Cabin Fever starts off with one of these songs, “Getting Down On The Mountain”. This “Country Boy Can Survive” – type number has been done before, but never Corb Lund style, and as long as the only hope some disenfranchised souls can find in the direction of the world is in a prayer for the utter destruction of it, it will always be relevant. It starts off with a catchy beat, almost like many modern pop country songs, but this one has Corb’s cool factor conveyed through his relentlessly entertaining songwriting and sense of groove.

Unlike a lot of artists who are regarded as “songwriters” Corb isn’t afraid to use words for rhythm, and isn’t too pretentious to let you disengage from the “art” and enter the primal world where you should feel instead of listen. “Dig Gravedigger Dig” and the Beach Boys-esque “Mein Deutsches Motorrad” get hands clapping, boots stomping, and the frau’s shaking booty. Corb has the Brian Wilson vibe on “Mein Deutsches Motorrad” down pat, even to the lead guitar. If Cabin Fever was lacking in one area, you may point to the lead parts and instrumentation: not bad, just not really present as some in-your-face element to the album. But Cabin Fever is so entertaining without some superpicker dynamic superimposed on top, adding that may drown out the more important elements: the words, the emotion, and the groove.

And just as some songs are there to make you move, some are there to just make you laugh, like the sardonic but still somewhat social commentary-laced “Cows Around” or the observant “Gothiest Girl I Can”: 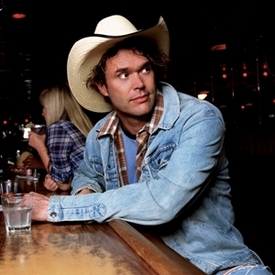 Some really great Western/Cowboy storytelling songs made the cut for Cabin Fever in the form of the dark-humored “Pour ‘Em Kinda Strong” about a wanted man’s last sips, and the even darker-humored “Priceless Antique Pistol Shoots Startled Owner”. Cowboy themes mixed with love is the brew for songs like “(You Ain’t Been A Cowboy) If You Ain’t Been Bucked Off” and “One Left In The Chamber”.

About the only track that has “straightforward” as an attribute is Cabin Fever‘s first single “September”. As much as I like this song and it adds some deeper substance to the album, I also am worried it misrepresents Cabin Fever and Corb. The only song I didn’t care for was “Bible on the Dash”. I swear, before I looked at the liner notes, when this song came up I wondered why Corb was trying to do a bad Hayes Carll impression. No offense to Carll, but his drunken, swervey sarcasm seemed a little out-of-place in this duet, and honestly, outmatched by Corb’s similarly irreverent, but more elevated use of wit.

Whether you’re a long-time Corb Lund fan, just hearing about him right here, or just feel like helping support the Canadian economy, Cabin Fever is a great album of country music, one of the best of 2012 so far.