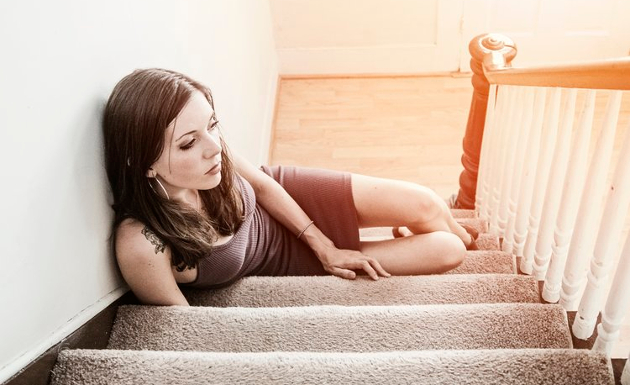 From Fredericksburg, Virginia, songwriter and performer Karen Jonas stunned those few lucky music listeners who paid attention to her debut album Oklahoma Lottery when she independently released it in 2014. The album evidenced bouts of brilliant songwriting, and showcased her unique style of guitar playing and strong vocal aptitudes. But most importantly it announced her as an artist that would undoubtedly have many more albums and songs to share in a promising and hopefully productive future. She was an artist you could immediately etch into your list of new favorites, and if Oklahoma Lottery was the foundation to build from, who knows where it could go from there.

It’s within this anticipation that her sophomore effort Country Songs comes spilling out of her songwriting pen just as fervent and hungry as her first effort, yet with more refined and deliberate results due to the wisdom won through the experience of her debut.

Karen Jonas does not boast a stereotypical country music songwriter back story, where she can cite being reared on Waylon Jennings or George Strait, or say how her years on a ranch instilled her with an undying passion for rural sounds and themes. Yet instead of this becoming an anchor on her country cred, through her honesty Karen discovered the theme of this record, and specifically the theme for the title track that embodies the classic heartache that regardless of who you are or where you’re from, country music is the best cure for. 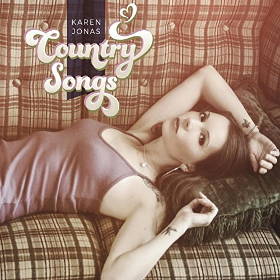 And not only can Karen Jonas sing about heartbreak, she can sing to it through her own experiences and ability to articulate it through her elevated instincts in songwriting. Young Southern boys in their dirty jeans and pickup trucks may have plenty of grime under their fingernails, but many have never had their heart broke in the the manner that makes Karen Jonas not just uniquely qualified, but creatively gifted to share that emotion through song.

Karen Jonas is a case of an unbridled heart that has just enough self-awareness to know its out of control, but at many turns still seems powerless to do anything about it. The upbeat and reckless “Ophelia” could be couched as Karen giving advice to another, or emphasizing truths she knows to herself, but seems to be powerless to heed.

Beyond the title track, Country Songs finds its best offering with the heartbreaking “Wasting Time.” In a just world, a song this well-crafted and immediately classic would be picked up by a bigger artist and made into a super hit. But in lieu of this, it will be something those patient enough to listen will find rivaling any other for one of the best of the year, even if it veers off the country page towards a more contemporary arrangement. “Whiskey and Dandelions” is another well-written and more traditionally country-themed tune, while a couple of the sleeper tracks of the album come near the end, including “The Fair Shake” that creeps up on you to expose the smart, compositional side of Karen’s songwriting, as does the final track, the silly but richly sad “Yankee Doodle Went Home.”

Where Country Songs lacks a little bit is in the production of this record. There’s nothing wrong with it, but that’s almost part of the problem. There’s just not really a fingerprint or signature to the sound, despite an excellent effort by Karen’s guitar player and right hand man, Tim Bray. Karen’s first record may have come with a flub or two, but it had a roguishness and a raw nature that made it not just compelling in what the material said, but cool in how it conveyed it all. Some may even go as far to say Country Songs, despite the title, is a little popish in places, even if acknowledging the other positive aspects about the songs and music.

In spite of the progress made in independent country and even mainstream country in the last couple of years since Karen Jonas’s debut to shine a brighter light on the better talent going overlooked in the industry—especially artists who have such promise for future output—there are still holes in the filter where artists like Karen Jonas fall through. Karen’s songwriting is strong enough to deserve a top-level producer and independent industry support. Hopefully Country Songs is the vehicle to help her find that.