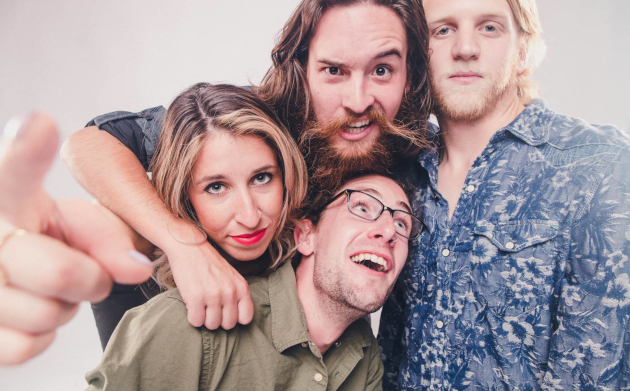 If you like your bluegrass served with a little punch, attitude, grit and gravy, with that busking spirit that was so present and palpable in the early incarnations of Old Crow Medicine Show and made your realize that string band music could be so much more than fuddy-duddy reenactments by crusty ol’ relics, then the Damn Tall Buildings will slide in nice as a welcome edition to your listening rotation. Bluegrass at heart, but pulling from a wide range of influences including swing, ragtime, jazz, and even a hint of contemporary perspective in the songwriting, they offer virtually unmatched energy and enthusiasm, underpinned by intelligent songs that don’t skimp on the infectiousness.

The Damn Tall Buildings combine the best of both worlds when it comes to the string band discipline. Guitarist and primary singer Max Capistran, fiddle player Avery ‘Montana’ Ballotta, banjoist Jordan Alleman, and bass player Sasha Dubyk all attended the prestigious Berklee College of Music in Boston, which of course has birthed some of the best bluegrass talent we’ve seen in recent memory, and gives musicians some of the most valuable bluegrass instruction available on the planet.

But after theory classes and recitals, these hungry and ambitious pickers didn’t just retire to their dorms to play PS3 (at least not all the time). Instead they took to the streets to busk old school street corner style to refine their performance chops, which in the ranks of formally-trained musicians is frankly where some fall short. This doubling up on discipline and experience comes through in the raucous live shows of the Damn Tall Buildings, and in the many aces laid out on the table in their newest album Don’t Look Down. 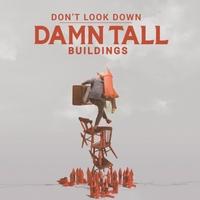 Nobody’s playing second fiddle in this outfit. Each player brings an important and unique aspect to the band, and you better be able to sing harmonies and keep up, which all the players do. They’re refined and experienced, but just enough off off kilter to keep it cool, dangerous, and greasy. With the speed they sometimes achieve, they make you think it could all just come unwound at any moment, keeping your eyeballs glued and ears attentive.

Then they’ll hush the crowd with a musical keepsake, satiating all the sectors of your musical palette after a session with their music. The musicianship is smart and skilled, but still playful and groove savvy. And Sasha Dubyk brings both a sultry dimension to the songs she leads, and a more fair tone to the three and four part harmonies, separating the Damn Tall Buildings from the usual musical onslaught of breakneck bluegrass dude bands.

After a few years trying to make the Damn Tall Buildings work in between other commitments, the band has now all come together in Brooklyn, New York—which as many know is an emerging haven for country and roots—to make a go at this thing real serious like. Seeing them perform live, and listening to the results of the studio time put into Don’t Look Down, the Damn Tall Buildings certainly deserve greater attention from the bluegrass, Americana, and country music community as a worthy outfit to bring the proud and important traditions of strings music to a new generation, and to do so with a cheerfulness and proficiency that will get folks to shut up and pay attention.