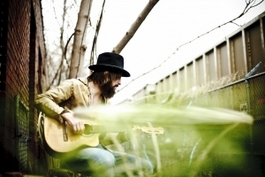 Embedded in the timeline of music are these choice, rare moments when a sound is captured that seems to give a definitive audio reference to the most authentic human emotion. Creating these moments is what every artist yearns for when they bend to the task of composing a new record, but little do they know that the most cherished of these timeless moments are rarely attained by anything more than sheer accident.

The string of early 70’s Rolling Stones albums starting with Sticky Fingers and centered around Exile of Main St. was quite possibly the first time the white man figured out how to capture sweat on a recording, but this wasn’t necessarily what The Rolling Stones set out to do. They were simply trying to navigate the freedom of a new recording deal, while avoiding massive tax liens that precluded them from going home to the UK to record. This resulted in sometimes manic recording sessions, many times captured by their inferior mobile recording studio. Meanwhile nearly the entire band was a hair away from a heroin overdose and hanging out with the bad influence of Gram Parsons. Gram was a bad personal influence at least. Like he did with The Byrds, Parsons made The Stones believe it was their idea to go country.

40-something years and a few heroin overdoses later, the sound evoked in those Sticky Fingers / Exile sessions is still strived for by musicians of many stripes, yet rarely achieved. It’s not just about 2-inch reel to reel tape and vintage amplifiers. Simple tone is not enough. The sound comes from a feel that there’s no true formula for, only a notion in your heart that you know when you hear it. Separating themselves from those with only a half-sense for the early 70’s vibe and hipsters who see it as trendy, the Deadstring Brothers have been proving they have an unadulterated sense for that coveted heroin sweat sound and how to mix it with their own original expression since their first album on Bloodshot Records in 2003. 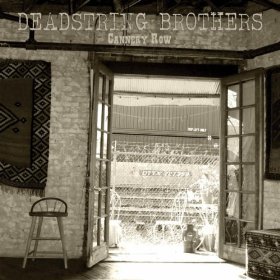 If you’re looking for superpickers to get your spine tingling or superlative poetic exorbitance, you’re sorely missing the point of the Deadstring’s Cannery Row. This album is an evocation of warm memory, burrowing deep into your brain matter to reprise moments that meant something in your life and allowing you to relive them. It tugs at your heart strings, but not in the traditional way. It does it from the inside out–with a familiarity of feeling that is customized to your personal ear and experience.

A country rock album in the classic, Gram Parsons sense of the term, Cannery Row sets a sepia mood and sternly sustains it throughout. This is one of the most aesthetically-pleasing albums that you will listen to all year. The album’s opening track “Like A California Wildfire” may come across initially as a little too cliche to hold your attention, but like the heroin sweat it harkens back to, after a few doses, you’re hooked. “Oh Me Oh My” is another standout, with it’s bright, hooky pedal steel guitar cutting to your bones, and the male/female harmonies helping give warmth and depth to the story.

You damn near hear Jagger at the beginning of “Long Lonely Ride,” but that is Deadstring mainstay Kurtis Marschke who is the primary writer and singer of the songs. He’s joined by JD Mackinder, a member of the Bloodshot Records family that made the move over from Whitey Morgan & The 78’s. Pete Finney’s pedal steel is one of the most tasteful elements of Cannery Row, and the same could be said for Mike Webb’s keys. This album is drenched in harmonies from Kim Collins, and you may recognize the name Mickey Raphael bringing his all-familiar harmonica tone to this already familiar-feeling album.

One fear is that Cannery Row may not contain the type of diversity in texture needed to grab some people’s attention and hold it, but many of its tracks work so great autonomously, including the album’s first five cuts, and it’s most country offering, “Lucille’s Honky Tonk.”

Cannery Row works so well from the history of so many legendary recordings behind it, while interfacing with the individual history of the listener in a harmonious, memorable experience. Simply put, Cannery Row is a pleasure to listen to.