If you want to be like Hank Jr. and Waylon, then yes, you have to be stone cold country. You have to be able to feel the pounding of the bass drum deep beneath your music, and be a master of the half time realm. You have to deliver your whiskey-soaked lyrics as effortless as breath. And you don’t have to write all of your own songs, but you damn well better make sure your name is carved on some of your best ones, because that’s when it counts.

Riser House recording artist Dillon Carmichael can check off all of those boxes on the honky tonk requirement list. But the most important obligation Dillon or anyone else must fulfill if you truly want to emulate the old country greats is you have to do it all while also being true yourself, just like the old greats were. You can’t just be a reenactment or a museum piece. With his debut album Hell On An Angel, Dillon Carmichael clears that most difficult of hurdles too.

Exactly a year ago to the day is when Dillion Carmichael first made an auspicious debut in front of Saving Country Music readers with a tune entitled “Old Songs Like That.” That song didn’t even make this record, and neither did another early track called “Made To Be a Country Boy” that helped create a keen interest in young Carmichael. Delays in this release almost did in the fevered anticipation for this record. And though it still may be appropriate to ask where “Old Songs Like That” and other songs are, Hell On An Angel still delivers an incredible, resounding gut punch.

We’re not talking honky tonk country by close approximations and burdened with qualifiers. Dillon Carmichael is the pure, unadulterated, 100 proof version of country. If the term was still cool, you would call it “Outlaw.” Producer Dave Cobb has become the eternal blessing or the endless curse of the classic country and Americana realm over the last few years, depending on your perspective. Either he hits a grand slam or seems to whiff. With Dillon Carmichael, it’s fair to assess that the ball ends up in the outfield parking lot. 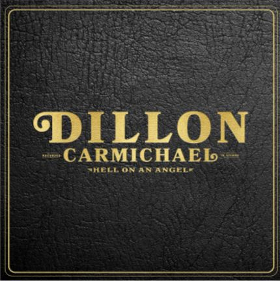 This record is nothing short of merciless in how it just grinds out one deeply-powerful, slow and plodding track after another. “Country Women,” which was one of the few track Dillon didn’t write or co-write, offers a little bit of relief from this onslaught, and the title track is nothing short of a Southern rock super anthem, perhaps a little too zealous if anything. But everything else is too damn slow in the best possible way, like the Southern drawl of your grandpa on a Sunday morning, graced with a familiarity that makes you feel like you’ve found home. Dillon Carmichael and Hell On An Angel is what we mean when we say “country music.”

Like all great things, country music gets better with age. This is what makes us revere the old greats of country, and suspicious of fresh-faced newcomers, like some are sure to regard Dillon Carmichael. His skin may be tender, but his soul is definitely old. And that speaks nothing to this young man’s pedigree. He is the grandson of Harold Montgomery, who was a respected Kentucky country singer, and Harold Carmichael, who was a member of The Carmichael Brothers. More famously, Dillon’s the nephew of country music performers Eddie Montgomery, and John Michael Montgomery. Lineage can go a long way in country music. Dillon Carmichael is a good example. But if anything, his sound is even older than that of his famous uncles. He’s also the latest example of how Kentucky continues to give us many of the greatest songwriters and voices of our era.

One of the issues with hard-pounding “Outlaw” country from modern artists is how braggadocios and self-affirming it can be. We heard hints of that in the first two songs Dillion Carmichael released that didn’t make this record, and maybe that’s why they were left behind. Some will scoff at the sentiments of the song “What Would Hank Do” as a rehash of a tired Outlaw country theme. On the surface this is true, but the song is also true-to-life for Carmichael. First signed as a songwriting before he finished high school at the age of 18, they tried to get him to conform to today’s commercial country. But that’s what makes Carmichael unique. If he was at risk of being led on the wayward path, it would have happened already. Instead, his early experiences in Nashville inspired him to double down on his roots, and you hear it throughout Hell On An Angel. There isn’t an ounce of compromise on this record. It’s twang. It’s country. It’s down home and heartbreak.

There’s also none of the fuzzy production issues that beset some Dave Cobb projects. Instead it’s especially clear and present. Cobb doesn’t try to interject some unnecessary Muscle Shoals soul where it doesn’t belong, but backup singers are employed in the perfect moments. Like with Sturgill Simpson’s first record and even the Wheeler Walker Jr. efforts, when Dave Cobb dials in the twang, it’s tough to beat. He pairs Carmichael’s tightly-written compositions with the work of the Man of Steel, Robby Turner (Waylon’s final steel player and producer), electric guitar from Leroy Powell, and along with other Studio ‘A’ go-to players, they make a record that comprises the heart-pounding, slow-charging stone cold country sound of Dillon Carmichael that comes at you like a heavyweight haymaker.

There’s just something about being in the country that settles your mind, and warms your heart. You can count on it. It’s not complicated. You sit beside a lake with a line in the water, or stretch out between a tall pine, and everything is right in the world. That same feeling washes over you when listening to Dillon Carmichael’s Hell On An Angel, not just because the music is good, but because it assures you that country music is in good hands for the future, with young, impassioned artists keeping the sound alive, and showing sincere promise to help do so for many years to come.