There’s too many bands, and too many artists making too many albums that try too hard to say something or find what is “next” in music instead of letting the music flow and speak for itself. Mainstream country fans will retort to hoity toity Americana fans, “Does music have to be serious all of the time?” The answer is no. But it can also be fun without insulting your intelligence, or making you feel like you need to take a shower after listening to it.

The Electric Rag Band from Tulsa, Oklahoma is a fun little two-piece outfit made up of father Pat Cook (guitar, vocals), and son Daniel Cook (drums) who play bar gigs and opening slots in and around Oklahoma and adjacent states and beyond for acts you’ve probably heard of; acts like Billy Joe Shaver, Junior Brown, Dale Watson, JD McPherson, Scott Biram, and the Turnpike Troubadours. Combining influences as varied as the aforementioned artists, but with these influences all residing well under the “roots” umbrella in an agreeable mixture, they put their own spin on country and bluesy groove rock, making up for lack of manpower with heart and a quirky coolness that bands many times their draw in the music can’t muster. 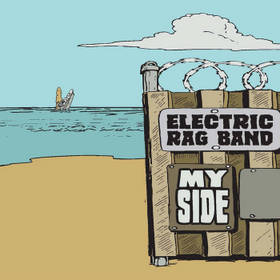 First off, how cool is it to have a father and a son in the same band? There’s a beer league factor to the Electric Rag Band, and not in a bad way. They make music when they can, how they can, and for the right reasons. And they’ve been doing it for quite a while now. Formed in 1994, their new record My Side accounts for their sixth release, and showcases the duo in a sort of a free form style, switching back and forth from blues to country to rock, but always finding the right groove and a cool riff to keep the song spinning forward.

Perhaps listening to a two piece band live might get a little tedious after a while, but on My Side, they take advantage of the studio setting to add a few tasteful overdubs of lead lines or bass notes here and there. Even though I kept wanting to tell myself there was nothing truly special about this band or this record, there I was hitting replay, and craving the groove of the title track especially, as well as a number of the other cool selections from throughout this record.

“Do This To Me” is a cool little country blues number that shows off how proficient Pat Cook is at playing in a number of different styles. Whether it’s electric slide, acoustic finger picking, or something in between, he can lick it. Both twangy turns and bluesy runs are well within his repertoire, and son Daniel follows right along. The songwriting isn’t especially remarkable at any moment, but it’s always worthy of your ears, like the story of “Do This To Me” about always getting nervous around the girl of your desires, while the groove of songs such as “Like I Want” and “Two Dollar Strings” are hard not to fall for.

The Electric Rag band reminds one of the nascent era of the deep blues and underground country scenes when the definitions for the music were nebulous, but the music always found an amiable sound. It is a respect for all styles of roots music forms but a devout loyalty to none in particular that go into that acquired underground roots taste.

My Side isn’t a world beater or anything, and it gets a little wonky in places rhythmically. But I found it to be a very enjoyable album that was hard to turn off, and most importantly, reminded one that music isn’t always supposed to be about the next big thing. It’s also about making you feel something in a local bar on a Saturday night in a way an internet jukebox or karaoke rig could never suffice for. Long live cool little roots duos like the Electric Rag Band.

Purchase Electric Rag Band’s My Side on Bandcamp