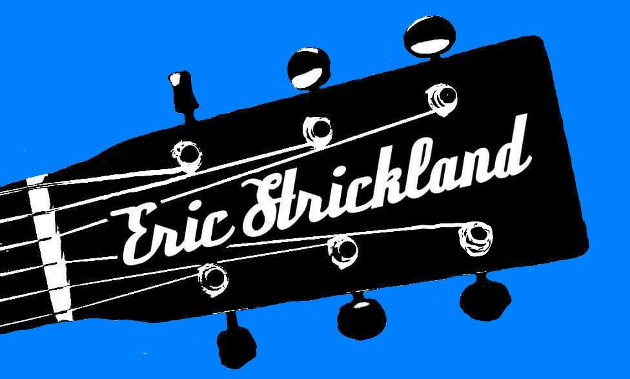 A good song is a good song, and so is a good voice, no matter how it’s styled. It could be traditional country, singer/songwriter, classic honky tonk, Americana, or something more contemporary. But in the age of the song, it’s what’s being said, not how it’s being presented that is the most important.

That’s why folks didn’t need to worry too much when North Carolina’s Eric Strickland decided he’d throw everyone a curve ball and release a bluegrass album. If anything, it was a reason to be excited. No country music legacy is cemented without a foray deeper into the roots with a Gospel or bluegrass record, or both. Alan Jackson and Dwight Yoakam both did this recently, and even though Eric Strickland may not be on that level of popularity, to the folks who know the name and music, Eric Strickland’s legend looms just as large.

Don’t be surprised if you’ve never heard of Eric Strickland before. Aside from some love from Dale Watson’s Ameripolitan outfit, Strickland’s efforts have kept him more of a regional act. But that doesn’t mean his talent isn’t worthy of international acclaim. His string of honky tonk/Outlaw efforts, including 2012’s Honky Tonk ‘Till I Die, 2013’s I’m Bad For You, and 2015’s Revelate with his band The ‘B’ Sides is about as meaty of a run of country music projects as you can find from anyone.

But Strickland has always been a bit of a unique one, sort of living in two different worlds. Unlike a lot of people who make music, Strickland never seemed to desire to venture too far afield to find some level of “stardom.” Unlike a lot of “Outlaw” artists, Eric would often sing love songs about his devotion and appreciation for his wife. He had the angel on one shoulder, and the devil on the other thing going so to speak, and it made for really interesting music, and for something more authentic than some of the endless bravado about drinking and cavorting that comes from other “Outlaw” artists attempting to endlessly prove their badassedry. 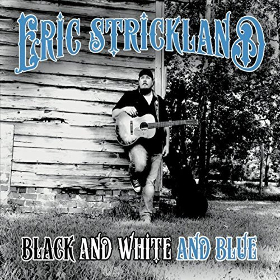 This new album Black and White and Blue isn’t just about Eric Strickland making a bluegrass record, it is about Eric exerting his desire to not be pigeon holed, and pulling away from the whole “Outlaw” moniker that has become so compromised in recent years, co-opted by the mainstream, and used to peddle subpar music that only takes shallow observances from the careers of Waylon, Paycheck, and Coe, missing all the sentimentality and moral. And what better way to do that than by saying “screw it all, I’ll make a bluegrass record.”

Bluegrass these days has its own set of dilemmas, including how it sometimes feels more like a skills competition as opposed to a musical art form. But Strickland returns the music to the back porch style as opposed to the pentatonic acrobatics of most modern bluegrass. Don’t expect a bunch of songs about foggy mountain bottom tops or a crazy uncle’s moonshinin’. Black and White and Blue is 12 songs you would expect to hear from Strickland, only with acoustic tones and no drums. Just like Strickland’s other records, it was produced by the well-respected Clyde Mattocks, who also plays dobro on the album.

Just as taking a bluegrass approach signals a more mature effort from Strickland, so do the songs. The opening song “Black and White” laments the loss of values in American life, and wishes we could return to the simplicity of Mayberry (which was based in North Carolina just like Strickland). Eric often sings to his better half, which is probably one of the reasons he’s never found too far afield from North Carolina for too long. The love here is deep and true, and this is told through songs like “One Memory At a Time” and “Angel Like You.”

But to really understand what Eric Strickland is trying to get at with Black and White and Blue you have to listen to “I Ain’t Much of an Outlaw.” Here Strickland spells it right out in the verses, casting aside any labels that may be pinned on him by himself or others, and letting the music world know he isn’t anything more than “a country boy doing my thing.”

Black and White and Blue finds Eric Strickland comfortably settling into the identity of a family man, devoted husband, and the man of faith that he wants to be, and using the more traditional spirit of bluegrass as the vehicle. By going bluegrass, this also means relinquishing a little bit of the edge and conflict that marked his previous efforts. But it also means he’s being more honest about himself, at least where he’s at in life right now. Like all good artists, Eric Strickland is growing with his music as opposed to letting it hold him back due to expectations. Whatever you call it, it’s still Eric Strickland, and that’s what his fans come for.