Once again, Jason Ringenberg proves why he is cooler than the rest of us.

Possibly better known to you as the cowpunk pioneer and legendary frontman of Jason & The Scorchers, Ringenberg’s alter ego “Farmer Jason” brings some serious passion to his new release Farmer Jason and Buddies: Nature Jams. Far from your average fare of kids albums, Nature Jams includes all original songs and some mouth-watering collaborations mom and dad can appreciate. Hank Williams III, Todd Snider, Brandi Carlisle, Tommy Ramone, Iris Dement, and Mike Mills from REM are just some of the names that stop by to help Farmer Jason entertain your little ones without wearing you out with the usual white washed kid album sounds. 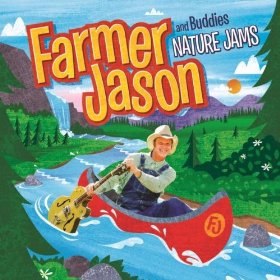 What I like about this album is that it’s real, original music, that is written and arranged for kids, but doesn’t talk down to them. It is played on real instruments by a lot of great folks that are respected in their craft, and begins a young person’s musical journey on a strong foundation of quality, originality, and craftsmanship, while still being very accessible to kids through it’s themes and music. With fine arts budgets being cut in public schools, it is up to parents to make sure their children are instilled with the appreciation of music that will make their music journey’s fulfilling, and Farmer Jason gives them an excellent tool in Nature Jams.

The message of Nature Jams is to get out there and be active by exploring your world. From canoeing with banjo player Alison Brown, to spelunking with Tom Petersson of Cheap Trick, from Celtic-style music with The Saw Doctors to cajun music with Terrance Simien, Farmer Jason takes the kiddos on a journey the bridges music, nature, geography, and knowledge. Is this one of those kids albums that adults can enjoy exclusively, kind of like Taj Mahal’s Shake Sugaree? My feeling is probably not, especially with the dialogue that begins the songs. But at the same time, you will find yourself being engaged by this music, and carrying it around with you in a hum during the rest of your day.

Something else that’s great about this album is that the collaborations create a primer of some of these artists whose names you’ve probably heard, but may have not been able to explore deeper. Brandi Carlisle’s yodeling on “Have You Ever” is sublime. Webb Wilder’s “Buffalo or Bison” poem is one of the treats of this album. And the diversity of style that Farmer Jason employs keeps this album spicy. Is this the first kids album with heavy metal riffs on it? I’m not sure, but I guarantee it’s the first with heavy metal riffs mixed with folks ballads, country, and cajun music.

Nature Jams also gets extra animal crackers for great packaging and presentation with the CD that includes a bonus DVD with four videos, which are also playing on the new music video channel for kids, www.mykazootv.com.

In a funny twist of fate, Jason Ringenberg, known most for his manic frontman antics with The Scorchers, found a way to mature in his music career by singing to kids. His honesty, genuineness, engaging nature and fun-loving style make him a natural children’s entertainer, and makes Nature Jams such a true and cool extension of his natural character.

Farmer Jason has been around since 2003, and won an Emmy Award in 2009 for his work with Nashville Public Television.  He’s on the myKaZoo Music label with Universal.