Frankie Ballard is right there. On the brink. Just a few little tweaks away from being something really cool in the country space that’s missing and necessary; someone with a classic cool factor like Dwight Yoakam had when he burst onto the scene. We’re used to seeing the parade of bros all done up in their backwards baseball caps and beat up T-shirts with manicured holes in them. But Frankie Ballard is a space apart from all of that, and a more authentic character whose a little bit behind the trend cycle in a good way, and looking a bit lost in today’s mainstream.

You want to root for Frankie Ballard, because we need a young kid like him to come onto the scene like a James Dean character and shake things up by showing the others the true and timeless definition of “cool.” But alas, when he opens his mouth, those cringe-inducing cliches about beer and girls come flowing out, and you just about want to throttle yourself. Yes, there’s real instrumentation behind it, and just a little bit of rock and roll to suck you in and keep you slightly interested. But ultimately, the idea of Frankie Ballard remains much better than the result.

El Rio is Ballard’s third album, and it has a number of really infectious, but intelligently-crafted songs on it that aside from the considerations of genre loyalty or quality of songwriting are just plain good listening. There’s a song on here called “L.A. Woman” that has a quirky, built-in key change that really grabs your attention, while finding a great groove leading into a juicy chorus, and is ripe for hitting repeat on. There’s another song called “Sweet Time,” that’s a little slower and swaying, and like “L.A. Woman,” works like a late 80’s white T-shirt innocent and enjoyable rock song that is reminiscent of a better time in music. 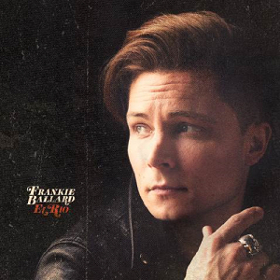 These two tracks happen to not just be the best selections from El Rio, but the duo of songs from the album that Frankie co-wrote, implying that if Frankie Ballard was left to his own devices, perhaps he would come up with something pretty damn cool, especially for the mundanity of mainstream country. But ultimately these songs illustrate the outliers, while a few of the worst tracks on the album work to indict the entire work for unforgivable crimes and misdemeanors against country music, especially the song “Little Bit of Both.”

“You’re a naughty little wine
In a hip hop line
You’re a William Shakespeare sonnet
Jerry Jeff, JAY Z
You got a middle of a bench seat
Baby with your nickname on it”

Please, nobody inform Jerry Jeff Walker his name just got dropped in a “country” song beside Jay Z; we’ve lost enough country legends this year. Ben Hayslip’s grubby little handiwork is all over this country music embarrassment. And dammit Frankie Ballard better hope they release this song as a single and it makes him a million dollars, because otherwise he just gave up his meal ticket with fans of meaningful country for the foreseeable future for nothing.

But mostly, El Rio sits somewhere in the middle. “Wasting Time” has a good groove and could almost get lumped into the positive pile of songs, except that it says “girl” 24 times. Yes, 24 damn times. It’s little decisions like these in the songwriting that keep this record and many of its songs from being as cool as they could be, which is frustrating. An act like Florida Georgia Line, you can just write them off completely. But you know there’s a nugget of authenticity and coolness inside of Ballard. It’s just trying to ferret it out in the impossible environment of mainstream country that makes it feel so frustrating.

And moreover, it must be pointed out that El Rio really isn’t a country record. There’s not one country song or country moment to take away from it. At the risk of committing country music sacrilege, you could make the argument that even Sam Hunt’s Montevallo has more country on it. At least there’s the appearance of a banjo on that record, and songs about small town stuff here and there. El Rio is a straight up rock record, and though that might be more agreeable than an EDM fest, it would be hypocritical to not point out it’s lack of country-ness.

READ: Song Review – Frankie Ballard’s “It All Started With A Beer”

And taken as a rock record, there’s a handful of really solid songs to walk away from the project with and be happy. A little imponderous, but “L.A. Woman” is kind of a jam, like a deep cut from The Cult, and we shouldn’t judge ourselves or others for enjoying it. Ballard’s cover of Bob Seger’s “You’ll Accompany Me” is not half bad, and the final song “You Could Have Loved Me” at least attempts to instill this project with some meaningful moments.

But the ultimate failing of El Rio is we all know it could have been much better by unleashing what is truly at the heart of Frankie Ballard’s passion for music, and allowing him to do his worst and see what happens. He could be the throwback 50’s style guitar-slinging country rock rascal that all the guys want to be, and all the girls want to screw. Instead we only got glimpses of that, just enough to frustrate you, and enough Bro-Country moments to throw many off the scent, and sour the whole thing for others. This is Frankie’s third record on a major label. Will he get a fourth? Whatever happens, hopefully we eventually get and album where Frankie Ballard is Frankie Ballard, and before he loses his suave and himself to the machine, so our suspicions of him as a badass can be validated.

(despite a few decent songs)